In the Lone Star State, Dallas and Houston tend to get the most recognition for international dining options. But San Antonio’s food scene has grown exponentially over the past decade. While you can still find Tex-Mex restaurants and barbeque joints on nearly every corner, a plethora of international dining options have popped up over the past decade. Some are situated along the River Walk and downtown, while others are located in strip malls.

In 2022, San Antonio restaurants accounted for seven James Beard nominations. That’s on par with both Dallas and Houston. And the fact that one of the four Culinary Institute of America campuses is located at Pearl has helped give the local food scene credibility around the country. New York pizzaiolo Roberto Caporuscio, who has trained more than 300 pizza makers around the country, refers to San Antonio as one of his favorite food cities.

From West African and Chifa-Nikkei to tapas and Tuscan with a Texan twist, here are 10 restaurants that prove there’s more to San Antonio’s food scene than Tex-Mex and barbeque.

Located in Pearl, just a few dozen steps from the San Antonio CIA campus, Botika is owner and head chef Geronimo Lopez’s nod to the chifa cuisine he grew up eating in Caracas. While chifa refers to the fusion of Cantonese and Peruvian food, Lopez refers to his menu as Chifa-Nikkei. Sushi, poke and ceviche make up half the menu, while the rest consists of wok dishes, grilled meat, fish and vegetables, as well as a handful of small plates that would leave some wondering if Asia and Latin America were once connected by land.

The menu does seem to bounce around quite a bit. If you’re wondering where the idea for papaya salad at a chifa restaurant came from, you have to consider that Geronimo Lopez has lived and worked in seven different countries spanning three different continents. While you can’t go wrong with anything on the menu, the wok dishes are the most popular. The short rib noodles have enough tender meat served over a large bowl of yakisoba noodles to qualify as two separate dishes. 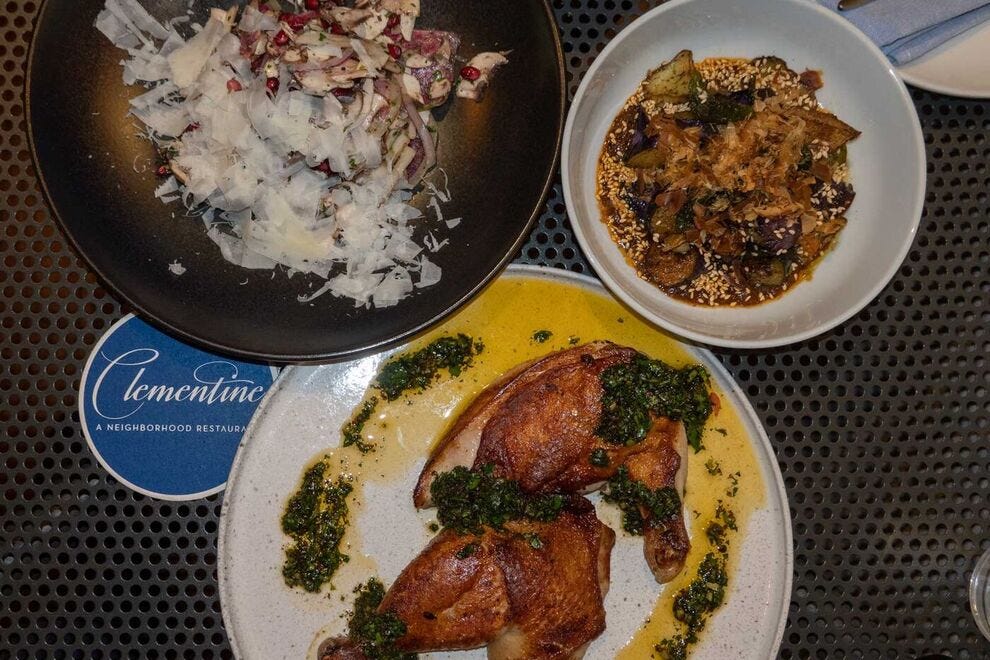 This 2022 James Beard semifinalist has a neighborhood feel, despite being located in a strip mall. The husband-and-wife team of John and Elise Russ opened Clementine in 2017 after years of experience in the restaurant industry. He is the head chef, while she makes the pastries.

Every dish here seems to have a story. The chamomile brined spatchcock chicken started as a friendly competition between father and son. The herbs for the chimichurri sauce comes from the Russ family garden. And most of the ingredients at Clementine come from within 80 miles of San Antonio. Even the mushrooms used in the popular white mushroom salad come from Texas.

For dessert, try the Clementine crunch bar, which is Elise’s signature dessert. The bar has a crunchy bottom, silky smooth top and is served with fresh clementine slices, hazelnuts and clementine sherbet.

Most dishes have at least one ingredient that you may have to search online. If you’re reasonably adventurous, try the ‘Feed Me’ option. According to co-owner and head chef John Russ, this is what roughly one-third of their patrons go for. For $72 per person, the kitchen will prepare a special menu for you based on what’s in season. 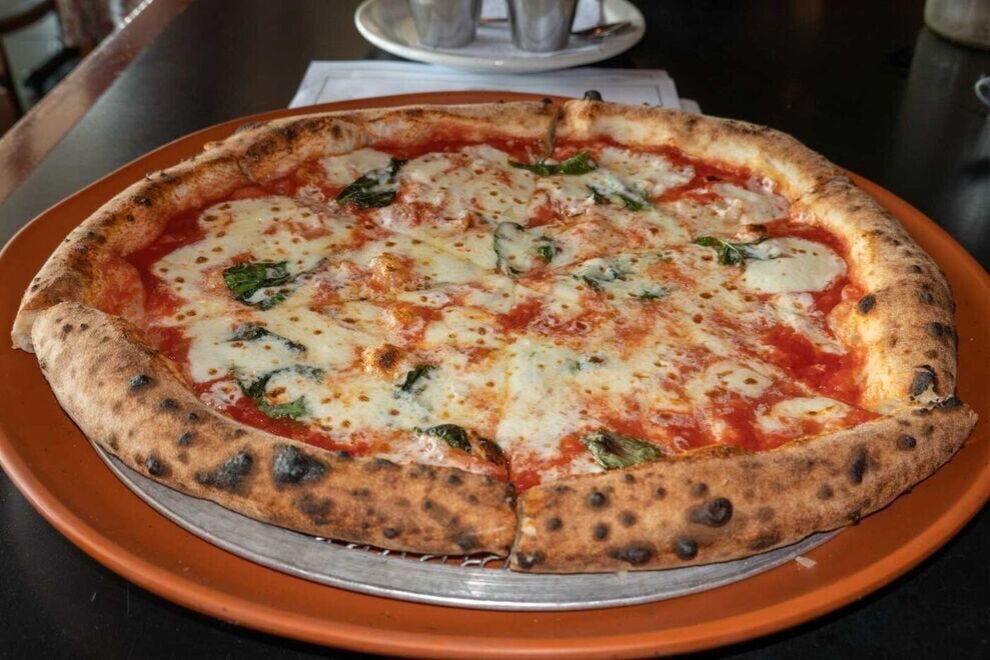 While you’d expect the name ‘Dough’ to be an obvious pizza reference, it’s actually an amalgamation of co-owner Doug Horn’s first and last name. The California native and CIA graduate gave up his secure head chef job in the northeast to learn pizza making from a small place in Connecticut. After his apprenticeship, he and his wife moved to San Antonio with the mission of bringing authentic Neapolitan-style pizza to the Alamo City.

They make their own fresh mozzarella in-house every day. That’s what they use in their namesake margherita, which was featured on the Food Network, along with seven other menu items. Doug recommends the signature burrata for an appetizer, along with their namesake margherita and tiramisu. And while the meat-centric pork love pie is a huge hit in Texas, they’ve been unable to get clam pies on the menu, despite a couple attempts at offering it as a special.

As of this writing, they are shipping four of their pies nationwide via Goldbelly. 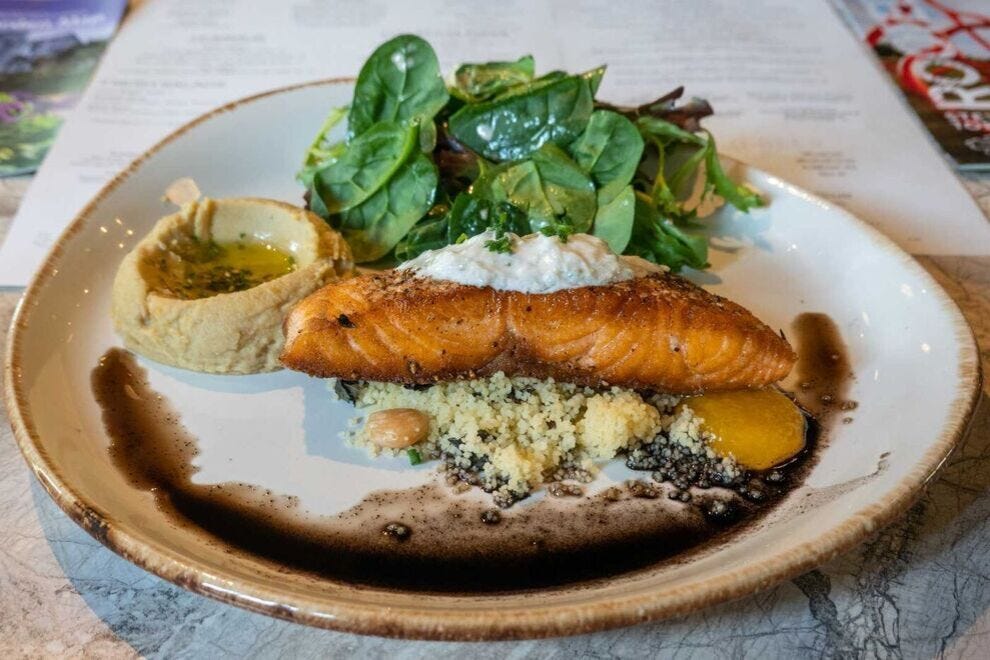 Located at the San Antonio Botanical Garden, Jardin is one of Texas native Jason Dady’s four area restaurants. The menu is Mediterranean-influenced, with small (mezze) plates and a handful of entrees. The pan-seared salmon is like a culinary cruise from Morocco to Tel Aviv with a stopover in Greece. They serve the perfectly seared salmon over a bed of couscous soaked in charred cumin oil and top it with a large spoonful of tzatziki. The hummus and fresh bed of greens are served on the side, along with a small bit of apricot puree.

For dessert, try the olive oil cake with saffron chantilly. Everything on the plate is edible, from the rich honey-mascarpone to the almond nougat to the raspberries and petals that line the outer layer of this artfully presented dish. 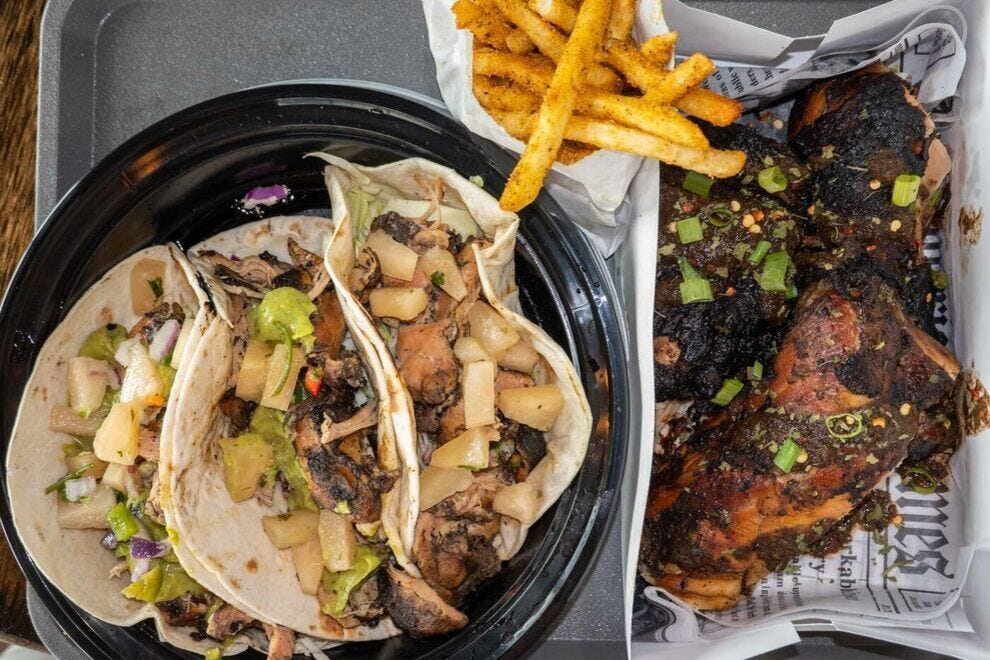 The Jerk Shack feels like a collection of the best Jamaican street food stalls brought indoors to a spotlessly clean cafe off the highway. They sell their namesake signature dish in multiples of three and serve it in newspaper. You need to try the curries as well. Owner, chef and CIA graduate Nicola Blaque grew up in the Manchester Parish of Southern Jamaica. Sunday was curry day, and at The Jerk Shack, all curries are sautéed to order.

Chef Nicola also owns Mi Roti, which is a Caribbean street food stall currently operating out of the small food hall at Pearl. Jerk chicken and masala fries are the only overlap between menus. She got the idea for the latter during a trip to California. The thin fried potatoes are tossed in a mix of salt, pepper, sugar, turmeric and garam masala. 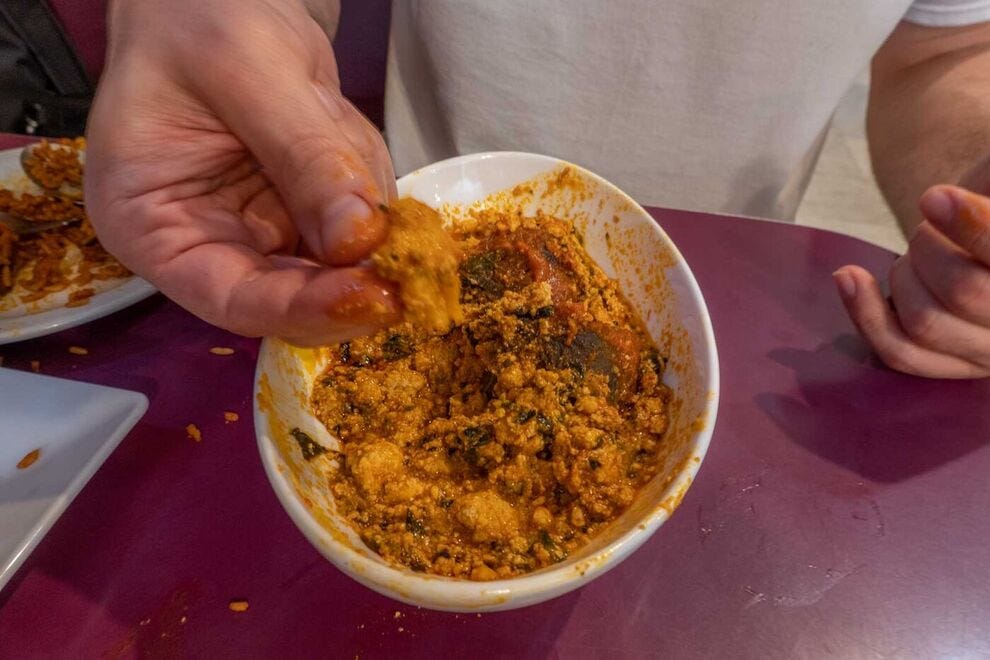 Lagos is one of the newer West African restaurants scattered throughout San Antonio. Inside, the place is super informal. Chef and co-owner Adenike (Nikki) started cooking as a child in her native Nigeria. Her and her husband Lanre (Larry) opened Lagos in August 2021. More than three-quarters of the ingredients come from their homeland.

Jollof rice and egusi with fufu are two of the top sellers. Either will likely be enough for two people. The jollof rice gets its hot and smoky flavor from red pepper. Egusi has a moderate spice level, which takes a few seconds to kick in. To experience the maximum level of West African spices, try the water (meat on a stick) or pepper soup.

If you’re not familiar with Nigerian or West African food, ask the staff about the proper way to eat their signature dishes. While spoons, forks and knives are available, many dishes are traditionally eaten with your hands. For example, egusi is referred to as a soup, but the proper way to consume this hearty dish is to take a tiny bit of the dough-like fufu and dip it into the soup as you would bread into a dipping sauce. 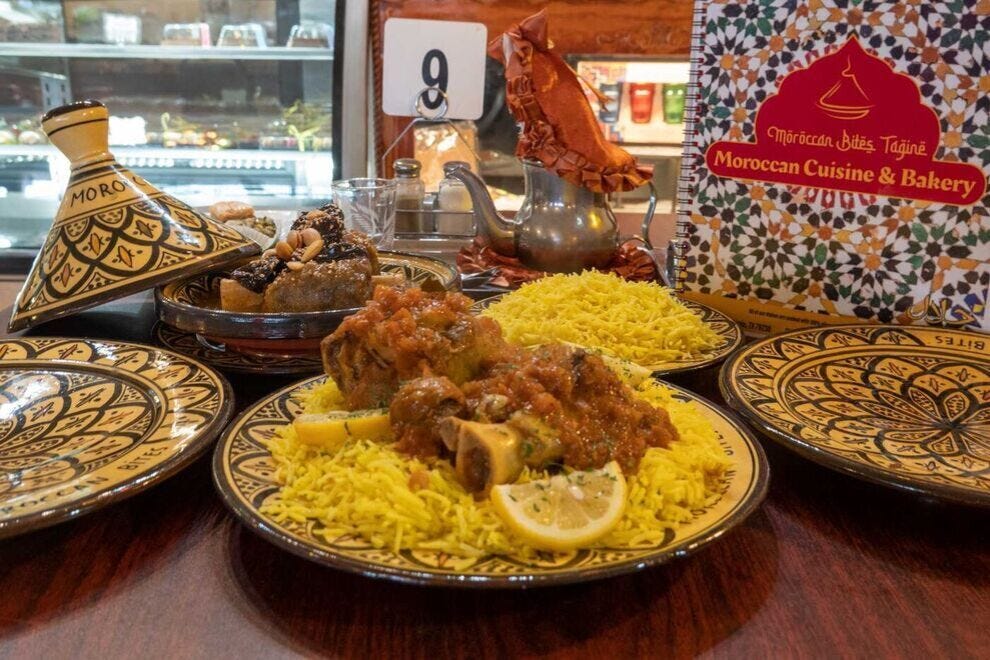 When you enter Moroccan Bites, it’s impossible to miss the dozens of accolades that line the dining room wall. San Antonio’s only Moroccan restaurant was featured on Season 12 of “Diners, Drive-Ins and Dives.” The Marrakesh-born sisters who (along with their mom) run this small cafe like to boast that their regular customers no longer need to see a menu.

The lamb shanks are the top sellers, and all of their desserts are on display and made in-house. A few of their lamb shank options are served in a traditional Moroccan tagine along with a generous portion of saffron rice. Both the tagines and the argon oil they cook with are available for purchase. 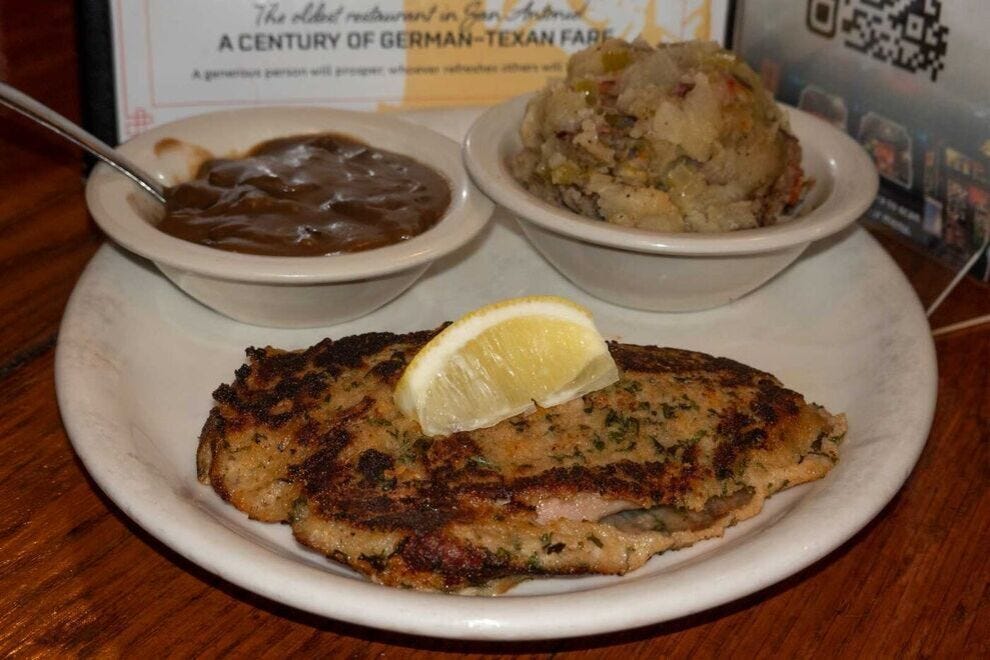 San Antonio’s oldest restaurant is known for German food with a Texas twist. Combinations that don’t make sense in the rest of the United States seem commonplace at Schilo’s. You’ll see people drinking beer in the morning here, just like in Germany. And Schilo’s famous root beer will likely be on every other table. They have seven different spiked versions with ingredients ranging from Wild Turkey to Baileys Irish Cream.

When it comes to German-Texan fare, breakfast is the main attraction here. Although they serve breakfast all day, the Reuben is their number one seller, followed by chicken and dumplings, as well as schnitzel. For dessert, try the Texas sheet cake, which is layered with their root beer ganache. And before you leave, grab a six-pack of their famous root beer to go.

The Lyons family has owned Schilo’s since 1980. They also own Casa Rio, along the River Walk. 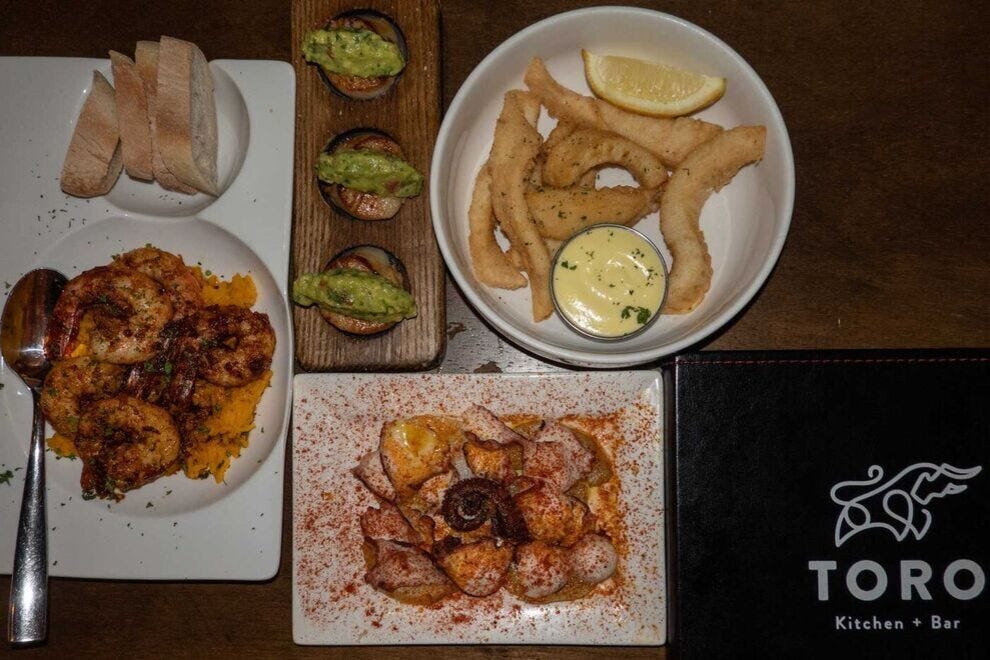 Their slogan is “Spain is closer than you think.” And Toro was designed to feel like a tapas bar in the Spanish coastal city of Alicante. That’s where some of the best Spanish rice and paella comes from. Besides the couple dozen different tapas, pulpo, paella and jamon are the main culinary attractions here.

And Toro also has one of the most impressive wine selections in the Alamo City. In fact, they have one table in a special wine room and another in a jamon room, where you can dine surrounded by imported hams that likely sell for more than a month’s rent in New York City. 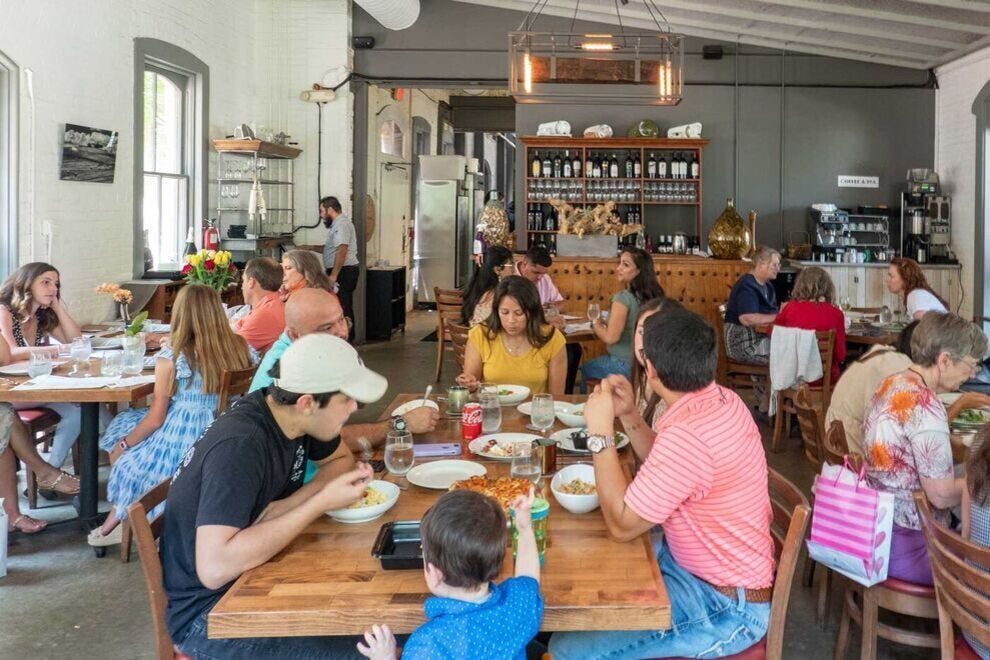 Located at the San Antonio Museum of Art, Tre Trattoria specializes in Tuscan cuisine with a Texas twist. A perfect example of this is chef Jason Dady’s South Texas heritage pork with pappardelle. The ultra-wide house-made pasta noodles sit atop a bed of white beans, Calabrian chiles and mint. The dish is garnished with a large spoonful of roasted garlic black pepper crema. They make their thin-crust pizzas using cast-iron rather than the traditional Neapolitan-style oven.

We recommend coming on a Wednesday night, so you can try their fresh mozzarella-stuffed wagyu meatballs. For dessert, try their Signature Nutella X3.