In just a couple of years, the Bay Area’s culinary landscape has changed dramatically from one focused on in-person dining to one in which cozy take-home and delivery options, and health-conscious eats reign supreme.

In 2022, while we expect ghost kitchens and convenient gourmet condiments and snacks to continue to rise, we are also expecting the return of restaurants, especially those focused on previously under-represented food traditions and ingredients.

Here are six food trends to keep an eye out for this year.

A significant East African population in the Bay Area has engendered dozens of stellar Ethiopian restaurants from San Francisco to San Jose. But considering the diversity and size of the African continent and its diaspora, it’s a mystery why so few restaurants specializing in its other food traditions exist (and why those that do, including Oakland’s Miliki and SF’s Radio Africa Kitchen, have struggled to survive).

Over the last several months and looking forward to 2022, that tide is finally turning. In West Oakland, the Jolly-Jolly Coffee & Kitchen, which specializes in such Nigerian dishes as jollof rice and egusi soup made with seeds and leafy vegetables, is coming up on its first anniversary. The Oakland Food Hall has recently welcomed two ghost restaurants, the Côte d’Ivoire eatery Alloko Garden and The Bussdown, which specializes in pan-African comfort food, while in East Oakland, the two-year old Nigerian cafe Ruth’s Buka is still going strong . As Bay Area eaters become increasingly familiar with the diaspora’s flavorful cuisine and more novice restaurateurs take advantage of the reduction of barriers for take out/delivery and home-based kitchens sparked by the pandemic, we expect to see a surge in the availability of African foodways through 2022 and beyond. 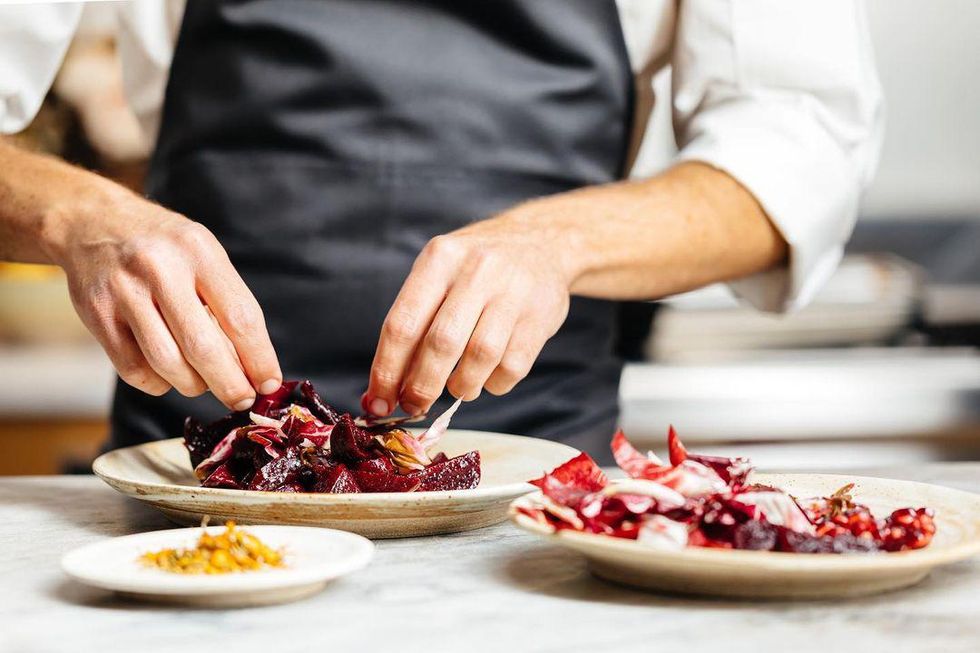 There is every indication that 2022 will be the year of plant-based eating. It’s already hit the mainstream big-time, with plant-based options appearing everywhere from McDonald’s and KFC to Bay Area staples like Gott’s Roadside and Souvla—but you ain’t seen nothing yet.

Sure to make the biggest splash this year is the eagerly anticipated, all-veggie Little Saint from the Michelin-starred team behind SingleThread, which is set to open this February in Healdsburg. Other restaurants big and small are expanding their plant-based offerings including Rooh and Beit Rima, both of which will feature local company Black Sheep Foods’ vegetarian lamb (which is already on the menu at Souvla), and pizza joint Joyride. And don’t miss Italian restaurant Baia, Salvadoran pupusa purveyors Nixta, and vegan coffee bar and kitchen Beach’n, all fledgling plant-based eateries that are spreading their wings in 2022. 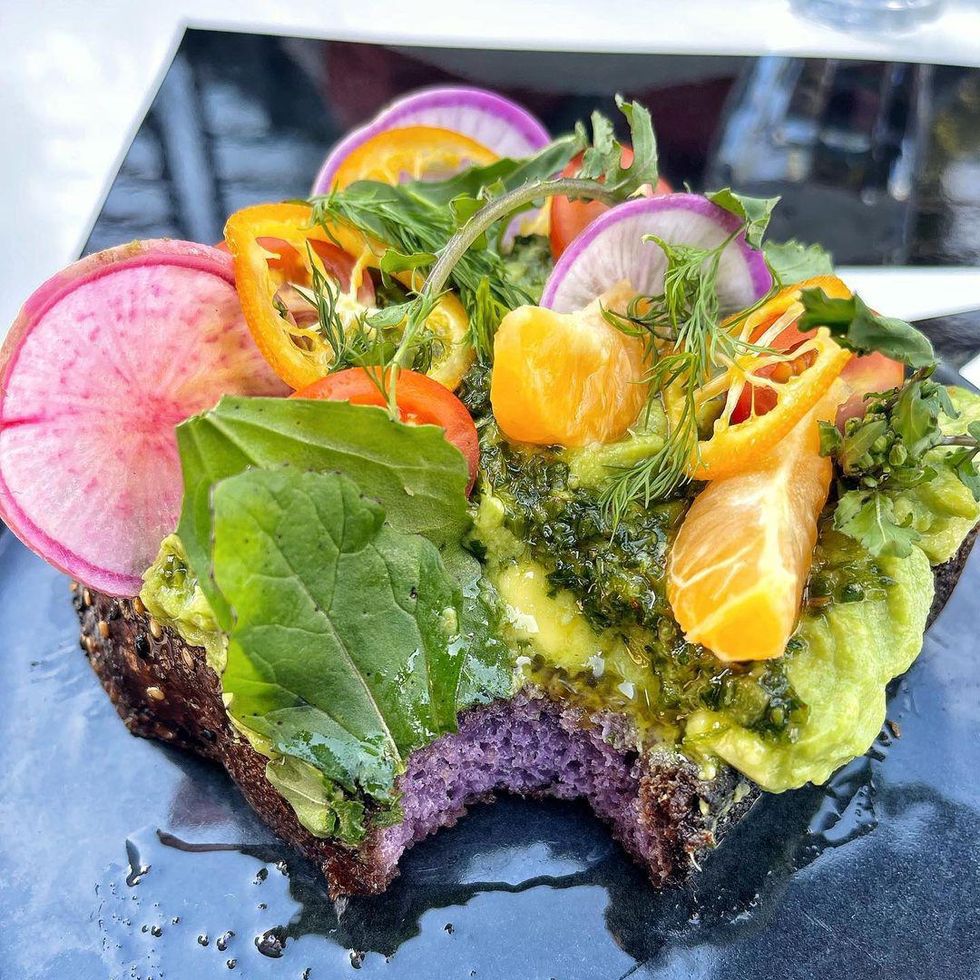 Filipino food captured the Bay Area zeitgeist starting around 2016. Now in 2022, a second wave centered around ube, a purple yam originating in the island nation, is afoot—and not just at restaurants and cafes dedicated to Filipino cuisine.

Ube is currently worming its way into everything from cocktails to pastries. Find the former in Wildhawk’s Mekong Sleepwalker, a vibrant coconut milk and whiskey colada, and in Kona’s Street Market’s Red + Blue, a 7×7 Big Drink winner made with aged rum, coconut cream and pineapple. Of the latter, you’ll find a massive range of sweet ube treats, from ube tres leches cake to ube tiramisu, on the menu at the brand new East Bay sensation Cafe 86, and on the dessert menu of rising-star chef Ravi Kapur’s new pan-South Asian–heritage restaurant Good Good Culture Club. Above all, don’t miss Abacá’s various takes on the tuber, which include both sweet and savory preparations like crispy octopus with ube, savory grapes and patis-mansi slaw; avocado toast made with ube sourdough from Rize Up Bakery; and ube macapuno ensaymadas. 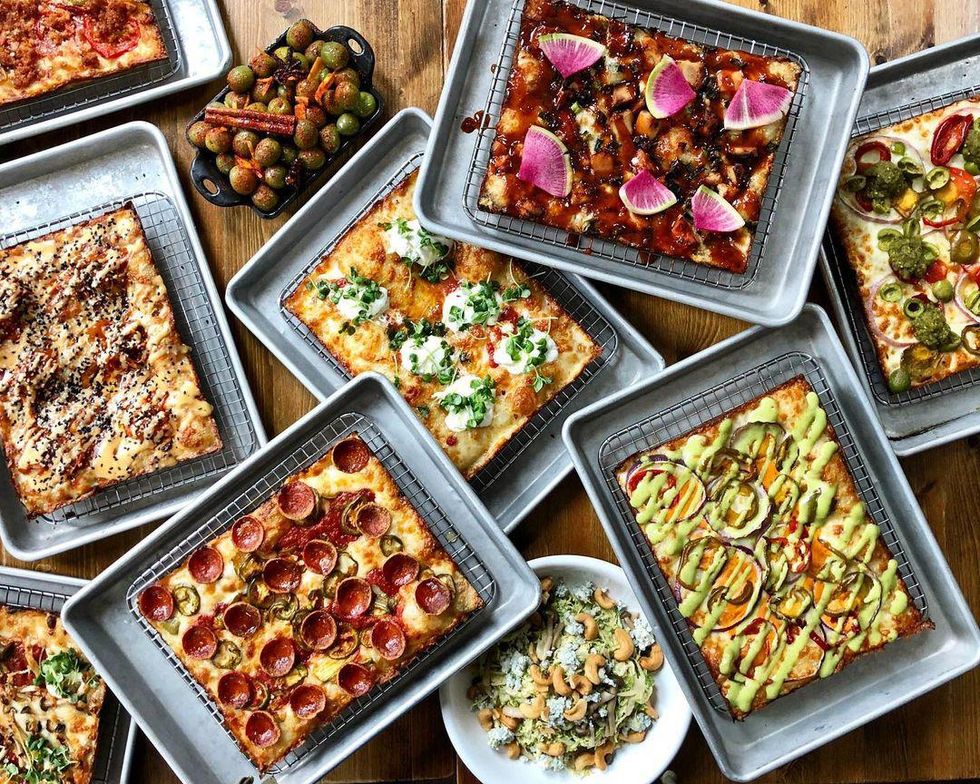 8 Mile Detroit Pizza is one of the vendors working out of Oakland Food Hall.

The pandemic didn’t create the ghost kitchen (sometimes called a cloud kitchen), but it did turn the concept—takeout- and delivery-only restaurants working out of a co-cooking facility—from a small-scale venture to an industry worth hundreds of millions of dollars.

There’s good and bad aspects to ghost kitchens. On the one hand, they give food entrepreneurs the ability to launch a business with limited start-up funds which, in turn, leads to more innovation, creativity, and representation in the restaurant industry. On the other hand, with no brick-and-mortar space, they are difficult to market and must rely on delivery apps that take a chunk of their profits (and don’t even get us started on unauthorized restaurant clones). Regardless, ghost kitchens like the Oakland Food Hall, All Day Kitchens, and Local Kitchens are poised to continue growing in 2022 and, in our opinion, the Bay Area food landscape is better for it. 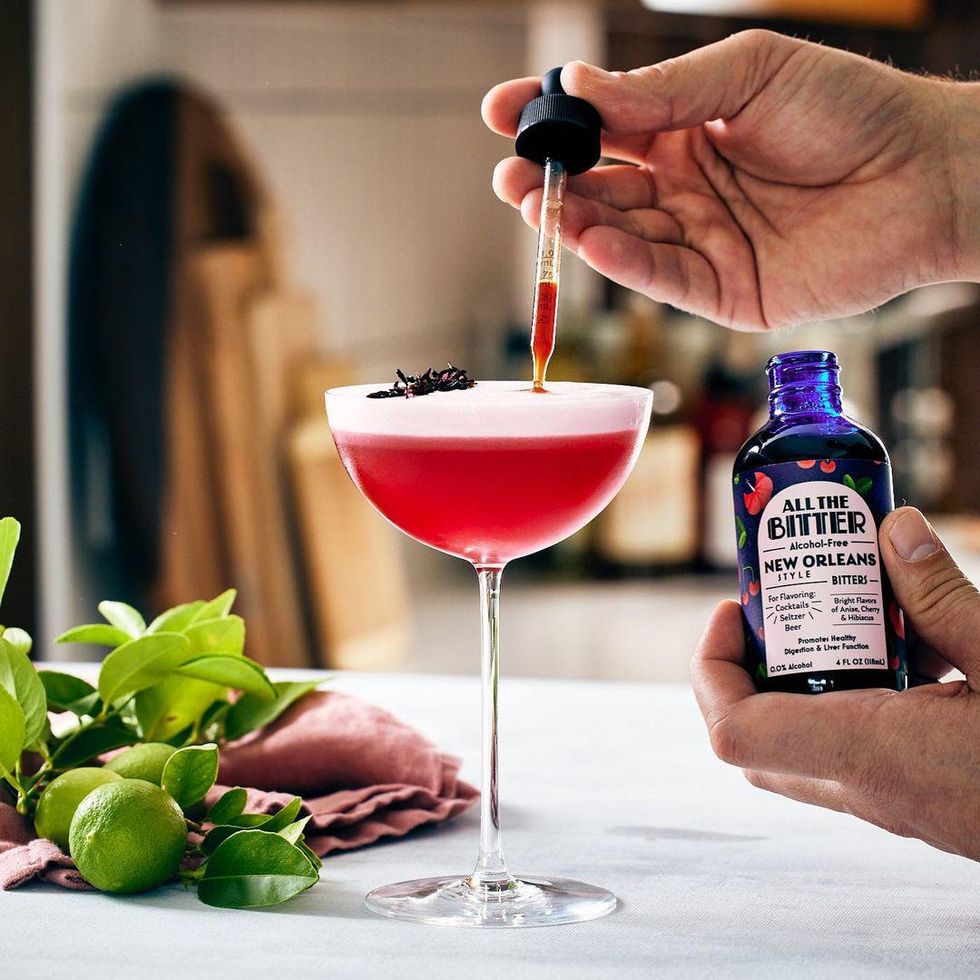 Alcohol isn’t exactly out in 2022 but NA (non-alcoholic) spirits and wine are quickly gaining ground. Restaurants new and old, fancy and down-to-earth, are expanding their bar programs to include beautifully crafted mocktails with the flavor and snap of a traditional artisan cocktail. At late 2021 newcomer Ocean Beach Cafe, they’ve even developed an hour-long #SOBAR tasting experience ($25) featuring everything from NA beer and wines to NA aperitifs and digestifs. (Try the Mezcal Madre, on our list of the 50 most iconic cocktails in SF.)

A growing range of bottled and canned NA spirits and wines are also emerging from local distillers and vintners. The former sommeliers of Michelin-starred juggernaut The French Laundry just released All The Bitter, a line of NA bitters made from organic and wild-foraged ingredients like dandelion, burdock root and milk thistle, while Mill Valley’s Free Spirits distills non-alcoholic bourbon, gin, and tequila. On the wine tip, check out Trinchero Family Estate’s Luminara, a chardonnay blend minus the alcohol, Ariel Vineyards’ de-alcoholized cabs and chardonnays, and the new H2O Sonoma Soft Seltzers, an effervescent NA drink made with natural wine grapes. 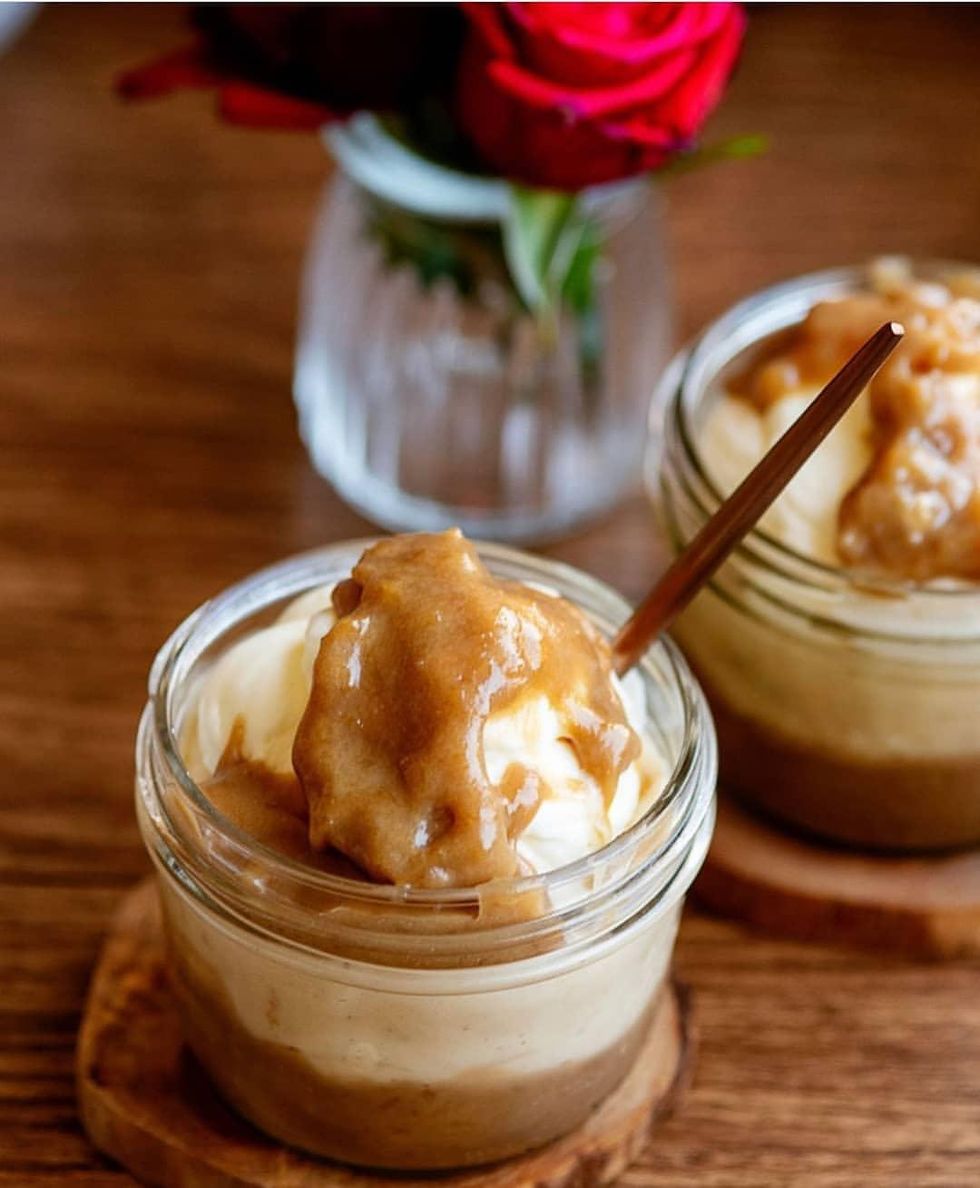 Restaurants still haven’t recovered from pandemic-related shutdowns and interruptions, but gourmet snack shops and condiment creators are doing a brisk business keeping us conveniently well fed. Recent months have witnessed the arrival of a variety of new businesses that specialize in a single delicious variety of food, including Yes Pudding in the Ferry Building, which offers both savory and sweet puddings including its signature banana. Berkeley’s Squabisch, meanwhile, is a bakery dedicated to all things pretzel.

Artisan condiments and take-home sides, which became increasingly accessible once the whole world found itself eating at home, also continue to rise in ever more unique and interesting ways. Among the many that have caught our eye in recent months are the housemade banchan (and tofu) from Oakland’s just-opened Joodooboo, Sichuan sizzle crunch from Side Hustle Condiments, and Nigerian roasted pepper obe ata dindin sauce from Èkó Kitchen.