There are a few different theories as to when humans first began to produce and enjoy ice cream. One possible origin story traces the sweet, cold confection back to the Tang Dynasty of Ancient China, which lasted from roughly 600 to 900 CE. By the Middle Ages, versions of ice cream were enjoyed across much of Arabia and Europe. And now, of course, people worldwide love the stuff.

Whereas in ancient and Medieval times, the process of creating ice cream was often painstaking and laborious—Tang Dynasty producers blended milk with flour and camphor and then froze the mixture in metal tubes lowered into frigid lakes. Today ice cream is produced on a commercial scale by numerous companies around the globe. And at that commercial scale, sadly quality is often dropped in the name of lowering costs and increasing profits.

If you’re looking for a top-quality, artisanal scoop of the sweet stuff, look elsewhere than these nine ice cream brands, which have been found to use the lowest quality ingredients. And next, don’t miss the 8 Worst Fast-Food Burgers to Stay Away From Right Now.

Take a look at the packaging of most Blue Bunny “ice cream” flavors and you’ll see the conspicuous absence of the words ice cream. Instead, you may see terms like “frozen dairy dessert.” Why? Because many of their products are technically not ice cream, but rather, flavored frozen custard. You’ll also see qualifiers like “vanilla flavored” instead of just vanilla, because, again, it’s often a version of the flavor created by using low-quality artificial ingredients.

Turkey Hill’s ice cream has a sizeable fan base, as you can see from a quick look at one of their flavors via FreshDirect or Target. But their ice creams also have a sizeable number of ingredients that are anything but high quality. These include corn syrup, monoglycerides and diglycerides, carrageenan, and more. 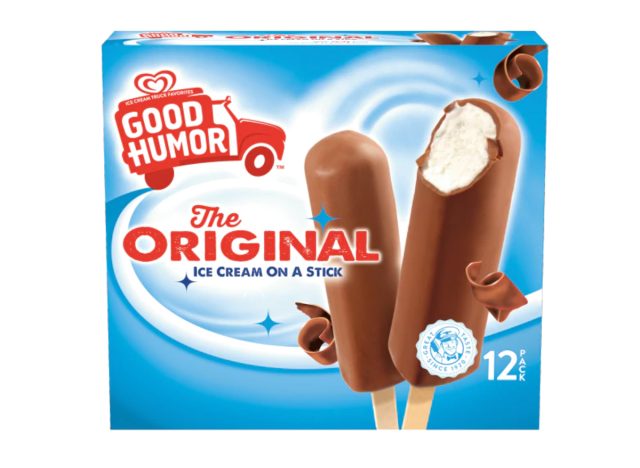 Beloved of many a generation—large for showing up on a truck at just the right time on hot summer days—Good Humor’s ice cream products may be popular, but they’re not high-quality. Take the company’s classic Strawberry Shortcake Bar, for instance. It has approximately two dozen ingredients including, Red 40, Red 40 Lake, and Red 3 for coloring alone. The first two are derived from petroleum, while Red 3, aka erythrosine, is derived from fluorine.

If the whey protein concentrate, whey, monoglycerides, diglycerides, xantham gum, guar gum, and corn syrup don’t turn you away from Friendly’s ice creams, maybe the fat and cholesterol will. A 150-calorie serving of their Classic Chocolate flavor has 80 calories of fat, five grams of saturated fat, and 30 milligrams of cholesterol.

RELATED: We Tried 12 Ice Cream Sandwiches and This Is the Best One

There’s a reason 48-ounce tubs of Walmart’s store brand Great Value ice cream can sell for less than $2.25… it’s made with low-quality ingredients. The brand’s Homestyle Vanilla Ice Cream does not even list vanilla (except for vanilla extract). Also listed in the ingredients are cellulose gel and cellulose gum, which are derived from wood, caron bean gum, guar gum, and more.

Here’s another classic and beloved frozen treat that might be best left unexamined. These chocolate-dipped ice cream cone treats are made with pretty inferior ingredients. Let’s name just five of the 25-plus ingredients you’ll find in a vanilla Drumstick The Original: Dairy Product Solids (that’s the first, FYI, not cream or milk), maltodextrin, Propylene Glycol Monostearate, Cellulose Gel, and Palm Olein.6254a4d1642c605c54bf1cab17d50f1e

RELATED: What Happens to Your Body When You Eat Ice Cream Every Day

Sure, Baskin Robbins is one of the most successful chains out there, and yes, you probably loved it as a kid, but things have changed. A number of years ago, per We Journalsthe company outsourced its ice cream production to Dean Foods, and today, in a scoop of, say, their Cotton Candy flavor, you’ll find cheap ingredients like a “Stabilizer/Emulsifier Blend” (which is cellulose gum, mono and diglycerides , guar gum, carrageenan, and polysorbate 80), and “Cotton Candy Flavored Base” (corn syrup, water, sugar, artificial flavor, sodium citrate, and citric acid).

RELATED: Selena Gomez Has Her Own Ice Cream & I Tried It 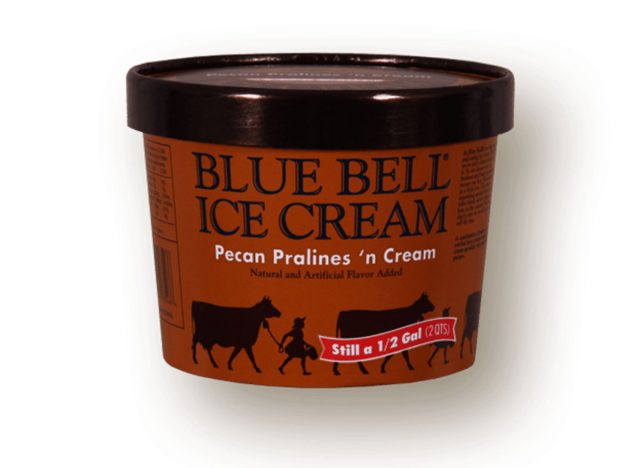 Blue Bell Ice Cream has a popularity problem: according to a Mashed survey, a majority of people find it to be the worst store-bought ice cream. Maybe that’s because they have a quality ingredient problem, too. The company’s Homemade Vanilla flavor features HFCS, cellulose gum, and vegetable gums. Other flavors add in modified food starch, artificial colors, mono and diglycerides, and more. How about just regular milk, cream, and sugar?