At 10 am on Saturday, Australian bistro Lucyd was bustling with energy amid the still heavy-eyed street in Sangsu-dong of Mapo District, western Seoul.

Two women in Lululemon leggings, a family of three and a group of foreign exchange students from Sogang University were among the customers who had packed the venue for what is arguably the best of the day if you have the time to indulge in it — brunch .

They were busy chatting away over the sounds of clanging pans, sizzling bacon and the beeping oven from the open kitchen, all the while digging into wholesome plates piled with Aussie breakfast favorites like smashed avocados and egg bennies and sipping flat whites with exquisite latte art.

But to many, Australian cuisine is identified more as a vibe rather than specific foods — like something sunny, mellow, wholesome and generous.

Harnessing such positive energy, Aussie brekkies are taking the local brunch scene to the next level, one avo on toast at a time.


Loyd Blakely and Kim Ye-won’s cafe-bistro Lucyd takes its customers to the Land Down Under with large servings of brightly colored foods in a space full of sunlight during the day.

And to top off the meal Australian-style, the cafe-bistro offers desserts such as vegan banana bread with in-house blackberry jam (8,000 won) and tiramisu (8,000 won). 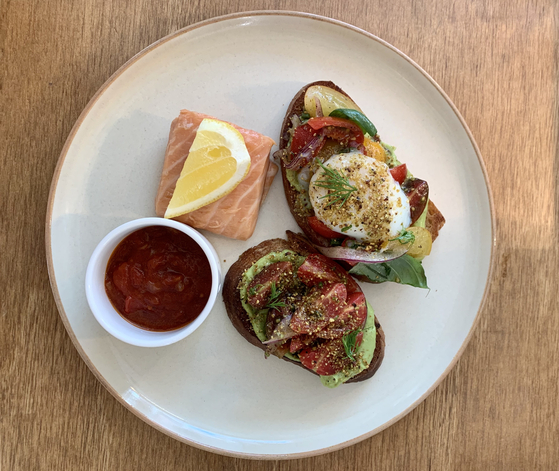 Blakely, 27, said that the brunch culture of Australia stemmed from Britain. Australia was a colony of the British Empire from the late 1780s until the 1850s.

“Before the workers went out to work, they would eat big meals so they wouldn’t have to eat again until dinner. Australian brunches are an interpretation of that.”

Blakely is from Brisbane but moved to Korea and opened Lucyd in November with his wife Kim, 28.

Australian food in Korea began to gain popularity as the Korea-Australia Free Trade Agreement (KAFTA) came into force in 2014, which allowed for more liberalized trade between the two countries and bolstered Australian businesses in Korea.

In the same year that the KAFTA came into effect, Bills, a historic Australian brunch shop in Sydney that is credited to have first served the iconic avo on toast, opened its first branch in Songpa District, southern Seoul. It has overseas branches in Tokyo and London as well. 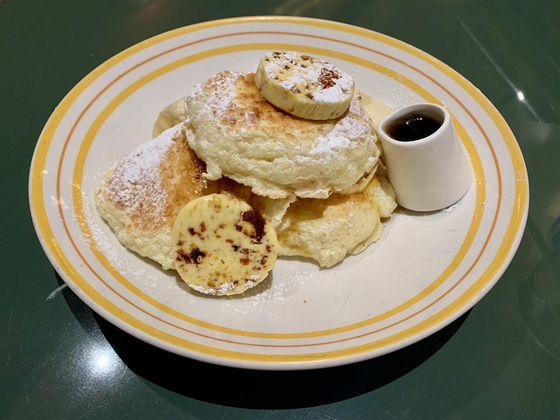 “Bills is the prime example of Korea and Australia’s cooperation and mutual culture sharing in the service sector,” said Bill Paterson during the opening event of the second branch of Bills in Jongno District, central Seoul, in 2016. Paterson was the Australian Ambassador to South Korea at the time.

The two countries’ close relations has led to many student exchanges, which also introduced and spread Australian culture to Korea. 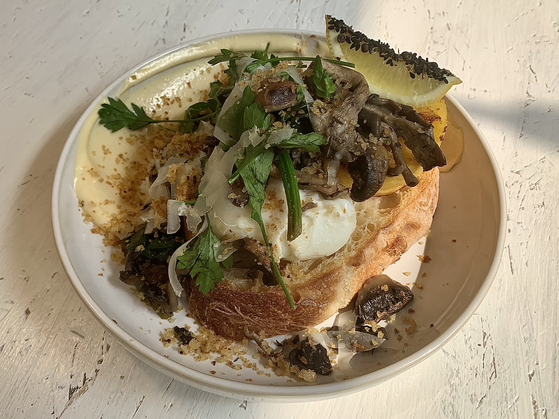 Chef Jeon Min-hyeok, 31, and restauranteur Yoon Shin-hye, 32, were international students and visitors to Australia as well. Upon returning to Korea in 2019, the couple opened Cootha in Mapo District, western Seoul.

According to them, a critical aspect of Australian cuisine is diversity.

“Australian cuisine isn’t afraid to mix and match ingredients from many different cultures into one dish,” said Jeon. “It is important to understand that they incorporate these different ingredients very skillfully.”

Colonized by the British and inhabited by immigrants from Asia and Europe, Australia is one of the most culturally and linguistically diverse countries in the world. Such a multicultural environment provided those in Australia with the freedom to experiment with different foods from cultures around the world.

Such a wide array of ingredients produces incredibly flavorful dishes that taste both familiar and new at the same time.

Coffee: the drink that accompanies every Australian breakfast and brunch.

One of the leading countries in the global coffee industry, Australia is famous for its advanced coffee culture. Renowned food critic Pat Nourse says Australian coffees are “among the best in the world.”

Such a thriving local culture has made it nearly impossible for outside franchises like Starbucks to work their way into the country.

So then what makes a cup of coffee “Australian”? 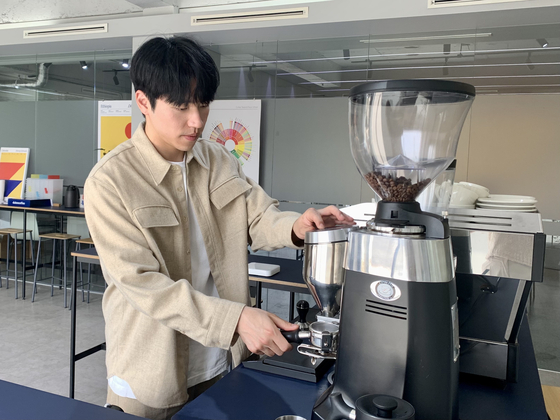 Pebble Company is the official Korean supplier of Australia’s wholesale organic specialty coffee roasting company called Dukes Coffee Roasters. It was one of the country’s first roasting companies that was established in 2005.

“This coffee machine is from Italy and the coffee beans are harvested from countries like Colombia and Brazil — the only part that was actually done in Australia was the roasting of the beans,” said Lee.

He noted that the difference taste is quite minor, especially in today as the local coffee culture has matured to serve more flavorful and higher quality coffee, rather than just darker roast and bitter coffee that is often served in large franchises.

“If there is a distinct characteristic of Australian coffee, it would be that it tends to be lighter and focus more on the original taste of the fruit. But what really sets Australian coffee apart from others is in its culture — a culture of communication between customers and baristas.”

Baristas in Australia are trained not only to make coffee but also to engage in friendly small talk and build relationships with the cafe’s customers, according to Lee.

He learned of this culture when he went to Australia 17 years ago in search of a “perfect cup of coffee” after deciding that he wanted a career in the coffee industry in his early 20s.

“And I found it at Dukes Coffee,” said Lee. “I thought that with this coffee, I could enjoy my work in this business for a long time.”

He worked at Dukes Coffee’s cafe as a barista and then also at the company’s headquarters in Melbourne for four years. 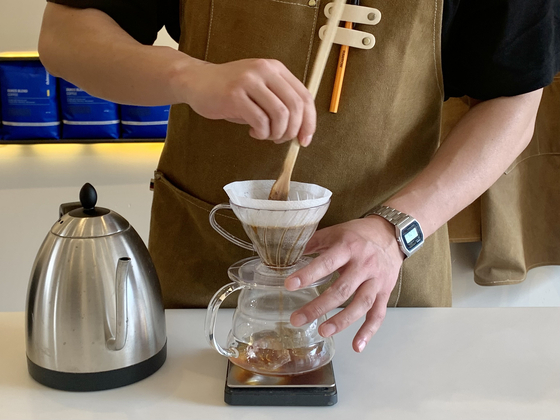 But when Lee said he wanted to start a business based on Australian coffee and its culture, everyone around him urged him not to do it.

“I was told that it would not succeed in Korea because Koreans were already so used to very bitter and smoky-tasting coffee,” said Lee.

But Lee trusted his instincts and was able to convince Peter Frangoulis, the CEO of Dukes Coffee Australia, to give him the license to sell his coffee in Korea.

He established Pebble Company and Dukes Coffee Korea’s showroom in Mapo District in 2015. Since then, his company sends out boxes of freshly roasted beans from Australia to its 300 partnering businesses every day.

Lee also opened a training center in the same district, providing barista training and consulting to its partnering cafe owners. While there are many similar facilities overseas, there are only a few in Korea, according to Lee.

“We not only teach how to make coffee but also how to interact and build relationships with customers,” Lee said. “This is a critical part of the Australian coffee culture, and what I interpret to be the reason behind its success.

“Through the training center, we hope to spread a more open and friendly coffee culture in Korea as well.”

Owners and chefs of brunch restaurants Lucyd and Cootha also described interaction with customers and hospitality as an essential aspect of Australian food culture that they aspired to adopt in their venues.

“When I was in Australia, the hospitality of the eateries’ staff was something that I grew very fond of,” said Cootha’s Yoon. “We wanted to recreate that feeling of a warm, welcoming and comforting atmosphere in Cootha as well.”

She continued, “Of course, the food has to be good, but we don’t strive to serve Australian brunch that only appears genuine in style and appearance. We want to bring the entire culture to Cootha in Seoul.” 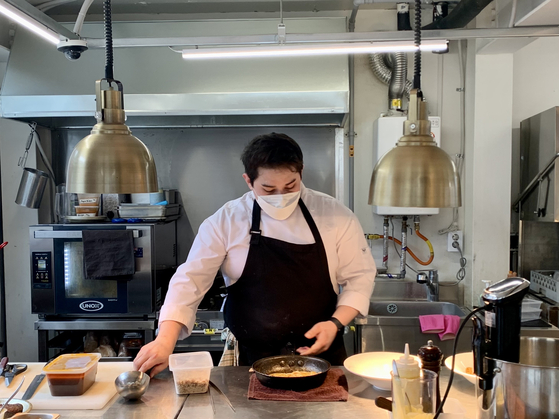 Owners of Lucyd also said that they want to build relationships with their customers and make them feel at home.

The restaurant at Lucyd is designed in a way that encourages small talk between staff and customers, though some Koreans still feel a little bit shy, said Lucyd’s Blakely.

“But we have very outgoing Koreans and foreigners who love to chat with us. […] I think people are getting more used to it, especially in a place that is open like this. They are coming out of their shells more and more willing to have a friendly conversation.”

But he added an important point: In order for the eatery to properly make its customers feel at home, the workers need to know how to enjoy themselves.

“In a lot of the cafes in Brisbane, you can see staff dancing and having fun while they are working, and they wouldn’t be scolded by their bosses,” said Blakely. “It’s people that can do their jobs while also having fun [that we aspire to be]. Because what’s the point if you come to work hating it?”