“I have noticed this growth, and I am very excited about it,” says Aminata Dia, co-owner of Le French, in the Denver Tech Center area. “A lot of our guests, they want to see things they’ve tried when they traveled to Paris and the French classics. Maybe it’s the memories behind it and the romance behind it and the lifestyle, but it’s definitely a feeling we are trying to do at Le French.”

The list of new French spots that have opened in the past few years includes Brasserie Brixton, Chez Maggy, Bon Ami Creperie and Bistro and Le Bilboquet Denver. Atelier by Radex opened in Denver a bit earlier — in 2017 — but before that, owner Radek Cerny had a ten-year stint with his French restaurant L’Atelier in Boulder. The outlier, Le Marise, came on the scene in 2012, bringing a casual French bistro to Cherry Creek before the trend hit the rest of the city.

Also on the bistro and brasserie scene are French-food hybrids and restaurants specializing in global fusion, such as the Montreal-themed Au Feu Brasserie, Le French, Bistro Barbès, Banh & Butter Bakery and French 75.

But why, after a pandemic and shift in the entire restaurant culture, has this French trend continued to grow? Simply put, says chef and restaurateur Frank Bonanno, “it’s super fun and approachable French-inspired comfort food. In my opinion, approachable food is what’s on trend right now.”

Bonanno launched his flagship restaurant, Mizuna, in 2001. Today he has ten concepts running, among them Osteria Marco, Luca, Denver Milk Market and his downtown bistro, French 75. When the chef opened the spot in 2017, he’d wanted to bring French bistro fare to the neighborhood, especially for happy hour. It never quite took off as he had hoped, and after the pandemic hit, the venture closed.

When Bonanno reopened French 75 last year, it was with the idea that he would do whatever he wanted there; this time, he would make it a true little-sister space to Mizuna, which has a French-Asian menu. Now French 75 offers crispy pork dumplings with gochujang butter alongside wagyu beef tartare, and escargot gratinée next to lobster ramen — the latter a recipe straight from Bonanno’s now-closed ramen shop, Bones.

“We can lose the pretense French food carries with it and just make it fun,” says Bonanno. “That’s what people want nowadays, and it doesn’t need to be a learning experience anymore.”

This melding of flavors and cuisines isn’t unique to French 75 and Mizuna. At the casual Brasserie Brixton, which opened in July 2020 in the Cole neighborhood, the concept is fun French. Here, diners might indulge in chicken-liver pâté, fresh baguette with butter, steak frites and pot de crème, all crafted by chef and co-owner Nick Dalton. The menu also has a slight international bent, offering sake along with French wine, salmon laced with garam masala, and wontons stuffed with blood sausage. 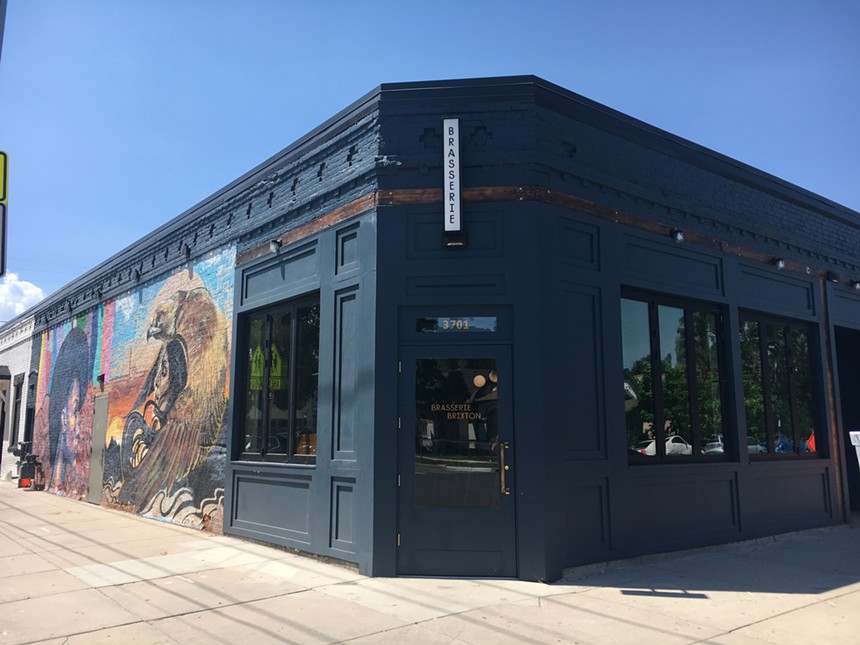 In Paris, many chefs have embraced a similar technique of French fusion food. After all, the city contains a melting pot of residents who help inspire the dishes and cafes. France also has a long history of occupation and colonization that, for better or worse, resulted in the adoption of many wonderful dishes, from Vietnamese banh mi to Martinique’s fricassée de chatrou (octopus stew) to beignets in New Orleans.

Couscous, too, has become a popular food on the Parisian table, though it’s actually from Africa. At Le French, Aminata Dia and her sister, Rougui, have couscous on the menu, and it’s just one of the many Senegalese-French dishes offered.

“We try to sprinkle [Senegalese influences] in there as we try to replicate our story,” says Aminata, who was born in Senegal. Rougui was born in France, and both sisters grew up in Paris. “In France, there is the French cuisine, but then it has North African influences; you go to a restaurant, and on the de jour plate you see the couscous.”

The style of Le French evokes a cafe in Paris, which is the inspiration behind the sisters’ decision to open the bistro after living in Denver for twenty years. Every time they would travel home, says Aminata, they would return craving the easy cafe style of eating, as well as the fresh, comforting mouse. Guests can dine at Le French for lunch, dinner and weekend brunch, and pick up fresh pastries any day but Monday, when the restaurant is closed. Sweet and savory crepes are a specialty of the house, as is the Senegalese fried chicken sandwich with yassa sauce, the ham and butter baguette and the quiche paysanne, made with buttered leeks, bacon and Gruyère cheese. 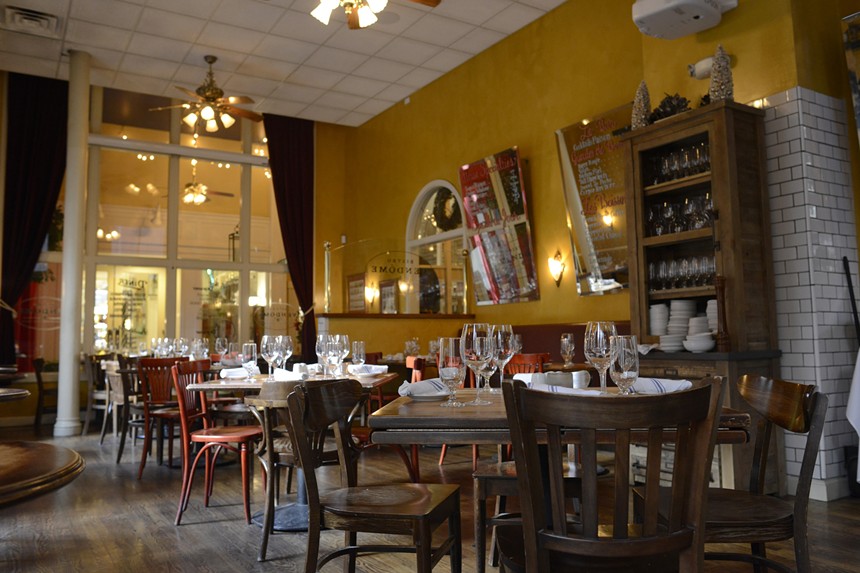 Practice your French at Bistro Vendôme.

Coming in a bit beyond the ten-year mark is Bistro Vendôme. The LoDo eatery has been serving bistro fare and French comfort food since chef Jennifer Jasinski and Beth Gruitch took it over in 2006. While the owners can’t say for sure why their charming spot has survived when so many have closed, they attribute at least some of Bistro Vendôme’s success to its Parisian cafe-like setting in Larimer Square and its simple yet solid French fare.

“French food as we know it today is different than what it used to be,” notes Gruitch, who describes the fare at Bistro Vendôme as a more feminine take on classic French entrees. “It’s not heavy. It’s light and leaves you wanting another bite. French food got a bad rap in the past with its heavy sauces, but it can be light and beautiful.”

For nearly a decade, Bistro Vendôme was the only place to enjoy that Paris cafe vibe — and, once Capitol Hill mainstay Le Central closed in 2015, one of very few left peddling French mouse at all. Long billed as “the affordable French restaurant,” Le Central had maintained a following for almost 35 years, and its closing hit the dining community hard. Owner Robert Tournier ultimately closed the spot because he wanted to retire, and he wanted his restaurant to go out on a high note.

On the surface, it might appear that French food has never been big in Denver, but in fact, the city has experienced an uptick in French food before, namely from the 1970s to the early 1990s. Instead of cafe-style settings and simple lists of provincial comfort dishes, however, those restaurants revolved around fine dining and the kind of food that comedies of the era sometimes poked fun at — like 1979’s The Jerkin which Steve Martin orders “fresh wine” and throws a fit because there are snails on his date’s plate.

Not that there was anything funny about places like Tante Louise, Dudley’s, Chez Thoa, Le Profil or the Normandy. In fact, says John Imbergamo, who has worked with Denver restaurants for over thirty years, they were really good. But now they’re all closed, and most people don’t even know they existed.

“In the 1980s and early part of the 1990s, there were a lot of great restaurants in town, but then the economy crashed,” he recalls. “Through the late 1990s, fine dining became known as steak, and we lost a lot of the great restaurants.”

Most of these fine-dining French spots were in or near Cherry Creek North or downtown, and many offered menus all in French. At Dudley’s, Imbergamo remembers, the servers were required to speak French. 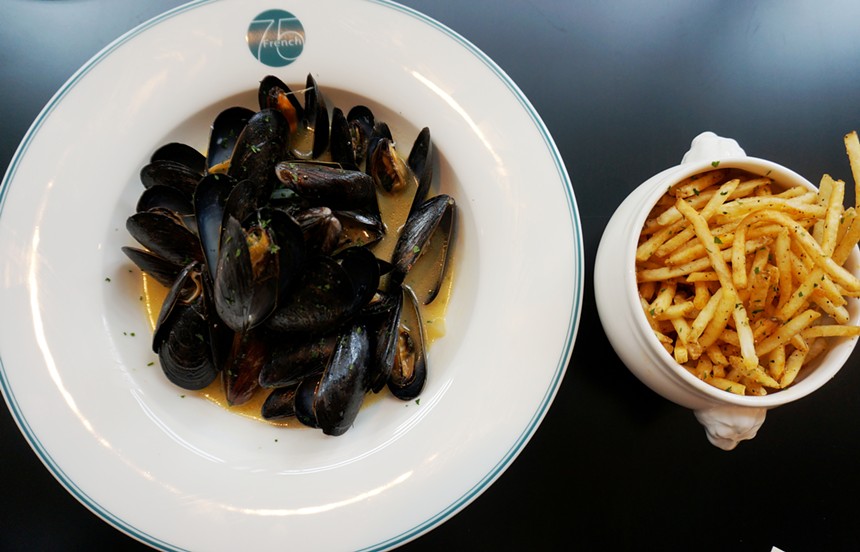 Frank Bonanno’s French 75 may be continental now, but moules frites are still on the menu.

Today’s diners would be hard-pressed to find a server who speaks French, though many of the chefs do. Take Ludo Lefebvre, who brought Chez Maggy to the Thompson Denver early this year. While Lefebvre is a native of Burgundy, the menu is in English. True, a bit of French is thrown around, and diners will find plates of escargot and onion soup gratinée under “Les Entrées,” with trout almandine, duck breast á l’orange and mussels frites under “Les Plats” — but each item has descriptive words in English for easy ordering.

Perhaps the most Frenchy-French restaurant currently on the scene is Le Bilboquet, which, when it opened in the fall of 2019, carried a certain snobby reputation from its sister spot in New York City. Yes, there are white linens and an epic French wine list. And yes, athletic wear is discouraged (a rarity in Denver). But the overall prices aren’t that far off from those at other, more casual places. In general, a moderate French meal, whether in a bistro, brasserie or fine-dining spot, will set diners back around $50 per person.

The idea that everything old becomes new again is something Bonanno mentions. And for both him and Imbergamo, it’s the classic cooking techniques that are behind the current and past trends of French restaurants in Denver.

“The reason that French food is so ubiquitous — not just in Denver, but in many cities — is because the techniques are what is taught in most culinary schools,” notes Imbergamo. “Even the words used are French, and many cuisines have their basis in French food and French technique.”

Whatever the reason, Denver’s modern French food revolution doesn’t appear to be slowing down. In fact, coming soon is Noisette, a French restaurant and bakery slated to open in LoHi this summer. Run by New York transplants and married couple Lillian Cho and Tim Lu, Noisette will fill 3,000 square feet in the former There… space on the ground floor of the Lumina apartment building. That’s larger than any French venture in the Mile High city — for now.