Dust off your dirndl because Oktoberfest Zinzinnati is back this weekend.

As America’s largest Oktoberfest celebration, the event has been honoring the region’s German heritage with food, fun and plenty of beer since 1976. And from Sept. 16-18, hundreds of thousands of people will descend on Second and Third streets downtown to get their gemütlichkeit on. (Last year saw 700,000 attendees, according to the website.)

Favorite big events are — including the beloved Running of the returning Wieners — with some novel attractions. Event producer the Cincinnati USA Regional Chamber says 30% of this year’s food vendors are new, and in addition to highlighting German entertainment, this year’s music lineup has been co-curated in partnership with Radio Artifact.

Ready to gorge on some metts and sauerkraut? Here’s everything you need to know about Oktoberfest Zinzinnati.

The fest is held on Second and Third streets downtown between Elm and Walnut. Admission is free. 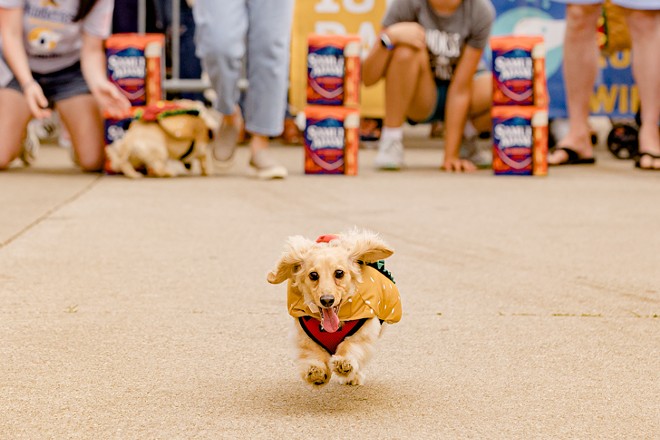 Running of the Wieners

All events take place at the Turfway Park Main Stage at Second and Elm streets, except the World Brat Eating Championship, which takes place at the Braxton Stage at Third and Walnut streets.

Expect tons of local restaurants offering up what event producers refer to as “German-style twists on their menu items.”

There will be expected favorites — roasted almonds, metts, brats, sauerkraut ball, limburger cheese sandwiches, giant pretzels and plenty of strudel — plus some unique dishes. See a full food menu at oktoberfestzinzinnati.com, but here are some highlights.

The weekend’s entertainment blends German-style bands with local favorites. There are multiple stages:

Each has live entertainment scheduled throughout the weekend. There are more than 30 acts slated to appear, including The Royal Klobasneks, Vereins Musikanten with Kolping Sängerchor, the Pete Wagner Schnapps Band, the Polka Warriors and more.

Second and Third streets between Elm and Walnut will be closed for the festival. The City of Cincinnati has not yet released other street closure information, but this blog will be updated when they do.

Send CityBeat a news or story tip or submit a calendar event.