Rico Alexander is on a mission to nourish his community. As the founder of Hopeboy’s Kitchen, a vegan food trailer docked at Tyler Station near Oak Cliff Brewing Co., Alexander wants to provide healthy, delicious food options in a neighborhood where these seem scarce.

HopeBoy’s Kitchen first opened this past January. Alexander himself adapted a vegan diet four years ago, inspired to take up healthier habits after his mother died from cancer at 43 and his father died of a heart attack at 50.

“The closer I got to 43, it just started weighing on me to make healthier choices,” Alexander says. “About 10 years ago, I was diagnosed with Type 2 diabetes. I was overweight and lost 70 pounds to kind of ‘correct’ that Type 2 diabetes, but then that sent me on a journey, searching for which diet or which lifestyle that I needed to start practicing. I did tons of research on veganism, and it seemed like it was in my favor. I started out with a 30-day challenge, and before I knew it, here we are.”

About 25 years before opening HopeBoy’s, Alexander served a four-year prison sentence for dealing drugs in Oak Cliff. During that time is when his mother was sick. While he was able to see her three weeks before she passed — he was out on furlough for a few hours one day — he was unable to be with her during her final moments, which is when it really began to click with him that he had to turn his life around.

Alexander was released in 2001 and on parole through 2006, and since then has never looked back on the “dope boy” lifestyle. His mission since has been to heal both himself and the community in which he sold drugs.

“Just like the person that you’re dealing drugs to, who’s addicted to those drugs, the drug dealer is addicted to that lifestyle,” Alexander says. “You’re trying to obtain as much money and power as you can, but at the end of the day, that’s not going to last. It’s very difficult to get out of the game because it’s a mindset. It’s a culture, and you can be embedded in a culture, and you don’t even know it.”

When he first got into veganism, Alexander cooked meals at home and shared pictures on his Facebook page. People quickly noticed and expressed interest in trying his meals.

“I live in Grand Prairie, but my heart is in like Oak Cliff and South Dallas,” Alexander says. “Because I feel like those are the people that I connect with the most, and where I’ve done the most damage. What eventually happened was I would prepare tons of food, and I would meet everyone at a Target over off of Wheatland and 20. Everybody would come there and just pick up their food at a designated time.”

Alexander’s hustle quickly evolved into pop-ups in Oak Cliff and DeSoto. He was eventually able to purchase a food trailer but initially didn’t have any idea where he would dock his mobile kitchen. He received an offer from the property owner of Tyler Station, the small business and shopping center located near the Tyler/Vernon DART station, and since then he has been operating multiple times a week, serving vegan delights behind Oak Cliff Brewing Co.

Some of his biggest-selling items include the Big Smac with fries, which is Alexander’s vegan take on the Big Mac ($16); chili cheese tots ($12-$15); and a barbecue sandwich made with jackfruit ($16). The Big Smac, made with Beyond patties, tastes unlike any vegan burger you’ll find at the many burger joints opting to include plant-based substitutes on their menus. Alexander uses a house-made spice blend on all of his items to give them a unique flavor.

The chili cheese tots are also great to munch on as you sip beers on the patio of Oak Cliff Brewing Co., but if you’re living both the vegan and the sober lifestyle, HopeBoy’s also offers signature beverages: the Big Meach and the Purple order 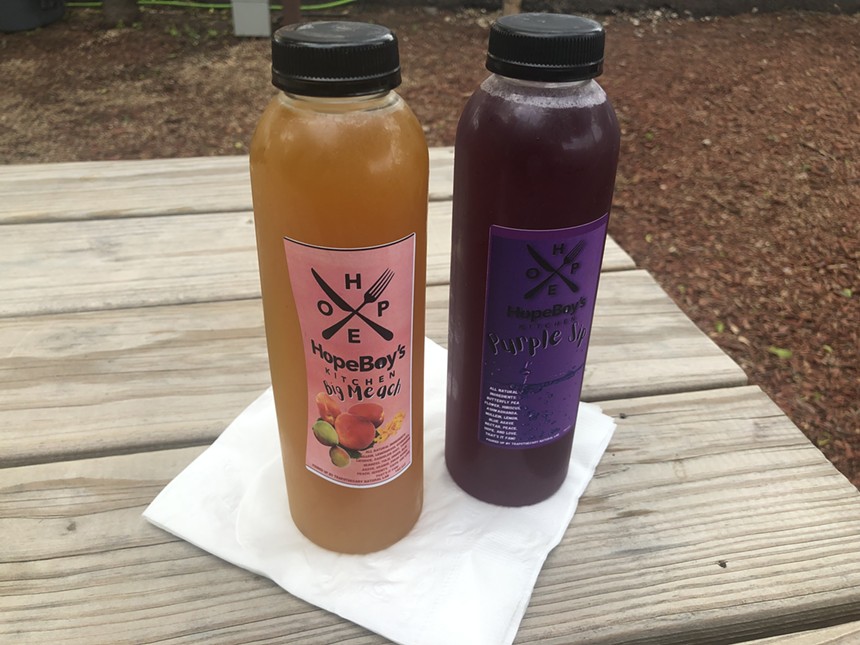 Alexander has two types of teas he sells along with his food: the Big Meach and Purple Sip.

The Big Meach is a mango and peach flavored tea and the Purple Sip is a butterfly pea flower tea with ashwagandha and sweetened with agave ($6 each).

“I think each and every week we’re building momentum, and that keeps me hopeful,” Alexander says. “I just want to spread this vegan food all over the city of Dallas, man. I have people say ‘I’m coming from Fort Worth’ or ‘I’m coming from McKinney’ or ‘I’m coming from Waxahachie.’ I’m grateful for the opportunity to be here in Oak Cliff, and people are willing to even travel with gas being $4 a gallon.”

Over the next five years, Alexander wants to be able to go mobile with HopeBoy’s before opening a brick-and-mortar store and eventually a franchise.

Alexander has been out of the drug dealing game and is committed to righting his wrongs of the past. Now, an avid churchgoer and a purveyor of vegan cuisine, Alexander aims to be an example to those wanting to turn their lives around after emerging from a dark place.

“I did so much dirt in Oak Cliff and South Dallas,” Alexander says. “I think this is my avenue that God has given me to start healing my community … whether you believe in God or you don’t, the reality is, you have to have hope for something to turn around. And if you don’t have the mindset or the heart to hope for anything, you’re gonna stay in a dark place.”