Any foodie worth their pink Himalayan salt knows that while Paris has restaurants to satisfy even the pickiest customer, the City of Light isn’t actually France’s real food capital. Lyon, in fact, has been a morning star for epicures since chefs Eugénie Brazier and Marie Bourgeois turned local working class lunches into Michelin star fare in the 1930s. It’s been a training ground for chefs ever since, and the city’s culinary school, the Institut Paul Bocuseis the only one in France to have a Michelin starred restaurant.

Lyon is clearly a food destination, with more restaurants per capita than any other city in France, and 15 Michelin star restaurants. But while it might seem like a mecca for haute cuisine, you don’t have to spend a fortune to eat well in Lyon. There are plenty of restaurants where you can eat spectacularly without breaking the bank. Just make sure you make your reservation in advance, because the best places tend to fill up quickly.

One type of restaurant you will come across frequently in Lyon is known as a Bouchon. These restaurants, which started as places where women sold home-cooked food to workers to pull in some extra cash, are about as traditional as it gets. The dishes are meat-heavy, and you’re going to want to do a quick google search before ordering, because the Lyonnais are famous for using every part of the animal. But they’ve stuck around for a reason: these are places to get a quality meal for a decent price, and many offer prix fixe menus for lunch or dinner.

La Tête de Lard is a classic Bouchon, serving dishes like the Salade Lyonnaise (bacon and a poached egg over salad greens) and Andouillette en Croûte (sausage made from pig intestines, baked in a pastry shell, and served in a spicy mustard sauce). And for dessert, it’s always a good idea to get a slice of pink praline tart, a local specialty. Enjoy an entrée, main dish, and dessert for only €30, or €22 if you go during the lunch hour. Take in the homey atmosphere with a glass of Beaujolais, and get ready to eat your heart out. 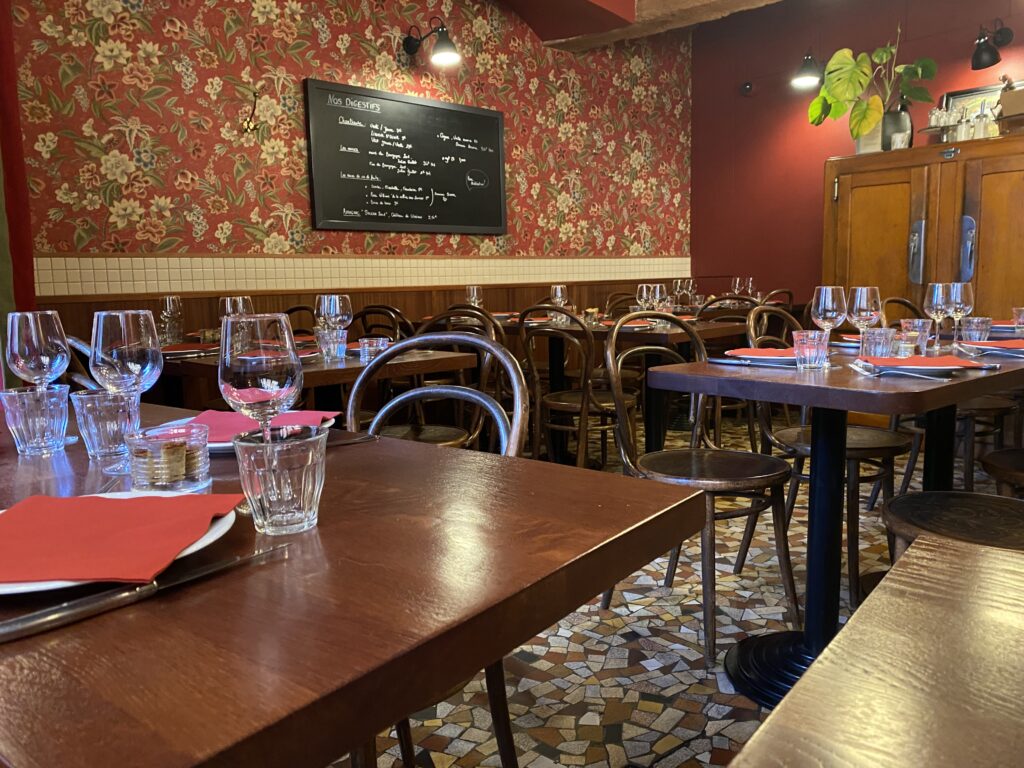 If classic isn’t so much your style, you can get an update on the traditional Bouchon at Le Bouchon des Filles. This women-run restaurant is a local favorite, serving healthier, modern takes on classic Bouchon fare, like a quenelle (an enormous fish dumpling) and cervelle de canut (herbed fromage blanc). Their dinner menu is only €28, and comes with several small “salads,” an entrée, a main dish, a cheese course, and dessert. It ends up being quite a lot of food, but you won’t want to waste a bite.

Why Lunch is the Best Meal of the Day

If you really want to eat well while saving money, consider shifting your big meal of the day from dinner to lunch. Many of Lyon’s pricier eateries offer a very reasonable lunch menu, with three courses for €25 or so. Just be aware that most restaurants have very limited hours, so lunch only runs between noon and 2pm, and a reservation is still highly recommended. 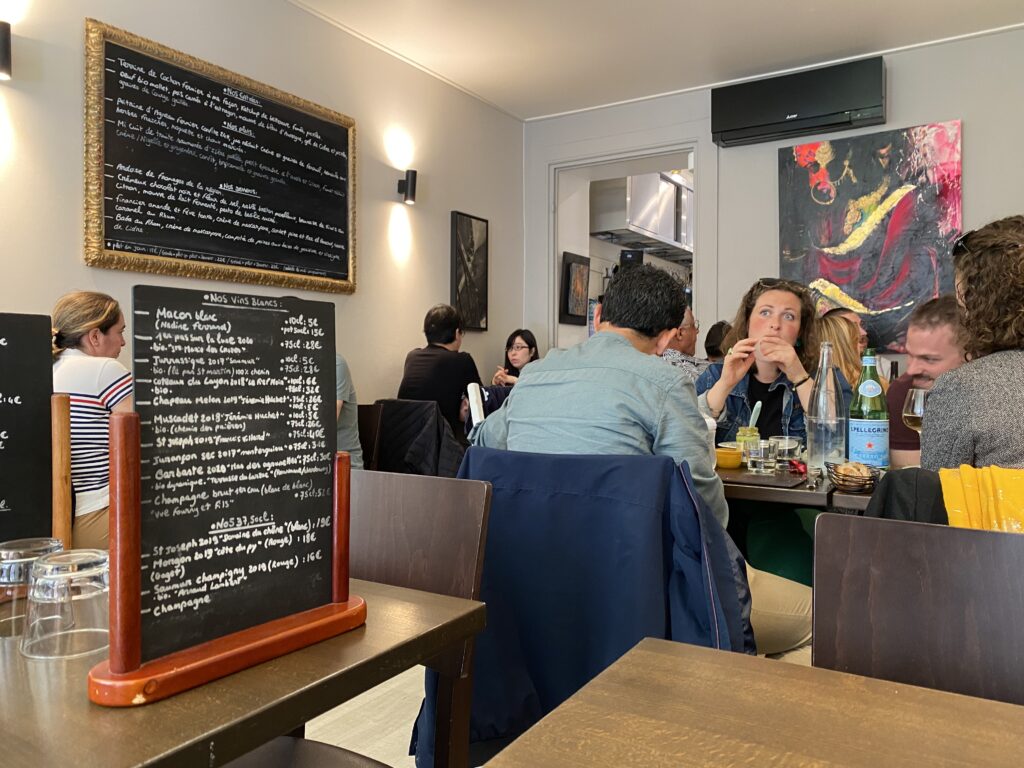 If you want a meal worth savoring the entire rest of the day, or even week, get a table at Le Poivron Bleu. This white-walled minimalist resto is based on a philosophy of local, ethically-sourced ingredients, handled with care and presented in style. Their menu is kept as simple and fresh as possible, so only two appetizers and two main dishes are offered per day. Have your three course lunch meal for €25or go all out on dinner for €34. 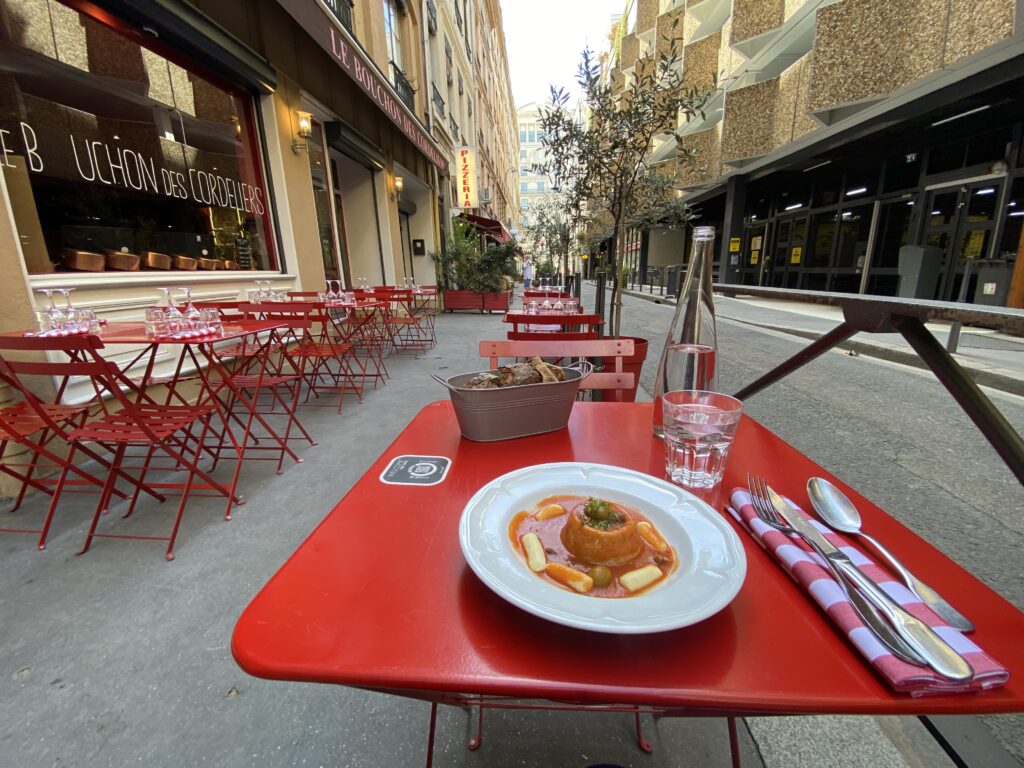 Another old school Bouchon, Le Bouchon des Cordeliers is a multi-storied, red checked tablecloth kind of establishment perfectly riding the fine line between kitsch and fine dining. They offer a three course lunch menu from Tuesday through Friday at €28 called their “Menu des Canuts,” named for the silk workers who used to fuel Lyon’s biggest industry. But you can still go à la carte for dinner if you desire, with main dishes averaging out at €18 apiece.

Sometimes, you don’t need the ceremony of a sitdown restaurant to make a meal worth your while. The food speaks for itself at the Food Traboule in Vieux Lyon, a Food Court for foodies. The name references the secret passageways, or traboules, found in Lyon’s oldest quarter. Spread over three levels and seven spaces, the Food Traboule allows everyone to order the restaurant quality meal of their choice, from whichever chef piques their interest that day. Most dishes run between €13-15, and they offer a “Happy Midi” lunch menu Monday through Friday with €10 mealsor €13 if you want lunch and dessert.

This famous covered market feeds all of Lyon, and is the first stop for every chef in town each morning. Whether it’s fish, cheese, meat, produce, or specialty products, you can find everything on your shopping list at Les Halles de Lyon Paul Bocuse. But it’s not just a place to go to pick up groceries as there are several restaurants in the market, too, most of which are only open until 2pm, making Les Halles an excellent stop for a gourmet lunch without all the pomp and circumstance. Resto Hallefor example, has an €11.50 daily dish, or a three course lunch for €18. 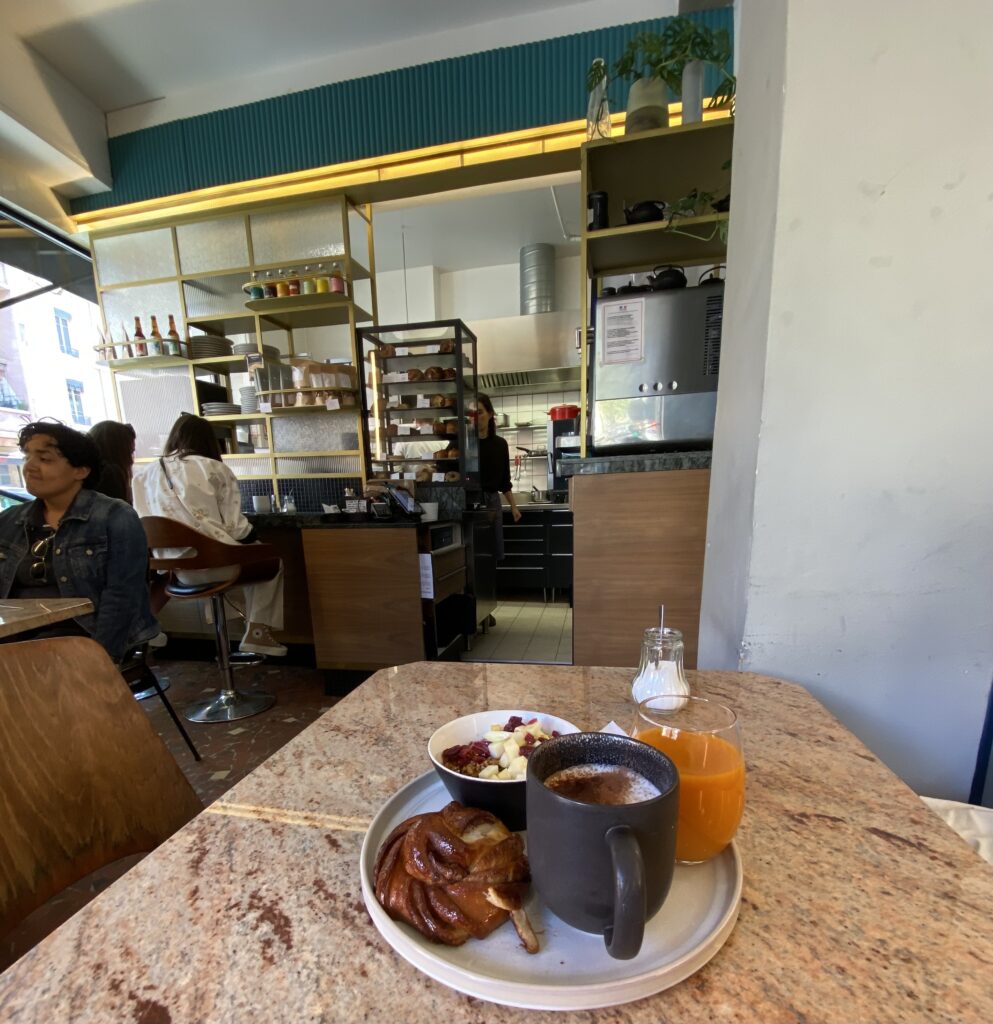 Le Kitchen is ideally located between two of Lyon’s major universities, so it’s a popular spot for students at any time of the day. Though it looks like a brunch bar, the restaurant doesn’t actually serve brunch, but they do a fantastic breakfast until 11am. Get a coffee and pastry for €4 and enjoy the trendy blue and gold decor, or splurge on “La Totale,” which comes with a hot beverage of your choice, a pastry of your choice, a juice of your choice (including apricot and apple-quince), and a yogurt-muesli bowl with fruit, all for €14. Definitely the best place to start your morning. Their lunch is excellent but pricier, €35 for a three course meal. If you slept late and missed breakfast, though, you can always come back before 6:30pm for their “dessert bar,” which includes an excellent assortment of pastries.

Catherine Rickman is a writer and professional francophile who has lived in Paris, New York, and Berlin. She is currently road tripping around France, and you can follow her adventures on Instagram @catrickman.