WHEN you move into a new home, you’re likely to be focused on setting up your new space, not cleaning what was left behind.

But there are areas of the house the prior owner might not have tackled, and places you should clean right when you move in, one real estate expert revealed.

Stephanie Booth is a real estate agent based in Georgia, and when she’s not selling homes, she’s cleaning them – and posting her favorite hacks to TikTok.

Speaking exclusively to The Sun, Booth detailed her journey to success on the app, and the common cleaning mistakes she sees homeowners make when they buy or sell a home.

“Cleaning and organizing has always been in my DNA,” Booth explained.

From an early age, cleaning interested her, and Booth spent much of her childhood fascinated by pros like Martha Stewart. 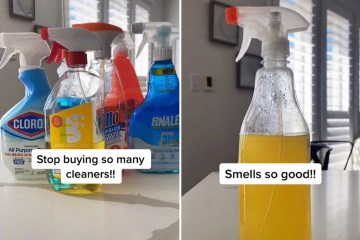 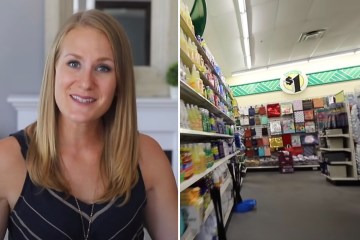 “I would watch HGTV over cartoons,” she said. Over time, she continued to hone her skills, and upon becoming a licensed real estate agent, she had a revelation.

“What I knew was not normal,” Booth admitted. “There were people who just weren’t aware of the things that I knew.”

Booth began sharing her knowledge online, and her daughters encouraged her to keep going.

Now Booth has over 263k followers on TikTok, where she busts cleaning myths and highlights her most effective hacks.

She told The Sun that there are certain areas you should deep-clean when you’re selling or buying a home, and also gave homeowners permission to skip the things that buyers never notice.

Booth titled the area that often sports the most dirt and grime when sellers move out the “splatter zone.”

“It’s the top of your stove, and your kitchen cabinets,” Booth said.

“I see the buildup that’s really stuck on top of stoves, and it doesn’t need to get to that point,” she explained. “They neglect them and get frustrated, and then every single time they cook, they’re baking the mess onto the surface.”

Kitchen cabinets suffer the same challenges, because food gets splattered when cooking, and never wiped down properly.

As a result, homeowners often end up damaging their kitchen appliances or stripping the finish of their cabinets with harsh cleaning products.

“I can see where people tried cleaning cabinets and removed the finish, or you can tell the texture of the paint has changed,” Booth said.

Booth recommended making a formula from Dawn dish soap and baking soda, then letting it sit on the stovetop for a while before scrubbing.

She uses a microfiber cloth and the “hottest possible water” to pull the grease up.

If there’s still caked-on grime, don’t turn to harsh chemicals that could damage your stove or range.

“Barkeeper’s Friend is the strongest thing I would use on a stovetop,” she added. “You do not need to spray Easy Off on the stove.”

For cabinets, she likes using Mrs. Murphys Oil Soap – making sure to dilute the concentrate as directed on the package.

“I rinse, which people forget to do,” Booth added. “They think that leaving a cleaning solution on the surface is ok but it leaves a residue.”

TACKLE THESE FIRST WHEN YOU MOVE IN

If she were moving into a new home, the first thing Booth would do is call in professional carpet cleaners.

“There’s a lot of DIY carpet people, and they’ll say that its ‘professionally cleaned’ because they used a machine they bought or rented from the store,” Booth said.

But to lift deep-seated stains, animal dander, and bacteria, you need to hire a team of professionals.

“Then I would work on filters, like the one in your dishwasher,” she continued.

Open up the dishwasher, and do a thorough inspection of the filters to see if they’re clogged.

Stay in the kitchen to check the nooks and crannies underneath and behind appliances.

“If the sellers left their refrigerator, check the vents on the back, and the bottom drawer of the stove, too,” Booth listed.

“People always forget because they’re cleaning at eye level and they don’t get behind appliances,” she explained.

But dirt and dust will build up on and around your kitchen appliances, and that’s not the least of your worries in a new home.

“There’s food that winds up behind refrigerators and stoves, too,” she said.

HIRE PROS FOR THIS BATHROOM HAZARD

Along with carpet cleaning, there’s another task that Booth said is better left to the experts.

“You don’t see this too often, but some bathrooms don’t have fans in them,” Booth explained. “That pulls the moisture out of them.”

That leads to mold growth, a problem that’s as smelly and unsightly as it is dangerous.

“If mold has grown on the ceilings and walls, I’d have a professional come in,” Booth suggested. “Once you start kicking those spores up, they can get into your lungs and create a host of allergies and long-term issues.”

You’ll also want to make sure that you test what kind of mold you’re dealing with.

SWAP THIS ITEM FOR YOUR AIR FRESHENERS

Sellers have one bad habit that can hurt their chances of a successful sale: over-fragrancing their homes.

“In real estate sales, a strong potpourri of scents doesn’t equal clean, fresh or welcoming. It comes across like the sellers are trying to mask something,” she explained.

Strong smells can be a dealbreaker for many buyers, and Booth has even had clients leave a showing because the air fresheners caused migraines. Some buyers won’t even make it through the door.

“I have a client who stands in the doorway and sniffs the interior before she’ll enter. If it had a strange smell to her, we didn’t look at the house,” she shared.

You can also brew up Booth’s favorite potion that will make your home smell fresh and bright, not overbearing.

“I like making a crockpot potpourri of sliced ​​lemons, a dash of vanilla, a sprig of rosemary and two cups of water,” she said.

“It’s a light natural scent that a homeowner can safely let simmer in their crockpot throughout the day.”

Some sellers tend to fixate on one thing, and insist on making sure their homes are just right before realtors arrive for a showing.

But more often than not, they focus on the wrong issues, Booth said.

“Clients want to fluff and karate chop their pillows, but as long as there isn’t stuff spewed all over them, the buyer won’t notice,” Booth said.

“I had a client who wanted an hour’s notice before anyone could come see her house because she needed to get her rugs situated and her pillows fluffed,” Booth remembered. “Her house looked great, but that’s not what buyers focus on.”

What buyers do notice is the dirt and dust homeowners often overlook – for example, dusty return vents on the ceiling.

“They’re immediately thinking, ‘do they get their HVAC serviced? Do they change their air filters?'” Booth said.

Or, they notice signs of pets, which Booth said can be a big sticking point even if the house is clean and well-maintained.

“Some people are very weird about pets, so make sure that it’s hidden and not in their face,” Booth said.

If you take your dogs with you while an agent is showing your house, take their bedding and bowls with you, too.

Do you have a story for The US Sun team?