WHILE the air fryer is the appliance of the moment, there’s another that can be used to make cheap meals without upping your energy bill.

Mum Lorri is a huge fan of a slow cooker, and regularly takes to her TikTok page to share the easy recipes she makes for her family.

From mac and cheese to sticky chocolate pudding – there are few things that Lorri can’t make in the slow cooker, and that’s why she’s already got over 21,000 followers on TikTok.

In her recent video sharing her mac and cheese recipe, Lorri explained that she was using Fusilli pasta as she didn’t have any macaroni.

Once she’d added three quarters of a pack of the cake to her slow cooker, she threw in 250g of grated mature cheddar.

To that, she added 20 grams of grated parmesan, half a tub of original Philadelphia cream cheese and 50 grams of butter. 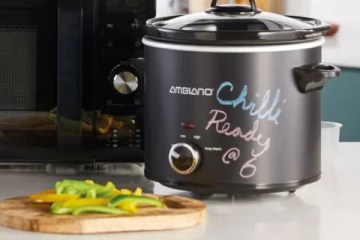 For the liquid, Lorri uses 650ml of milk, before adding some garlic paste, oregano and salt and pepper.

Once all the ingredients are in the slow cooker, mix it all together and then “trust the process”, before putting it on high for an hour.

“After an hour, give it a good stir and make sure all the pasta is under the watery sauce,” Lorri explained.

Then put the lid back on and leave it for another half an hour on low.

“Unreal you guys, and so easy,” she said.

“Another one pot wonder comfort dinner to help us through these cold nights,” Lorri added in the caption for her video.

If you’re more of a sweet fan, you can use your slow cooker to make puddings – like Lorri’s sticky chocolate pudding.

Melt 75 grams of unsalted butter in your microwave, and add to that 250ml of any milk, as well as two teaspoons of vanilla extract.

“Give that a good mix together and then throw that in with all of your dry ingredients and give it a good stir,” Lorri instructed.

Then add 250ml of boiling water and give it a “really, really good mix”.

“Pour it right on top of the mixture in your slow cooker and do NOT mix it,” Lorri continued.

Put the lid on and cook on high for two hours.

“You can see the chocolate sauce melting through,” Lorri gushed as she took a spoonful of the pudding out of the slow cooker.

“It’s basically like a sticky toffee pudding but chocolate flavoured. I had mine with ice cream and it’s so delicious.”

“This is the best thing I’ve seen cooked in a slow cooker,” one person commented on the video.

As another wrote: “Totally needs to be served with lashings of custard!!

“Just ran to my ‘baking’ cupboard and had all the ingredients to do this!!” someone else raved.

“Looking forward to it in 2 hours’ time!”