WE hope you can stomach more Jamie Oliver because Channel 4 are about to plate up two servings of the celebrity chef.

It comes after he ended his exclusive contract with the broadcaster earlier this year following a 20-year association.

That inevitably led to speculation the cooking whizz might get snapped up by a streamer such as Netflix and Amazon.

A source said: “Getting a two-show deal no doubt helped him to stay a little longer — and Channel 4 commissioning two of his productions is a show of support.

“A double dose of Jamie will be welcome news to his many fans too, particularly as his new shows are designed to make our lives easier.”

The first series, Jamie’s One-Pan Wonders, is set to air this year and is hailed as the “ultimate solutions-based guide” to easy meals using just, you guessed it, one pan. 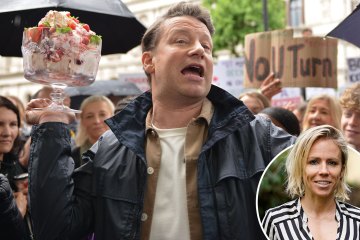 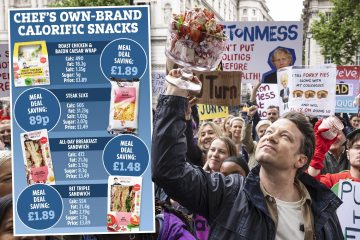 Across eight episodes, the telly chef will demo his best brunches, lunches, dinners and desserts and guarantees you really will only have one dish to wash up.

Jamie’s Seasons will air next year and is an extended four-part series showcasing British produce from spring to winter.

Although Jamie’s first TV show, which carried his nickname The Naked Chef, was on the BBC, he quickly jumped to Channel 4.

During his two decades with Channel 4 he delivered various shows, including his campaigning series, Jamie’s School Dinners, which tried to change government policy on what pupils are served.

Travelogues and Christmas shows followed, as well as specials where Jamie looked at everything from gardening to pig farming.

Yet despite now being able to take his shows wherever he likes, it seems he’s sticking with Channel 4 like burnt egg on a hob.

YOU can’t miss Thea Thompson as she sashays on to telly screens on MTV’s Are You The One? next week.

Her work as a ring girl for boxers such as Tommy Fury means she has previously dated famous men – most of whom have a “blue tick” on Instagram to verify them as authentic after appearing on other reality TV shows.

So it sounds like even fame won’t impress her.

Thea, from Kent, said: “Oh, I call that the blue tick d*ck. You’ve got to stay away from those!

“I’ve learned from my mistakes.

“I feel like certain people use their position in the media to get with a lot of girls.

“I’m not tarring everyone with that brush, but there is a certain Picasso going on there, painting everyone, and I don’t want to be painted. I’m abstract. Keep me away. I’m a canvas. I’m good.”

Are You The One? lands next Monday, just after the latest series of Love Island draws to a close.

Thea added: “I feel like Are You The One? is completely different. It had twists and turns like I’ve never seen before.

“As soon as you were comfortable, the rug was taken from under your feet. You never knew what was coming.”

The show will air every Monday at 10pm on MTV from August 8, but be available in full on Paramount+ to binge watch from the off.

Run’s so glum for Romesh

HE’S famous for turning on his “stage grumpiness” but it turns out Romesh Ranganathan is a bit too convincing when he’s doing the school run.

The comedian and dad-of-three was boycotted by fellow parents who see him waiting to pick up his kids.

He told the Parenting Hell podcast: “One of the things that was a horrible shock was these tickets went on sale for the local theater The Hawth (in Crawley, West Sussex).

“They posted it on their Facebook group. This woman put up: ‘I will never buy tickets to see this man, he’s so bloody miserable on the school run’.

“And then a couple of other people answered going, ‘Yeah, what is up with him?’.”

Romesh turned to his wife for an objective opinion.

“I said to Leesa, ‘Am I miserable on the school run?’ and she goes, ‘Yeah, but no more miserable than when you leave the house and you return afterwards’.”

JACK O’CONNELL has come a long way since his days in Channel 4’s Skins.

He has now signed up to star alongside Patrick Dempsey, Adam Driver and Penelope Cruz in an Apple TV+ movie about sports car entrepreneur Enzo Ferrari.

The movie, called Ferrari and directed by Michael Mann, is set in the summer of 1957 and sees bankruptcy threatening the car company.

Ferrari decides to counter his losses by rolling the dice on one race – the iconic Mille Miglia which takes place across 1,000 miles in Italy.

Terrier is no paw relation

THE next time you consider gloating about how many Instagram followers you have, consider celebrity canine Ted the Dog.

The Patterdale terrier has just under 100,000 followers, thanks to his hilarious line-up of pictures featuring him with his humans.

Showing him sunning himself, wearing outfits and wigs made of seaweed, the images rival those of any snap-happy Love Islander.

Except Ted will probably have a much longer TV career.