As the cost of living crisis deepens, we caught up with celebrity chef (and lover of family-friendly home cooking) Lisa Faulkner to talk fuss-free recipes and the tastiest ways to create simple, cost-effective meals.

This autumn, Lisa Faulkner has partnered up with online supermarket Ocado, who are on a mission to show that cooking cost-effectively for the family is easy, delicious and energy-efficient, to create a whole week’s worth of family dinners for just £25 .

Is home cooking a big part of your daily diet at home with the family?

I don’t know anything thigh home cooking. I’m very lucky in that I grew up with my mum and both grandmothers cooking. They were all brilliant cooks and always cooked from scratch, so I feel like I grew up cooking that way too. And I still do; I mean, sometimes I use quick cheats and jars of sauce and things like that, but I cook every single day.

Depending on who’s working, either my husband John (Torode, celebrity chef and presenter of Masterchef) or I cook. We also cook together a lot; it’s something we both love, so it’s never a chore. 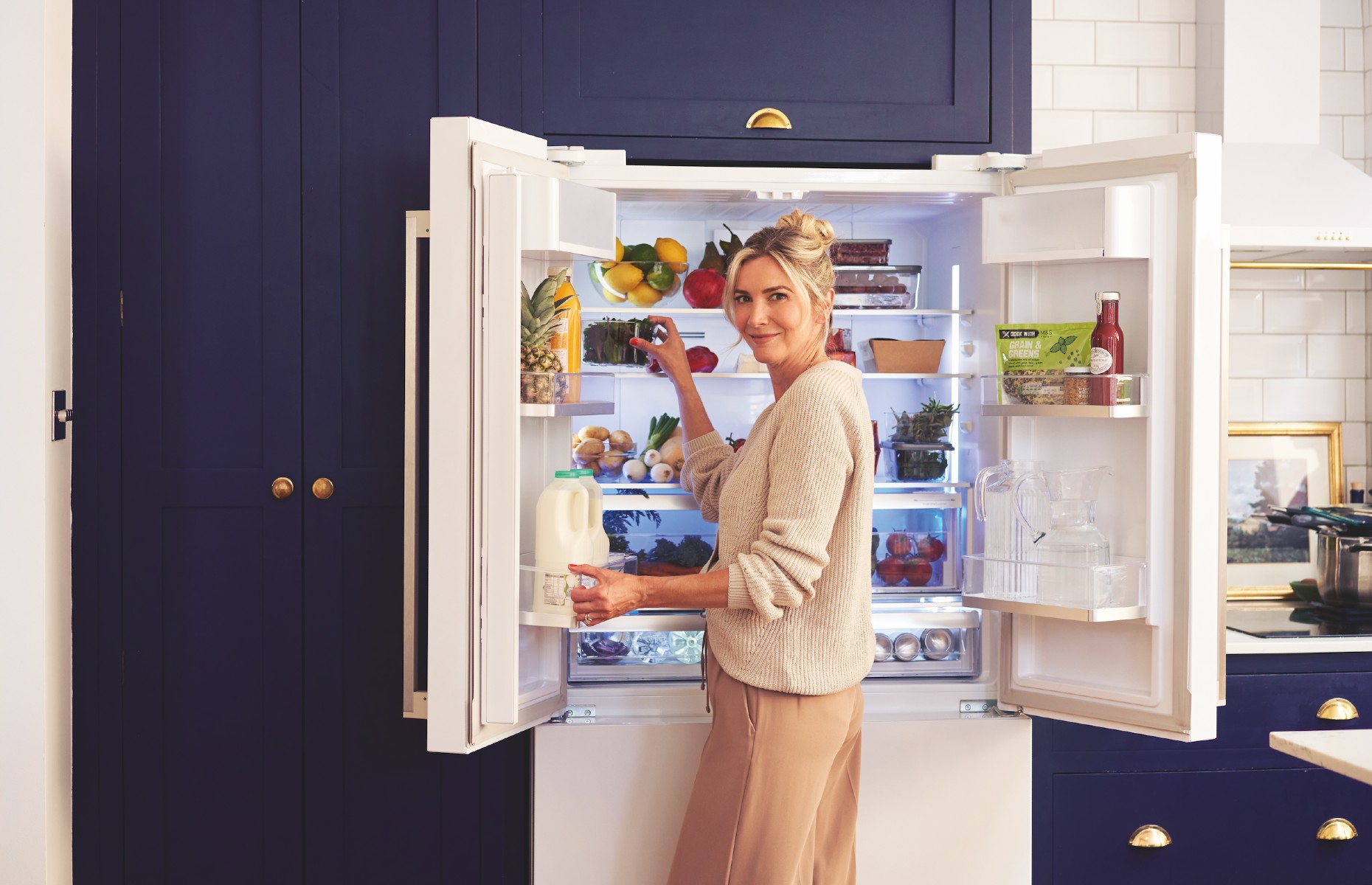 What was the inspiration behind the dishes you’ve created for Ocado?

That’s why, when I was planning these meals for Ocado, I wanted to think about ingredients that can be used in more than one recipe. When we’re cooking, a lot of us make the same mistake: we buy an ingredient, but only use it for one thing, and then it sits withering in the fridge until it’s useless. I just really don’t want to waste food; I’m always working out ways to use leftovers, or freeze food, or batch cook.

The five recipes I’ve created are a really nice way of maximizing ingredients. Instead of having sage in just one recipe, it’s used in a few of the dishes. Likewise, squash is in a couple of the recipes – kale too. But you’re mixing it up so that you’ve got some meat dishes, some veggie dishes, and a fish dish that’s so easy because it uses fish fingers. They’re really simple recipes that are nice to cook; they don’t take long, and you can cook them up knowing that you’re feeding your family some of their five a day. They’re obviously good value as well! 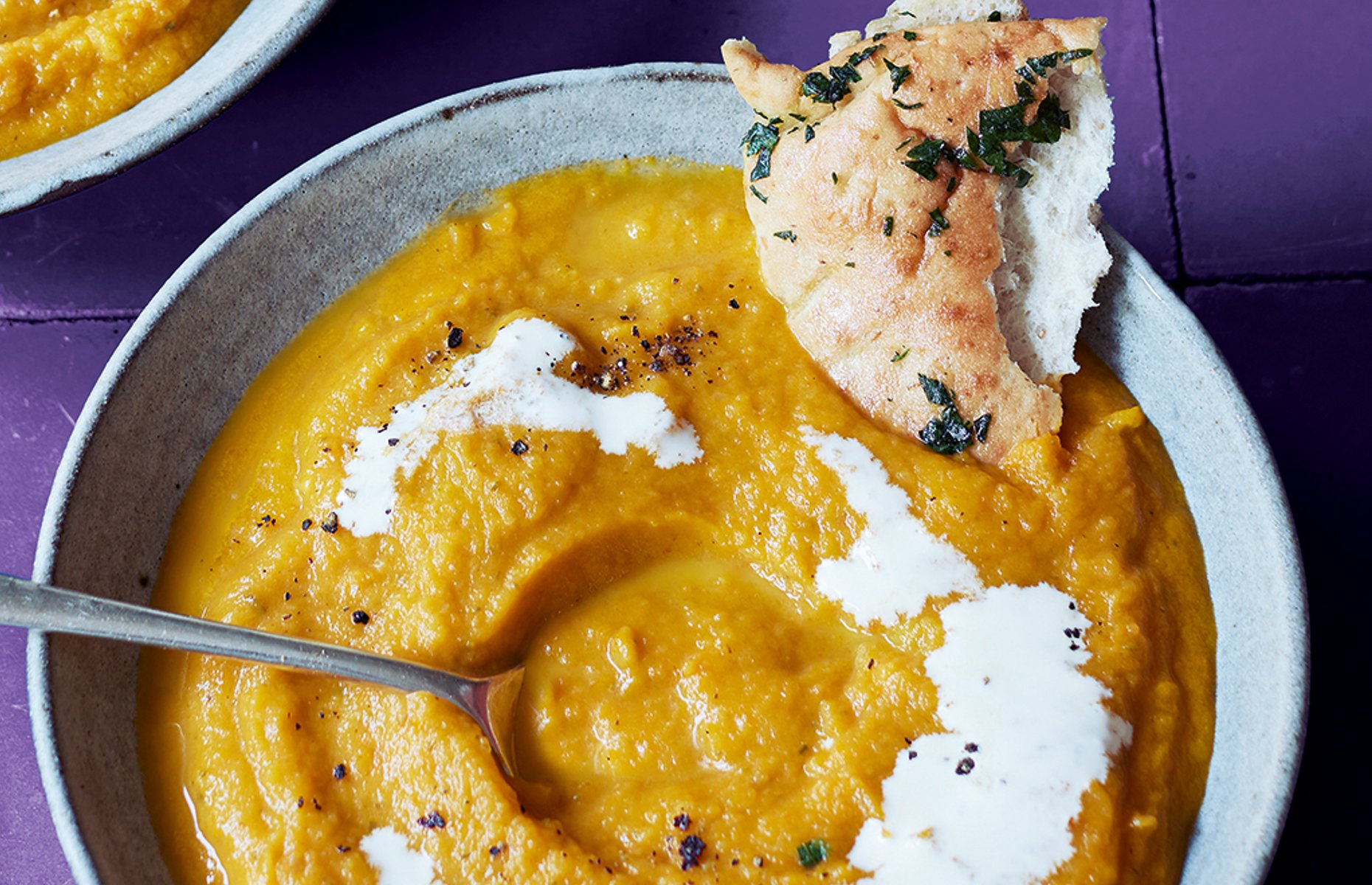 The recipes contain plenty of vegetables – but do they cater for fussy eaters?

I think so! The roasted carrot soup is really great – kids tend to like carrots, and the soup is really tasty. Plus, you’ve got the garlic pitta bread, which is fun to dip in. The whole dish is a really good way of getting the veggies in there.

The katsu always goes down well, too, and it’s great if kids are fussy. They might not like the sauce, or they might only want a bit of the sauce, but that’s possible to do because it’s essentially fish fingers, rice and broccoli. Anything covered in curry sauce and a breadcrumb is usually a winner! 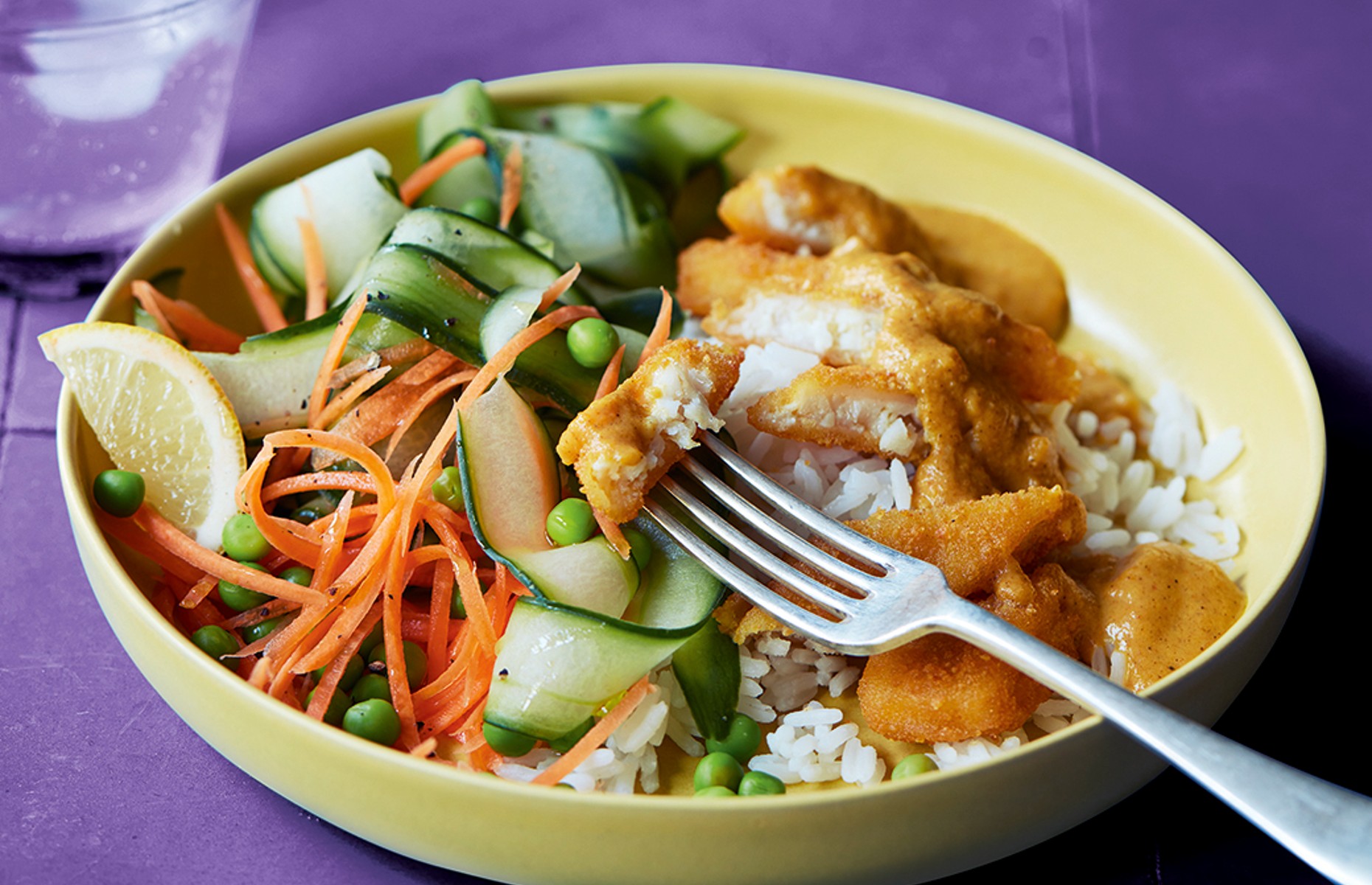 Are the recipes easy to make?

They all take about 20 to 30 minutes at the most to prepare. They’re easy recipes, and it’s really nice to get kids involved with making them too. Lots of kids love cooking, and the earlier they cook the earlier they understand food; they understand what’s good for them and what’s not so good for them, what they can have in moderation, and how much things actually cost. Also, if the kids help make the food, they always want to eat it because they’ve made it. 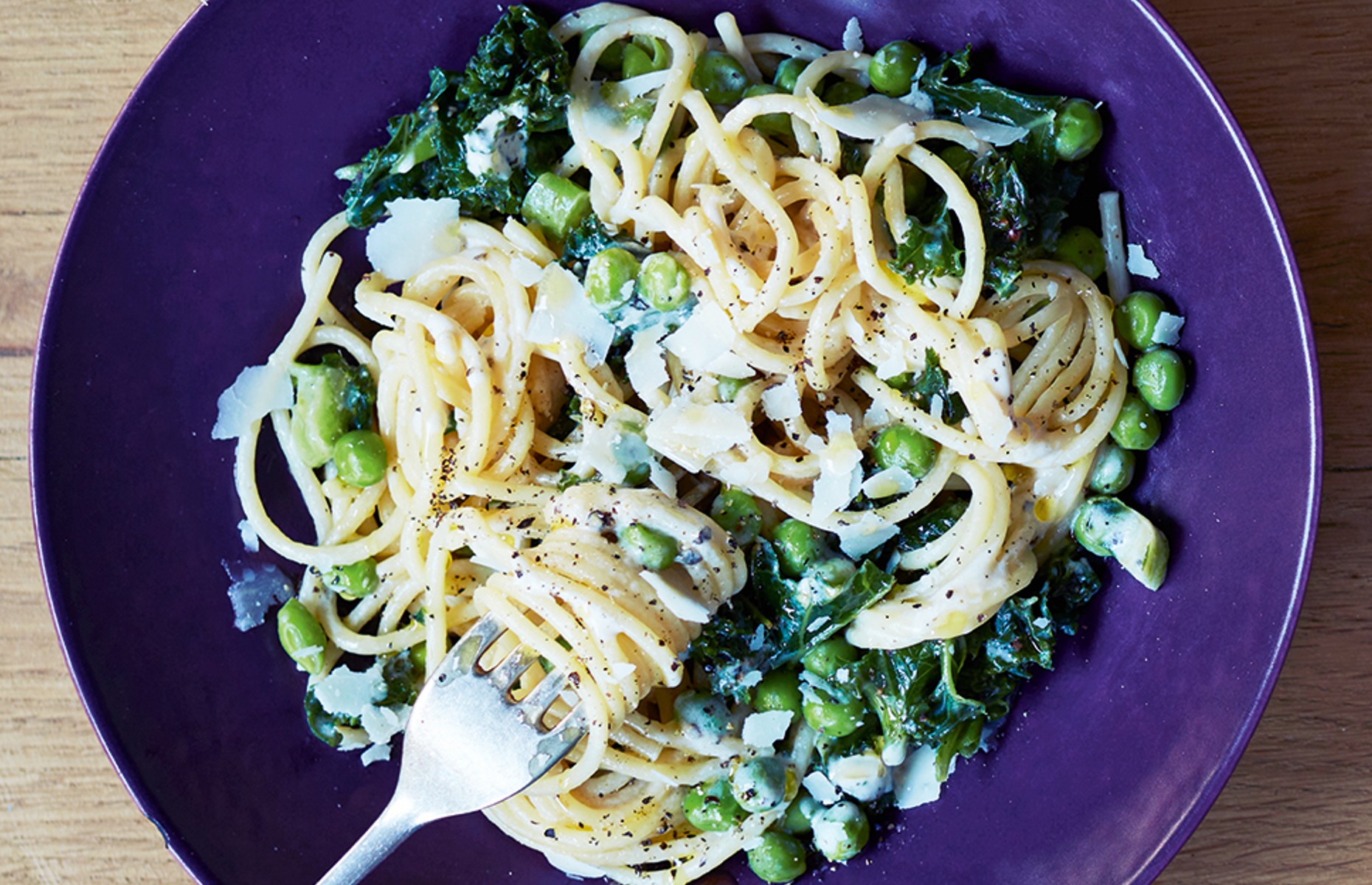 What are your hero store cupboard ingredients for families cooking on a budget?

Definitely pasta, rice, tinned tomatoes and onions. Squash is obviously very autumnal, but it’s a really versatile vegetable so it’s really useful – then there’s kale and cabbage, which are greens that you can put into lots of things, especially with kids. You can hide greens in things like mac ‘n’ greens dishes, or in the cacio e pepe recipe that I’ve created for Ocado.

Have you got any handy food tips for saving money that you can share with us?

Whenever I buy herbs, I use them in dishes and then put them in the freezer so I can use them again. Things like sage or thyme, I just dry out and put in jars.

Then, I make stocks out of loads of things – even old vegetables. We’ve all got those old vegetables in the bottom of the fridge drawer! I use them to make a soup, or a veggie stock for a soup if they’re really past it. You’ve just got to think, pour some water on that, stick it in the oven and you’ve got an amazing stock to make casseroles, or soups or stews.

Another way to save money is by trying to use your kitchen appliances less. With the five meals that I’ve done, you can cook your vegetables for the tray bake and then do the veg for the soup on the same day because it’s already cooked and you’re just going to blitz it. That way, you don’t have to use your oven every day. 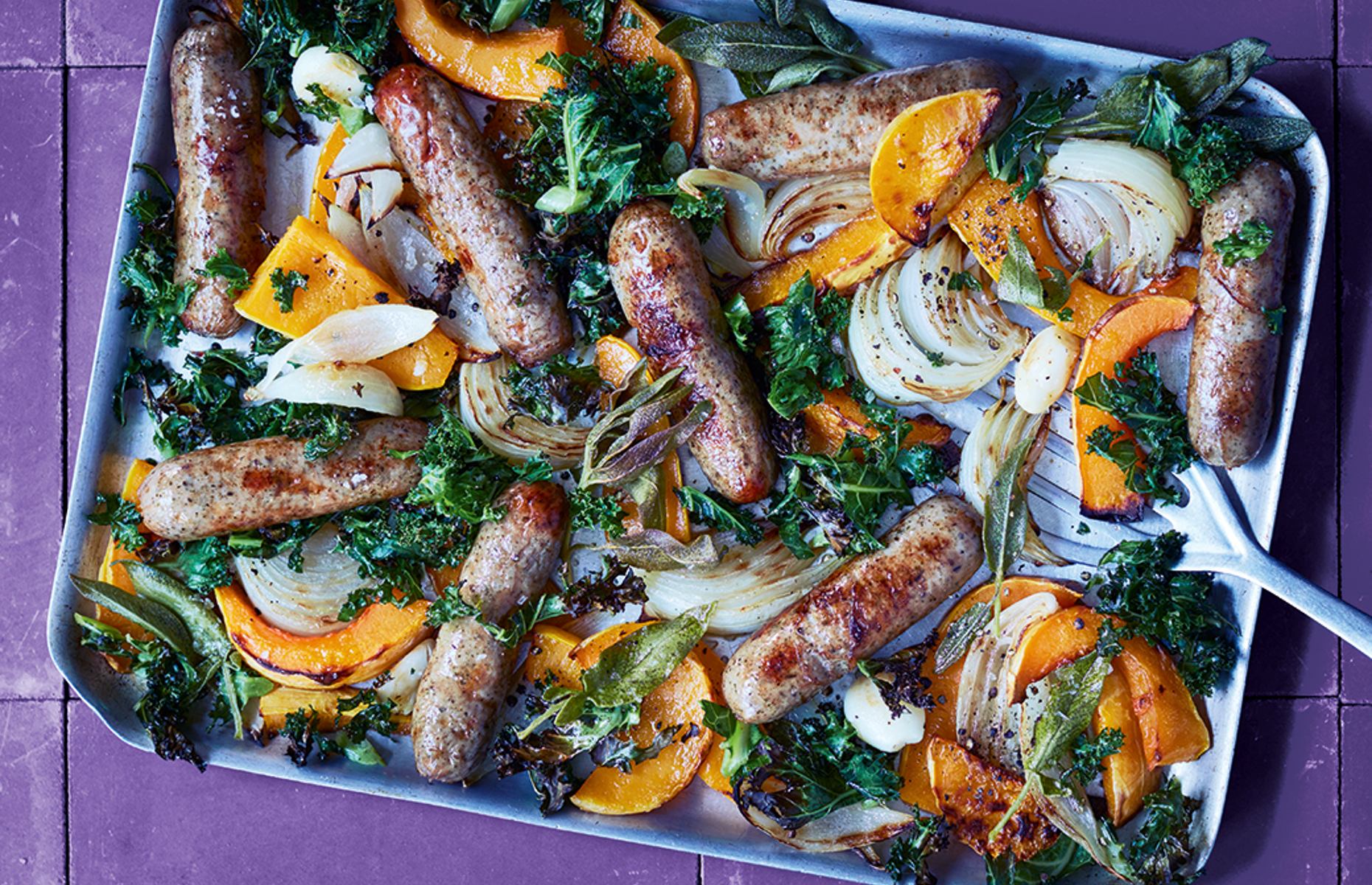 Do you tend to batch cook dishes and freeze meals for later?

Definitely. For example, my daughter Billie really loves my godmother’s casserole, which is sort of like a beef bourguignon. When I make it, I always prep everything early and put it all in the slow cooker in the morning. When it’s done there’s always enough to put into portions, which I then freeze. We can reheat it and eat it again, or I can make it into something else.

The other day, we made it into a tortilla soup by using an extra tin of tomatoes, a bit of pasta and some tortilla chips on top. I’m a big fan of using leftovers, not just as the dish they were to start with, but turning them into something new.

Do you have any advice for people who are new to cooking meals from scratch?

I think one of the best things that anyone can do when they’re new to cooking is to learn to cook a dish that they like to have when they go for dinner, or a dish from when they were a child.

Recipes can be intimidating. Even if it’s something like mac ‘n’ cheese, you might have thoughts like, “oh gosh, I’ve got to make a white sauce and a cheese sauce, and I don’t really know how long to cook the pasta, and I want to put some veggies in it and make it healthy”. It’s about breaking it down and following the recipe a few times. I think that once you’ve cooked something three times, then you know it. And once you know it, then you can adapt it and change it and make it something else.

It’s about not being scared. Start off easy by trying something like a tray bake, where you’re literally cutting things up and putting them into the oven. Then you can go, “I made that! That was really easy!”. And then it gives you confidence. Baby steps! 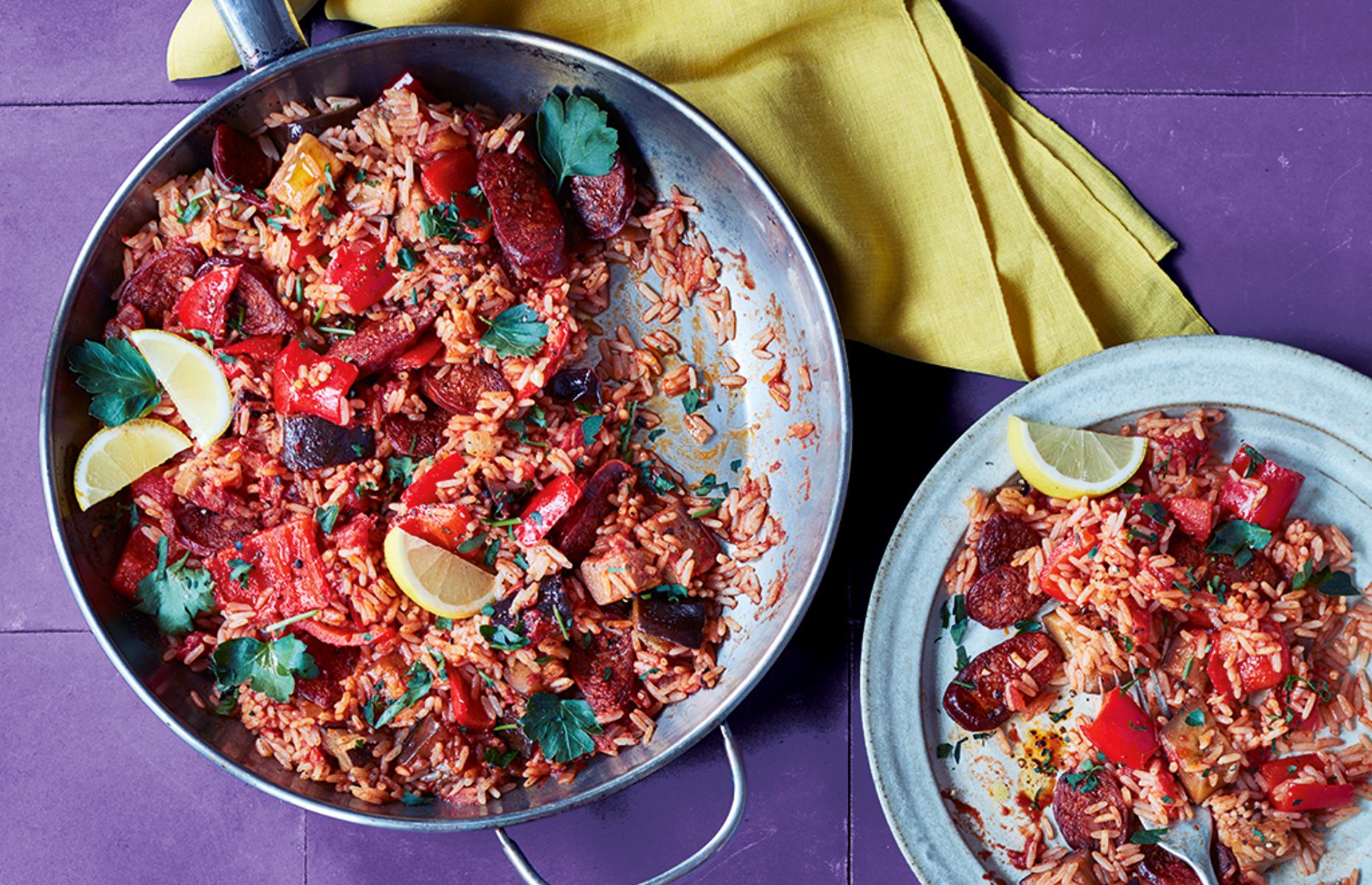 One final question – do the Ocado recipes you’ve created get the seal of approval from John?

Well, he’s eaten them and he likes them, so yes! You know what, he’s my biggest fan. He’s always so lovely about my food.