We’ve never seen as much cheese at the show as there was this year – an abundance of dairy (and a few non-dairy) delights from across the world. But in amongst the block cheeses were a few new innovations that seek to broaden cheese consumption occasions.

Folio’s Cheese Wraps are 100% all-natural, lightly baked sheets of cheese made from parmesan, cheddar or Jarlsberg, and can be used as a lower-carb version of a standard wrap.

Meanwhile, Ellsworth Co-operative Creameries from Wisconsin has created Cheddar Curd Crunchers – a snack product made from freeze-dried cheese curds that actually delivers more of a ‘squeak’ than a crunch, a bit like a popcorn.

And another Wisconsin business, The Big Moo, has created a baked cheese range designed to be grilled and eaten hot, with the most distinctive branding we have come across in this sector. 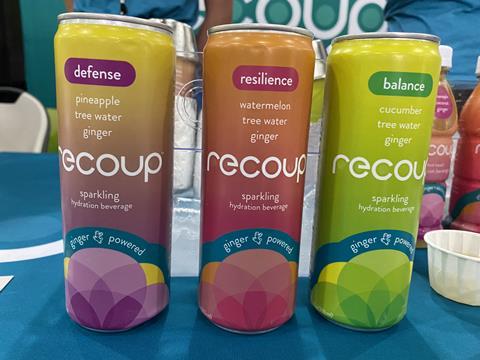 It appears the world is looking for soft drinks that don’t just refresh, but also revive.

And British brand Love Struck has developed frozen smoothie ingredients designed to create both delicious and nutritious drinks. Our favorite was Blueberry Thrill, which is packed with antioxidants to help heart health. 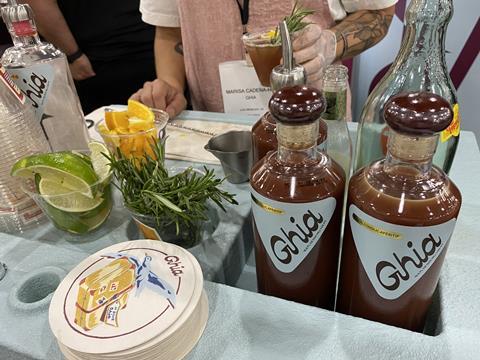 Another approach apparent across the show was the growing trend towards sophisticated adult soft drinks – both non-alcoholic spirits and sodas with more adult flavors.

Ghia, a “spirit-free snack adapted for modern times”, feels grown-up and has a slightly challenging dry, herbal flavor that we quickly grew to love.

Free Spirits from California has a range of non-alcoholic expressions of the world’s best-loved spirits, all attractively packaged in bottles that look and feel just like their alcoholic cousins. We really enjoyed the tequila version.

And Uncle Waithley makes a small-batch ginger beer tonic with a pinch of turmeric and a good hit of scotch bonnet pepper that produces a distinctly adult kick. 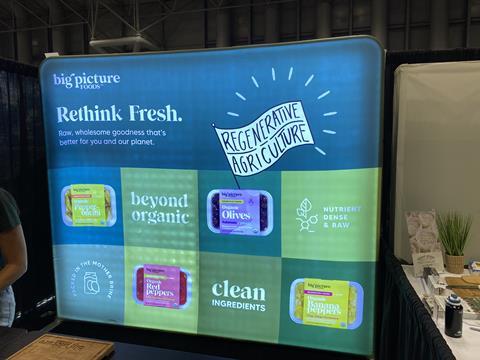 Sustainability is clearly moving up the corporate agenda, and we found more evidence this year of grocery businesses putting it at the heart of their company ethos.

Big Picture Foods has a range of foods that are naturally fermented, not pasteurised or processed, which contain no fillers or preservatives. They also seek to empower farmers and regenerate the ecosystems they harvest from.

And Caboo makes a range of sustainable paper products such as kitchen rolls “for wise folks” from bamboo, and plants a tree for every pound of paper it sells. 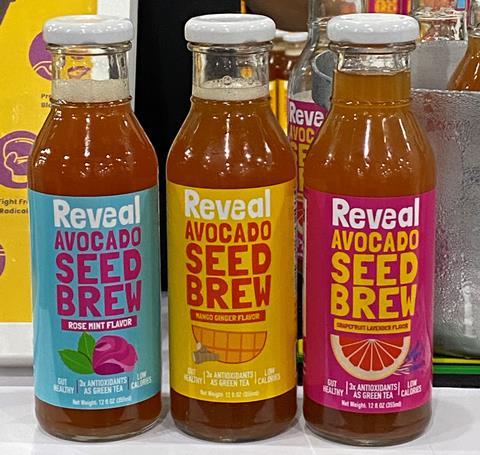 The sustainability drive saw a number of new products at the show using upcycled ingredients.

WaJu has created a series of “feel-good fizz” sodas made from an overlooked water source: fruit. Fruit is about 90% water, so there is a real social benefit in upcycling this water instead of tossing it back into the environment. And the drink tastes good too, gently echoing its fruit source.

Hidden Gems is a beverage company that aims to create a more sustainable food system by using the parts of food we commonly throw away. It has developed Reveal, a range of Avocado Seed Brew soft drinks that use the discarded parts of avocados as a core ingredient. 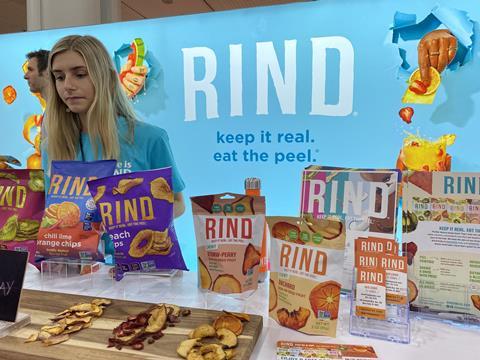 Fruit peel emerged as an unlikely ingredient for new products. We saw a number of exhibitors turning what is often thrown away into a tasty snack.

Rind from Michigan has a range of dried fruit snacks that make a real virtue of “keeping the peel”. It describes peel as “nature’s original packaging”, noting that more vitamins, fiber and antioxidants are evident in the rind than any other part of the fruit.

Pure Bites’ Fruit-A-Peel range takes a similar approach with its ‘all natural’ range of tangy, sweet and sour peel-based snacks.

Then there’s Japanese business Kankitso Labo, which has developed a range of candied citrus rinds that are sweetened and dried. These can be used as an ingredient, topping or garnish. 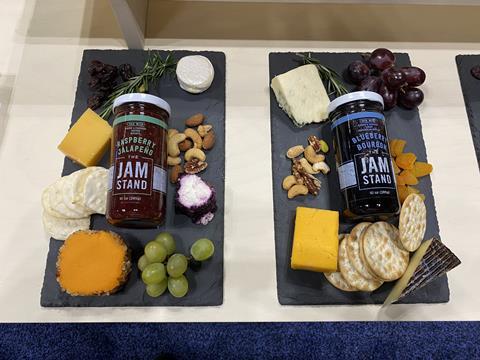 We came across several products seeking to fuse spicy and fruity flavors to create a harmonious balance.

The Jam Stand is from Brooklyn, a regular hotbed for new food initiatives. Along with its mission of sustainability, the brand has created a range of jams with savory ingredients. Most notable is its Raspberry Jalapeño product, which packs a real spicy hit.

Tannenbaum’s Botanical Hot Sauce starts from the opposite perspective – a hot sauce range that is balanced with the addition of fruit notes. They still have a proper kick, but the sweet preserve flavors are also evident and differentiate them from the abundance of other hot sauces we tried at the show. They are also fantastic paired with cheese.

Lamula from Mexico had a range of marmalades that were spiced with ingredients such as jalapeño peppers, and Hillers from Massachusetts was showing its range of Banana Pepper sauces. 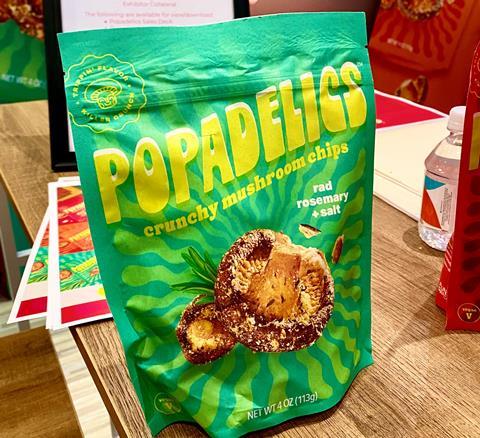 Every year, it seems a new vegetable pops up as the base for savory snacks. We’ve seen lentils, kale and peas emerge at previous shows, and this year it’s mushrooms.

There were several examples of mushroom jerky, but it was the mushroom crisps that really caught our eye. Popadelics from Fun Gal Snacks had a range of funkily packaged popped Mushroom Chips that are vegan and aim to create a snacking “experience”.

Mush Garden has a range of shiitake mushroom snacks that are similarly crunchy, including a wasabi variant that has a real kick to it. 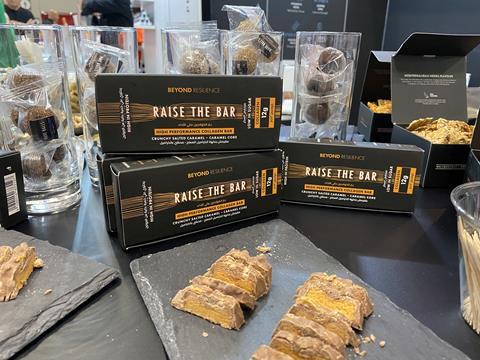 Proactive health has been a growing trend for the past decade or more, but we noticed some newer approaches and the emergence of collagen as a key ingredient this year.

QualiNova from Brazil has developed a range of collagen shot drinks under the Collageno brand that are designed to assist muscle, skin and bone health to fight the effects of aging.

Raise the Bar from Australia is using collagen as an active ingredient within its nutrition snack bars. Its ‘Glow’ bar also contains rosehip and added vitamins to help its consumer to ‘glow’!

Taking a different tack, Mighty Gum from Seattle has added immunity-boosting ingredients to chewing gum, enabling the simple act of chewing to have a beneficial effect on its user. 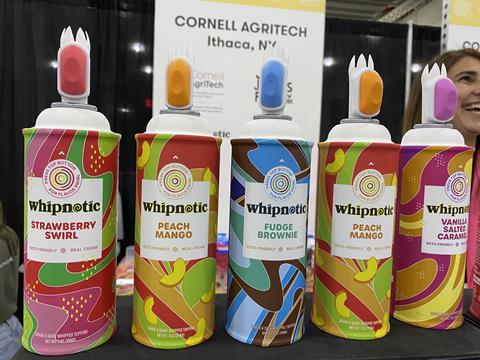 Our final trend this year is in recognition of the challenge that faces many of the show’s exhibitors, and most brands on supermarket shelves: how do you stand out amongst a sea of ​​competitors?

The answer for several was to make their packaging design instantly interesting.

By way of contrast, Good Hair Day Pasta uses clever cut-out windows and a beautifully understated design approach that elevates its brand presentation above other dried cakes. In the equally crowded olive oil category, Bio Orto has a similarly understated elegance that is beautiful and eye-catching.

And some extra stand-outs…

As ever, there were also some other individual innovations we found noteworthy.

Finally, Milton’s Cauliflower Crust pizza has used cauliflower instead of flour for its pizza base. In doing so, it has created a light, crispy pizza that tastes delicious – and it’s gluten-free too.