Full video from the Moab City Police Department in Utah shows officers investigating an incident between Gabby Petito and her boyfriend, Brian Laundrie.

MOAB, Utah – It’s been nearly one year since Moab City officers encountered Gabby Petito and Brian Laundrie to investigate a domestic violence call. Now, the 22-year-old’s family will file a lawsuit against the police department, saying law enforcement was not properly trained and did not follow the law, ultimately leading to the woman’s death.

In a press conference from Salt Lake City, the Petito family’s attorneys formally announced the wrongful-death lawsuit. Her parents – Joseph and Tara Petito and Nichole and Jim Schmidt – are seeking $ 50 million in damages.

“While the full evidence has not been made public, when it is released, it will clearly show that if officers had been properly trained and followed the law, Gabby would still be alive today,” said James McConkie, one of the attorneys. “Failure to follow the law can have deadly consequences, as it did in this case.”

McConkie went on to say that the Moab City Police Department has a “high turnover, lack of leadership and dangerous mismanagement for years.” The lawsuits names the responding officers, Eric Pratt and Daniel Robbins, along with Chief Bret Edge – who has since been released from his position – and Assistant Chief Braydon Palmer as defendants.

Roughly two weeks after the Moab incident, Gabby was last seen alive. Brian drove the camper van they were using for their cross-country trek to his parents’ house in North Port, Florida. Gabby wasn’t with him. A countrywide search began for Gabby while the Laundries refused to cooperate with the investigation.

What happened between Gabby and Brian in Utah?

New video was released in the Utah incident involving Gabby Petito and Brian Laundrie, which adds more context to an investigation into Petito’s death.

Body camera footage from both Moah City officers was released in September 2021. The world witnessed an emotional Gabby sitting in the back of a patrol vehicle on the side of a Utah road while Brian remained outside their camper van as law enforcement officials sorted out what transpired after a witness called police reporting a possible domestic violence situation between the two.

The domestic violence report included that Brian slapped and hit Gabby, but both of them denied that version of events to responding officers. Police ultimately split them up for the night and let them go.

The initial call came in after a witness spotted the couple arguing in downtown Moab. The caller told the dispatcher that “the gentleman was slapping the girl” and hitting her.”

“He was slapping her?” the dispatcher asked.

“Yes,” the caller answered. “And then we stopped. They ran up and down the sidewalk. He proceeded to hit her, hopped in the car, and they drove off.”

The 911 caller who reported a ‘domestic dispute’ between Brian Laundrie and Gabby Petito in Moab, Utah, on Aug. 12 was heard telling a dispatcher that ‘the gentleman was slapping the girl’ and hitting her, Fox News has confirmed Monday after exclusively obtaining the audio of the call.

The call appears to contradict a police report in which an officer states “no one reported that the male struck the female.”

The bodycam video of police responding to the domestic incident shows officers debating how to proceed before ultimately deciding that Gabby, who they were told was the aggressor by herself, Brian, and a witness, was having a mental health “break” and was not a domestic violence suspect.

Gabby did not dispute Laundrie’s story that she was the aggressor, and contradictory witness statements do not appear to have been discussed by officers at the scene. Police closed out the call without filing any charges or issuing citations, but ordered Brian and Gabby to spend the night apart.

The report faulted the department for never obtaining a statement from the 911 caller who initially reported seeing the alleged assault.

“I am confident and comfortable in stating the mistakes that were made were not made intentionally,” Price Police Capt. Brandon Ratcliffe wrote. “I would suggest building a stronger relationship with your local prosecutors to where if there are legal questions that officers are unable to answer, that they are able to and feel comfortable with, reaching out for additional guidance.”

He called for a review of the department’s report approval processes. And he said the department should implement a policy requiring photographs to be taken of all injuries, regardless if the subject is a suspect or victim.

What is the Petito family claiming in their argument?

In the lawsuits against Moab police, attorneys shared images of Gabby from the officers’ body camera footage and recapped the statement she made.

For one, Gabby was heard telling the officers, “He, like grabbed me with his nail and I guess that’s why it looks…definitely I was cut right here [points to cheek] because I can feel it. When I touch it, it burns.”

Screenshot from body camera footage showing Gabby Petito describe an altercation between her and Brian Laundrie.

When asked about marks on her skin, she also told the officer Brian grabbed her arm. 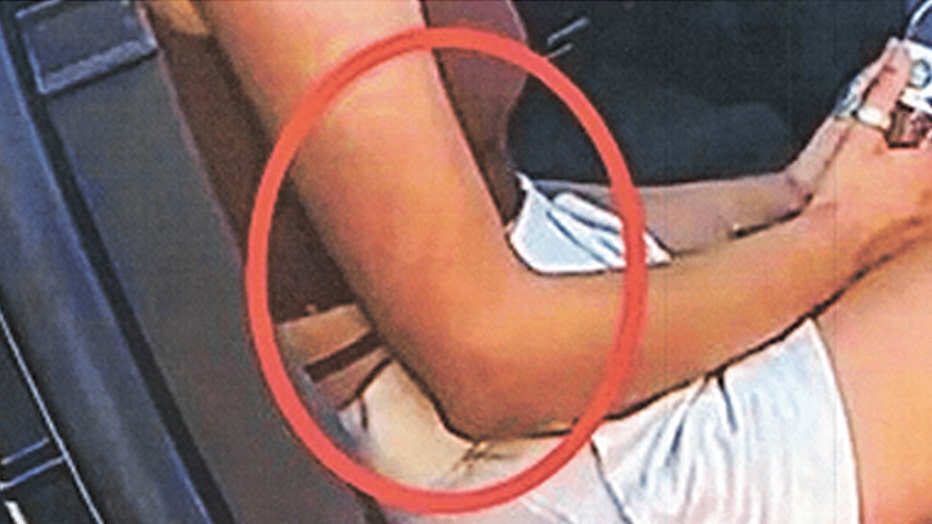 In the wrongful death lawsuit, attorneys circled an area where marks were left on Gabby Petito’s arm, they said. The original image was captured on Moab City police body camera footage.

“An additional photo taken at the time, which has not yet been released publicly, showed a close-up view of Gabby’s face where blood is smeared on her cheek and left eye,” according to the lawsuit. “The photo shows that Gabby’s face was grabbed across her nose mouth, potentially restricting her airway.”

In regards to the agency’s “high turnover, lack of leadership and dangerous mismanagement,” attorneys cited past news articles, including officers drinking on the job with minors and misusing body cameras.

In July 2021, Gabby and Brian embark on their cross-country trip, first driving from Florida to New York before heading west. They were traveling in Gabby’s converted camper van, a white 2012 Ford Transit van with a Florida license plate, and documenting their journey on YouTube and other social media platforms.

On Aug. 12, 2021, the pair gets into some type of altercation in Utah. A witness called police reporting a possible domestic violence situation between the two, prompting a response by area police. While the report and video show possible mental health concerns and tension between the two, officers ultimately determined the events did not add up to chargeable crimes. They also took steps to separate the pair for an evening in an effort to prevent escalation.

“We decided to take the path less traveled on the other side of the arch,” she wrote in part in the caption.

one week later, on Aug. 19, 2021, A video uploaded to YouTube on Aug. 19 titled “VAN LIFE | Beginning Our Van Life Journey” highlights the couple’s travels in their converted camper van. The 8-minute video, on their channel called “Nomadic Statik,” shows the pair in various locations on the California coast, driving through the salt flats in Utah, tent camping and cooking meals in their converted camper van.

near the end of August, Petito’s regular contact with her family stopped. The last confirmed sighting of Petito was when she checked out of the Fairfield Inn and Suites on Aug. 24 in Salt Lake City, according to reports.

Her mother said she last saw her daughter over Facetime around the same time that Petito and Laundrie were believed to have left Utah for Grand Teton National Park in Wyoming.

Front Aug. 25, 2021, Nicole Schmidt, Petito’s mother, speaks to her daughter for the last time on the phone. Petito said they had stopped in Grand Teton National Park in Wyoming before a planned trip to Yellowstone. On this day, it was also Gabby’s final Instagram post, featuring several photos of her standing in front of a mural wall.

Two days later on Aug. 27, 2021, Schmidt receives a text message from Petito’s phone, which states: “Can you help Stan, I just keep getting his voicemails and missed calls,” according to a search warrant later filed and made public. This is later referred to as an “odd text.”

“The reference to ‘Stan’ was regarding her grandfather, but per the mother, she never calls him ‘Stan.’

Brian arrives at his parents home in North Port on Sept. 1, 2021 – without Gabby, but with her camper van. Ten Sept. 10, Gabby’s father, Joseph, was involved in a “public service” incident at the Laundrie home, according to heavily redacted police reports.

William and Charlene Guthrie told to Fox News they noticed the Laundries had gotten a new camper attachment for their pickup truck and were loading it up, presumably for a trip about a week into September.

READ: Attorney confirms Laundrie family camped together but ‘they all left the park’

The next day, the Petito family files a missing person report in New York. Brian refuses to speak with investigators. He was named a person of interest on Sept. 15.

Body camera footage from the couple’s encounter in Utah is released on Sept. 16. Gabby’s remains were found on Sept. 19 in the Bridger-Teton National Forest.

During this week, Brian’s parents reported him missing, and a search is launched to find him. On Oct. 20his remains were located, along with a notebook.

The first public glimpse of a confession Brian Laundrie left in a notebook in the Florida swamp where he killed himself last year reveals his final words.

The North Port police chief admitted to “human error” during surveillance of the Laundrie house. He said his department “made a mistake” on Sept. 15 when they thought they spotted Brian outside of his parents ‘home in North Port – only to learn at a later point that it was actually his mother, Roberta.

READ: Gabby Petito’s family gets matching ‘Let It Be’ tattoos she designed

In MarchGabby’s parents filed a lawsuit against Brian’s parents, claiming they knew their last murdered their daughter.

it wasn’t until June that the contents of Brian’s notebook were made public.

“I ended her life,” reads the note. “I thought it was merciful, that it is what she wanted, but I see now all the mistakes I made. I panicked. I was in shock.”

Brian wrote that he chose to end Petito’s life after she injured herself when she fell in Wyoming. He also wrote: “From the moment I decided, took away her pain, I knew I could n’t go on without her.”

The lawsuit against the Laundrie parents will go to trial next year.

A Sarasota County judge has decided to move forward with the argument against Brian Laundrie’s parents, which claims they knew their last murdered Gabby Petito as authorities were searching for her.