(April 26, 2022 / JNS) In the middle of Israel’s barren Arava, more than an hour’s drive from a major city, a diverse group of over 1,200 university students from Africa and Asia have gathered to learn the latest in agriculture technologies from local farmers.

The courses are being offered at The Arava International Center for Agricultural Training (AICAT) in Sapir, a Jewish National Fund USA project. AICAT is one of many Jewish National Fund projects in the area under the aegis of the organization’s “Blueprint Negev” initiative, which aims to improve the quality of life for all residents of the region and encourage a population shift away from crowded, expensive central Israel .

On Sunday, the Jewish National Fund led a media tour of the Arava to showcase some of these projects, and to provide access to the area’s pioneering farmers, who are currently producing some of the highest quality produce in the world, both for domestic consumption and export.

The AICAT students introduced to the group were from countries including Kenya, Cape Verde, Cambodia, Thailand and Gambia, and even nations that do not have diplomatic relations with Israel. The learned of those countries apparently realize the importance of these young future farmers being able to share what they have from the Jewish state.

Students from countries in Africa and Asia at The Arava International Center for Agricultural Training in southern Israel, April 24, 2022. Photo: David Lange/Israellycool.

As one of the students from Kenya shared with the journalists, “We’re not only learning about agriculture, but the program helps change our mindset and teaches us to see projects through to completion. AICAT is not just providing us with education, but creating future leaders.”

Following the school’s 10-month diploma program for undergraduates and an 18-month masters program, students then complete their university degrees in their home nations.

Just several miles away from AICAT are the Central Arava Research and Development Center and Vidor Visitor Center, adjacent to Moshav Hatzeva. The R&D facility is a leading scientific research and development center, established in 1986 with the aim of developing and advancing new materials, raising the quality of produce, finding new crops and opening new markets.

In recent years, alongside extensive research in agriculture, a strong scientific research division has developed at the center, focusing on molecular biology, drug discovery, biotechnology, ecology, geology and more. 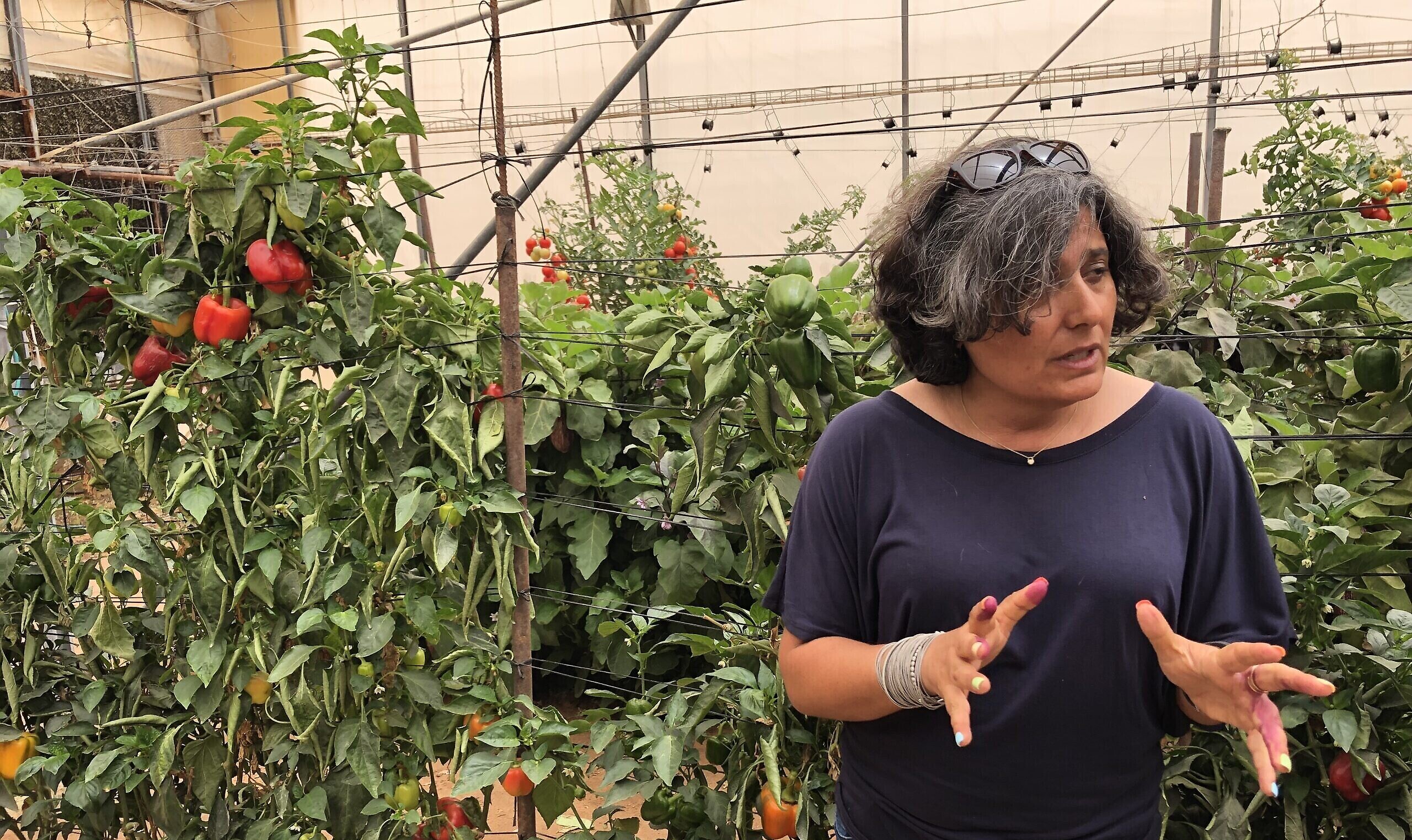 Ma’ayan Kitron, flowers and herbs research coordinator at the Central Arava Research and Development Center in southern Israel, takes journalists on a tour of one of the hothouses run by the center, April 24, 2022. Photo: Josh Hasten.

Kitron told JNS that Arava farms produce some 55% of the country’s agricultural exports. However, she said, there is currently a lot of competition in the region, with countries like Morocco and Turkey making waves in the agriculture arena. This, she said, was causing local farmers to consider cultivating alternative products, such as dates, traditionally found in Israel’s Jordan Valley further north.

Kitron also talked about the challenge area farmers face with regard to water; the Arava region receives less than 50 millimeters (2 inches) of precipitation a year.

Farmers are forced to drill wells 1.5 kilometers (nearly one mile) deep, she explained, after which a carefully calculated desalination process takes place, as the salinity level of the water affects the quality and taste of the produce.

Kitron offered each guests samples of various common and exotic fruits and vegetables, clearly demonstrating why Arava produce is in high demand.

Bordering the R&D Center is the Kasser Joint Institute for food, water and energy security, a collaboration of the Jewish National Fund, the University of Arizona and the Arava regional councils. The institute develops tools, methods and programs to aid communities in arid and hyper-arid environments, with a focus on Africa.

Over the next three to five years, the institute plans to establish at least three multidisciplinary programs in Africa to provide technology transfer, applied research, knowledge, training, ongoing guidance and education.

In fact, Tania Pons Allon, the institute’s director, told JNS that she and her colleagues plan to travel to Kenya this July on a pilot trip to explore what the country’s immediate needs are. 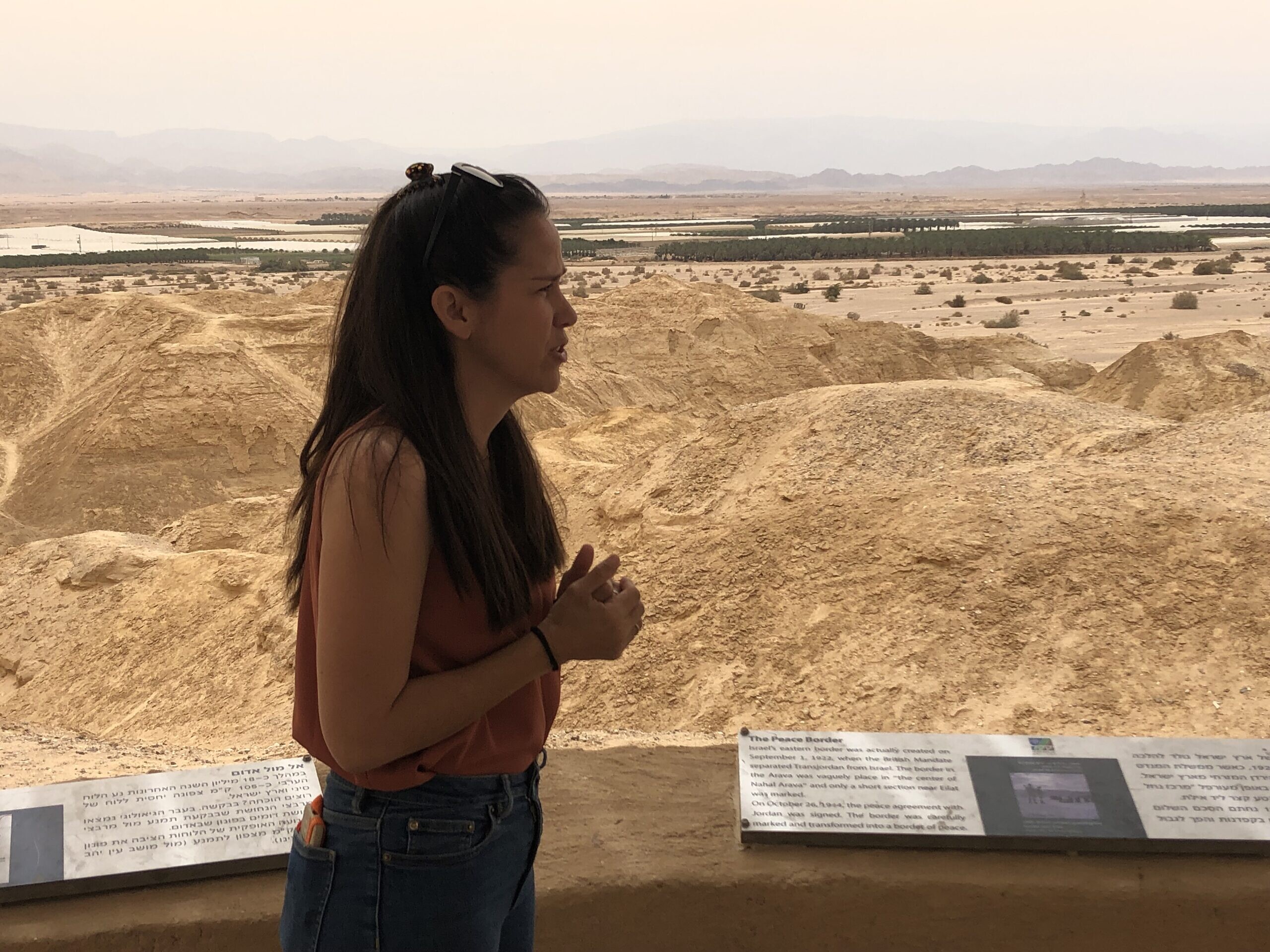 “The idea is to take the technology and the knowledge accumulated in the Arava and the University of Arizona and try to implement them in vulnerable communities in developing countries where they suffer from energy poverty and food and water insecurity,” she said.

“It’s really about giving back and being a light unto the nations and ‘tikkun olam’ [repairing the world],” she added.

One of the institute’s current projects involves shielding crops with solar panels during their growth, which Pons Allon said allows a farmer to “grow food using less water since there is less evaporation. The reduction of temperature under solar panels makes them [the crops] more efficient, while the panels reduce the radiation the crops are getting.”

She said that at the same time, the energy generated by the panels can be used “to desalinate water or pump water … so it’s a win win.”

Yael Levontin, PR and Communications Manager in Israel for Jewish National Fund USA, who organized the Arava visit, summarized the importance of the Arava region for Israel.

“Even though the Arava’s border with Jordan is a peaceful one, it is defended not because of tanks but because of groves filled with palm and pomelo trees. It’s because pioneering families live on the land and cultivate its soil. The greatest threat to the land today is Mother Nature. That’s why Jewish National Fund-USA has made significant philanthropic investments in water infrastructure, environmental R&D, and agricultural training.”