In anticipation of the premiere, Jerry Apps spoke with PBS Wisconsin about his childhood and the setting for this television special.

PBS Wisconsin: What was it like working with your daughter on this project?

Jerry Apps: I’ve worked with Sue on other projects. We’ve done books together. The book that’s the background for this show, Old Farm Country Cookbook, was one that Sue and I had done together. She’s an elementary teacher here in Madison and she also is an author of several other books, so it was a pleasure to work with her.

And in fact, she had a very important role in writing the cookbook because she tried nearly all of the recipes and that’s a bit beyond me.

PBS Wisconsin: This cookbook is as much about sharing the stories as it is about the actual recipes. Can you talk about how you approached writing this book with Susan?

Apps: I was born during the Depression in the 1930s. We had, compared to today, very little. My mother did all of her cooking on a wood stove without indoor plumbing or electricity. And when she passed away in 1993, we found her old recipe box — the one that I remembered her using when I was a kid. And in working with Kate Thompson from the Wisconsin Historical Society Press, the family thought, especially Susie and I, that there might be a book here because this is a fairly unique situation compared to today.

We decided to organize this book a bit differently than the typical cookbook that has some main dishes and desserts and all that kind of a thing. Let’s organize the book around stories. And so I, of course, was in charge of writing the stories from my memory and from chats with my two brothers. And then Susie’s role was to take the recipes and translate them. 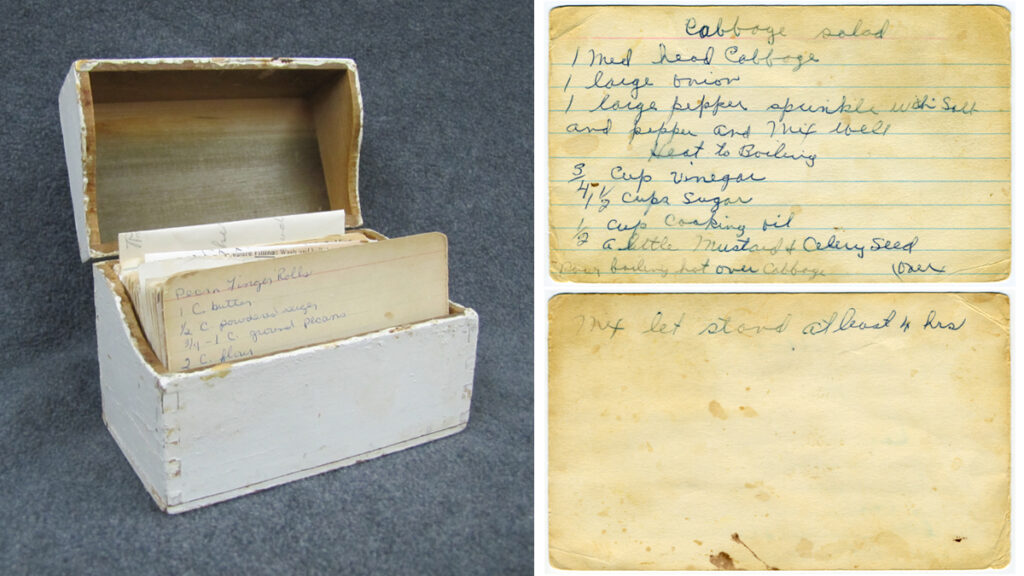 Apps: My mother’s recipes were short on directions. She was of a mind that anybody who knows anything about cooking at all, they would know what to do. She would list the ingredients, and that’s about it!

So, of course, Susie spent an enormous amount of time taking each recipe and translating it into the language of today. For example, my mother’s oven had no thermometer so there were no degrees mentioned.

I imagine my mother would have said, “Well, anybody who knows anything about cooking knows how to use a wood stove oven, for heaven sakes!” And we would have looked at her and said, “Well, yes. But, Mom, how do you know when the oven was the temperature that you could use to bake bread?” And she would say, “Oh gee, everybody knows that! You open the door and put your hand in!” 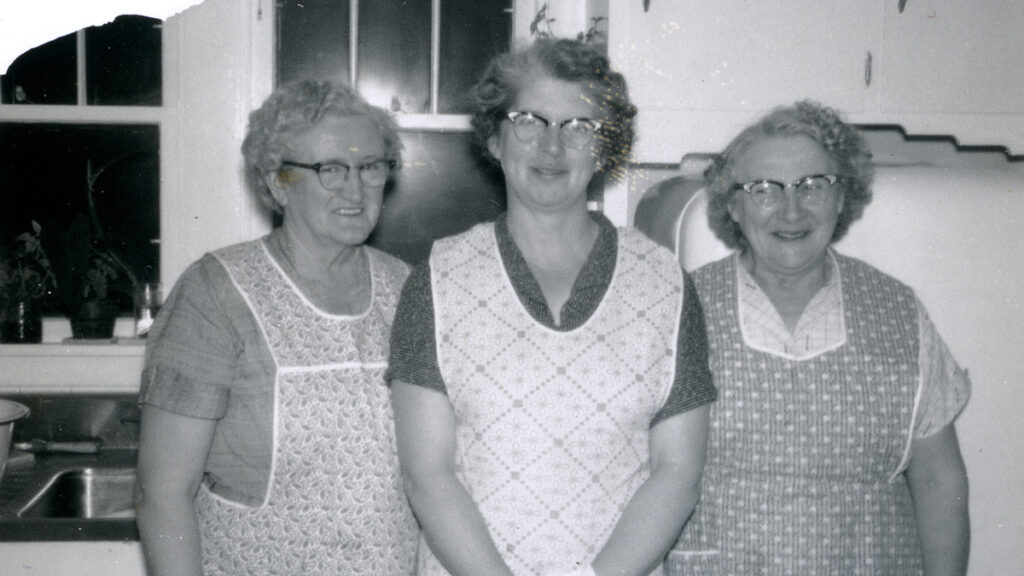 Eleanor Apps (right) with her sisters on Thanksgiving, 1959.

PBS Wisconsin: Sounds like she was a pretty intuitive cook.

Apps: For my mother, cooking was as much of an art as anything because she knew what a pinch was and she knew how to add ingredients to taste — she knew what the temperatures were in the oven by merely putting in her hand.

She also knew the difference between the heat that pine wood would create compared to oak wood. Most people aren’t aware of the knowledge that farm women needed to have in those days. And we had those different kinds of woods, because my dad knew that as well.

And she would mix those two types of wood, and that’s how she controlled the heat. She she had to recognize from the bark of the wood, what kind it was, and then know what to expect in a way of heat. That’s some of the knowledge that the cooks of that day knew that today the modern day cook would say, “What?!”

PBS Wisconsin: What would your mom say about this cookbook being published? 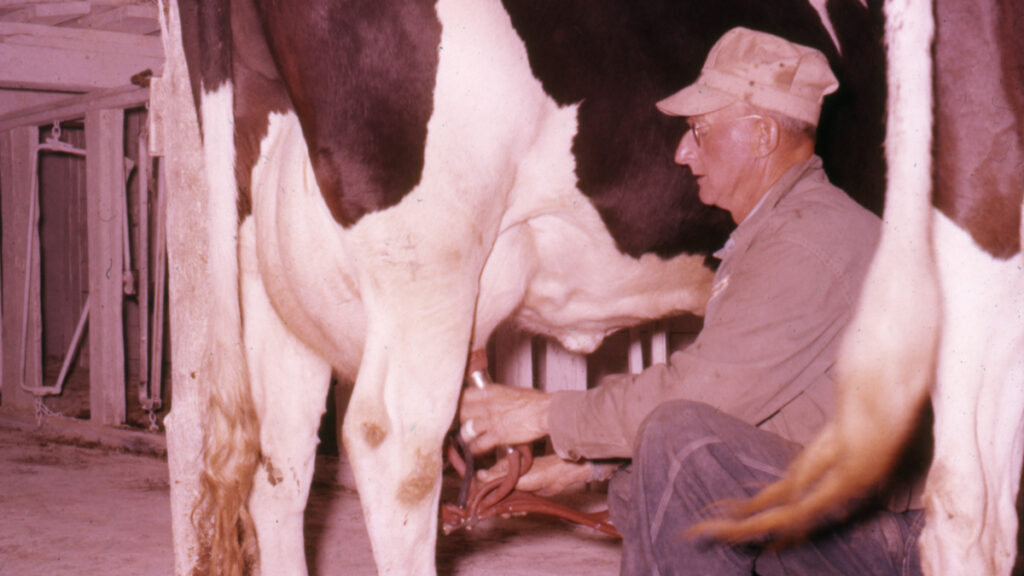 PBS Wisconsin: What sets dairy farmers apart from other farmers?

Apps: The early dairy farmer had to be present at the barn twice a day for 365 days of the year. There were no vacations. When we would see some people who we’d call “tourists” in Wild Rose, my dad would say, “You gotta feel sorry for those folks. They don’t have enough work.”

He would have us believe that because we were working every day of the year that work’s a good thing! We ought to be proud of that, and in fact he was. So that’s one of the things that set dairy farming apart from crop farming, for example, where you could go off and do something else.

I don’t know how many people realize that the dairy farm that I grew up on — and there were hundreds of them at that time — required that kind of devotion. I’ve spoken to many, many groups over these last 40 years, and I’m surprised how many people will ask me, “You mean you had to milk those cows on the weekends? Or on Thanksgiving, and on Christmas?” Yes, you did! That was part of the deal, and yet my dad would say that he loved it.

That part troubles me. I can’t quite understand that, because he liked to do a lot of other things as well, but when it came five o’clock, by golly, whatever else we were doing, we were back home getting ready to milk the cows. 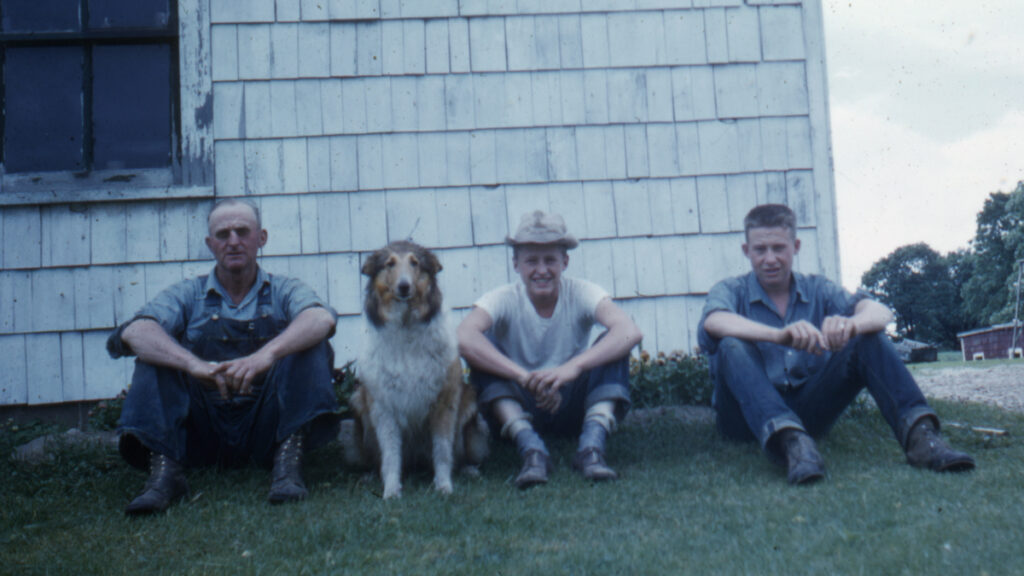 Jerry Apps (middle) with his father (left) and brother (right).

PBS Wisconsin: It’s incredible how much dedication that required and how much the family was connected by this shared work.

Apps: The positive thing about all that, as a kid growing up in that time, is that we learned responsibility. We learned how to work. We learned to show up on time. And these translated into values ​​that many employers really enjoyed.

I will never forget, when I was in college, one of the summer jobs I had was working at a pea cannery and I was to be the supervisor at the vinery. I was 19 years old, and the boss looked me over and he said, “Are you a farm kid?” and I said yes. “Do you have a crescent wrench?” I said, “No, but I can borrow one from my dad.” And he said, “You’re hired.” That’s all he wanted to know!

It speaks volumes to me as I reflect on it today. I thought, “What’s with this guy, can’t he find anybody to work?” But the farm kids had these values ​​that came without anybody ever saying, “Here’s the values ​​that you should have.”

They have negative dimensions, too. I’m an old guy and I still work at least a half a day, every day. Sometimes I take off on Sunday. And my wife thinks I’m crazy and all the people around me think I’m nuts. We’re at a retirement center right now and I’m the only one that’s working all the time. Part of that comes from my growing up on a farm where, if you were not contributing, then you were a detriment. No one ever said it that way, but that’s how I understood society.

My dad would put it another way. This I remember from him often, and he said this to me one time when he was 92 years old. I said, “Pa, how are you doing?” He said, “I’m doing the best I can with what I’ve got.” That’s a fantastic message. 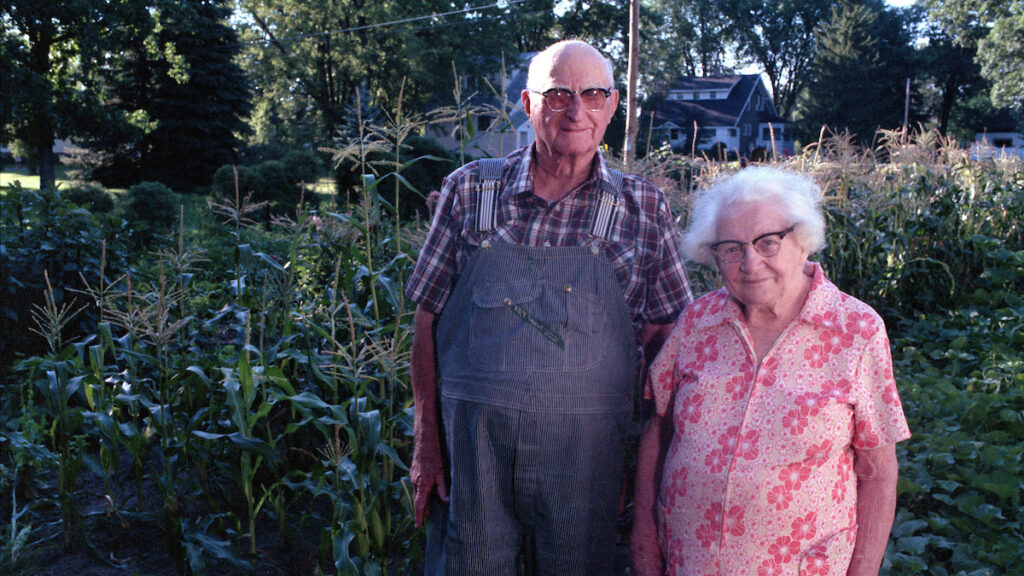 PSB Wisconsin: Do you think your mother was as satisfied as your dad was on the farm?

Apps: I think so. Tell you the truth, I never heard her complain. She had every right to complain, my gosh! The stove would go out when it shouldn’t have. The wood was too wet and would sizzle and wouldn’t bake the bread well. And she had some kid — me! — who didn’t show up to carry the wood.

On the educational level, neither of my parents graduated from eighth grade. My dad left fifth grade. My mother left in seventh grade. That’s the negative side of what went on during that time, because when you were old enough, or big enough, that’s when you were pulled out and you went to work.

My mother would say, sometimes, “I wish I had been a teacher.” She didn’t realize that she was a teacher, just not in a formal sense. 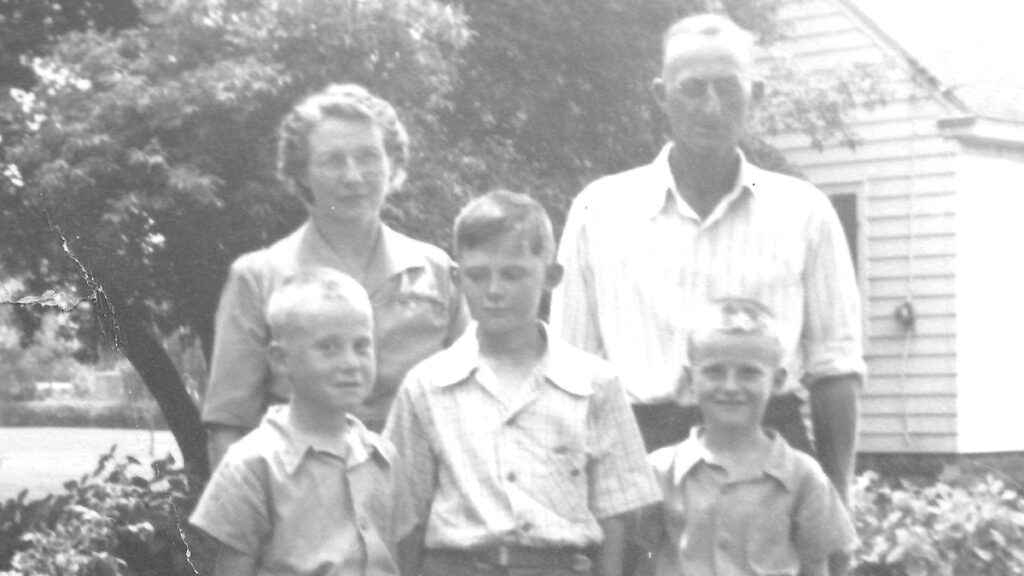 The Apps family on their farm.

PBS Wisconsin: How do you envision the legacy of your work as an author and a speaker?

And right now I’m working on how we can better bring rural and urban America back together because never has the split been wider. And we cannot go forward as a country, as a nation, as a people, unless we realize that we depend on each other tremendously. I just published a book on the history of county and state fairs. I concluded in the book that the fair is one way to bring society back together again. It’s one way to help urban people understand what farm life was like, and I think it’s so important.

Who knows what people are gonna think of my legacy, but I would like to believe that first, everybody has a story to tell. And stories are one way to help bring us back together.