YEREVAN, SEPTEMBER 12, ARMENPRESS. Have you ever wondered how astronauts shave, shower, brush their teeth and do other activities which don’t require any special efforts here on Earth?

Up in space, in conditions of microgravity, you simply won’t be able to wring a wet towel, and for having a comfy sleep you won’t even need a mattress or a pillow. And if you happen to get emotional and start crying in space, then you better hurry and wipe your tears with a napkin because otherwise the tear drops will accumulate and hinder your vision – since the weak gravity won’t let them pour down.

It was thanks to Canadian astronaut and former commander of the International Space Station Chris Hadfield that the daily lives of astronauts became accessible and visible for us here down on Earth.

Hadfield, the first Canadian to perform extravehicular activity in outer space and who spent more than 160 days in space, showed with his numerous compelling videos what it is like in orbit.

ARMENPRESS had a unique chance for an exclusive interview with Commander Hadfield to discuss space and the future of space exploration, human fears, music and arts.

ARMENPRESS: What inspired you to become an astronaut?

Chris Hadfield: First it was Science fiction. Comic books, and then books by Arthur C. Clarke, Robert A. Heinlein, and Isaac Azimov – science fiction authors. Then it was science fiction on television, with Star Track, and then in the movies with 2001: Space Odyssey. But what really turned it from fantasy into fact was that people were really going to space for the first time. Gagarin and then Alan Shephard, and then John Glenn and Aleksey Leonov. It turned fantasy into a possibility. The summer of 1969 I was almost 10. That’s when they walked on the Moon. And that was the trigger for me. I saw that people had organized themselves to go to something that used to be just fantasy. I thought – wow, if that’s possible, that’s what I wanna do. But Canada at that time we didn’t have astronauts, we didn’t have NASA, we didn’t have a space agency. But I thought things change, and I’m just gonna start getting ready. So I decided to be an astronaut on July 20th, 1969- the day they walked on the Moon

Chris Hadfield: Moments aren’t scary, just sometimes people are scared. Moments are just moments, it’s up to us whether to be scared or not. People are almost always scared when they are not prepared for something. If you’re not ready for something, then you’re scared. But if you’re ready, then you are not scared. The event doesn’t care. Like if you’re learning riding a bicycle, the bicycle never changes, but when you learn, you’re no longer scared. So space flights are just like riding a bicycle. If you know how and you study, even though it’s dangerous, you don’t need to be scared. So the most dangerous part of my spaceflights was launch. My first launch of the shuttle … the odds of dying were 1/38…. That’s better odds. But I trained for my whole life, as an engineer, and a fighter pilot, then a test pilot, and trained for years as an astronaut. And so even though it was the most dangerous thing I’ve done in my life, I had a lot more going on for me than just being afraid. And Space walking is dangerous, but it’s also magnificent and spectacular. And I’d much rather go through life ready for things, than scared. So I was never scared in space, but it was really dangerous. 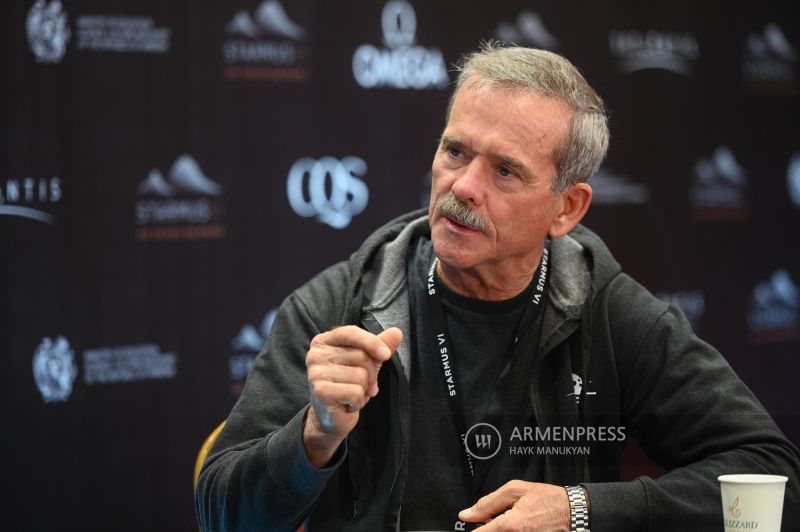 ARMENPRESS: What was it like to see Earth from outer space for the first time?

Chris Hadfield: It’s overwhelmingly beautiful. You can see so far. From overhead Yerevan you can see all of the Alps, you can see Copenhagen, you can see Rome, you can see Moscow- in one glance of the window. To be able to see so many things, it’s stunningly beautiful. At first all you can really see is what you expect to see. You look for touchstones of familiarity, you look for things that you know, because then you can start to try to rationalize everything else. But I’ve been around the world 2650 times or something. So every time you come around the world, you get better and better and better at looking at it. Until by the end, you, like, have a relationship with the world. And you really get to see the beauty. The world is generously, overpoweringly beautiful. And I’m very lucky to see it the way that I have.

ARMENPRESS: Where will space exploration take the humanity in coming decades?

Chris Hadfield: Well we’ve just put the James Webb space telescope up right now and it’s looking way back in time. It’s looking back to just 250 million years after the Big Bang. We’ve found a galaxy, A GALAXY! Billions of stars that have already formed just 250 million years after the Big Bang. We can see that. So when you ask where space travel is taking us, it’s taking us right back to the beginning of time. It’s also taking us beyond the depths of our understanding. It’s gonna also take us to find out if we are alone in space or not, alone in the Universe or not. Is this the only life there is? Is there any other intelligent life anywhere? We don’t know the answer to that question right now. And we’re not going to be able to answer it by just sitting around. But we’re drilling on Mars right now to try and find fossils. And the James Webb Telescope can actually analyze the atmospheres of other planets. So if we can find an atmosphere that shows industrial production, then there’s a really good chance that there’s intelligence life there. Mostly, it takes us to an unending voyage of discovery. Discovery about how everything works, and therefore discovery about ourselves. And it teaches us a huge amount about the Earth. How does the Earth work as a close system, as a spaceship taking care of us all. What’s the history of it? Why is Venus so different? Why is Mars so different? Why is our planet like the way it is? And what’s important in order to keep life healthy on Earth? Space flight does all of that for us. 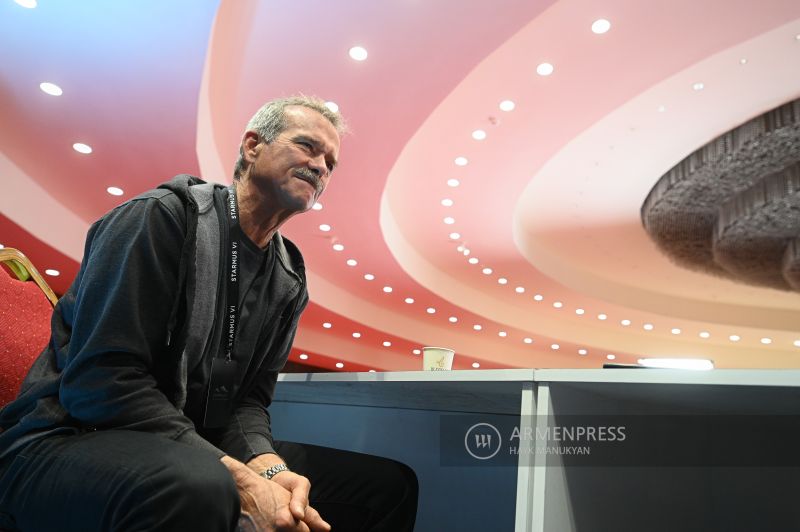 ARMENPRESS: What would you say to the young people who want to engage in Space exploration?

Chris Hadfield: I think it’s really important to be curious. But not just to be curious like a 2 years old who just says why? Why? Why? But to actually work hard to understand the answer to your curiosity and make the answer part of who you are. Because the more things that you understand, the greater capability that you have. And also the more clearly you’ll see the world around you. So I think number one it is really important to be perpetually curious about how the things work. Second is you need a healthy body to fly a long way from the hospitals, a long way from doctors. You need to keep yourself healthy. And that’s a personal choice. You get to choose everything you eat. And you get to choose how much exercise you get, so keep a healthy body. Third is you need: spaceships are complicated and technical, so you’re gonna have to plan on understanding how technical things work. So an advanced technical education. But you want that anyway, it’s an advanced technical world. But I think the last thing is to learn how to make decisions and stick with them. It’s easy just to say “Ah”, and blaming somebody else, it’s above my pay grade… or whatever. But anybody, no matter how young, can start making decisions and sticking with them. Like it just became September: You can say – ok, everyday on September I’m going to do 100 push-ups, or every day on September I’m going to learn 5 words of Japanese, or every day in September I’m gonna eat five Big Macs. By the end of September you will be a different person. And it’s really important to learn that you can change who you are in one month just by making decisions and sticking with them. So think what you can do with your whole life. And if you wanna fly rocket ships and you have to know how to make decisions and stick with them.

ARMENPRESS: What do you consider the greatest scientific achievement of the 21st century?

Chris Hadfield: Gosh…there’ve been so many. I think probably the way that we communicate in the internet is our greatest achievement. Our level of sharing a thought is unprecedented in human history. The pace of invention is accelerating because we can share our thoughts and our inventions so easily around the world. Our ability to problem-solve is higher than it’s ever been. So I think communication has been our greatest invention so far in this century because it enables us to do so many other things. 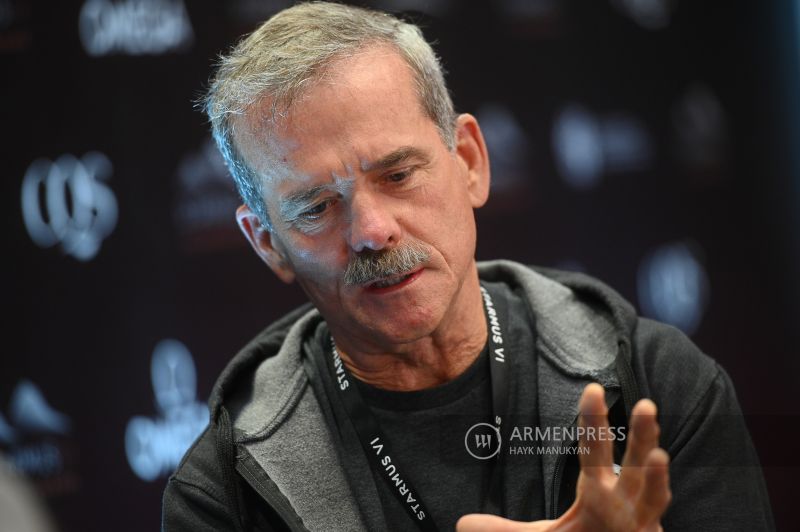 ARMENPRESS: Your performance of Space Oddity in Space was so memorable. If you had given a chance to perform another song in Space, what it would be?

Chris Hadfield: I’ve written and recorded an entire album of music in space. I did a song called “Is Somebody Singing?” and I performed it live from Space with seven hundred thousand students simultaneously. Students from all across Canada and all around the world simultaneously sang that song with me. SEVEN HUNDRED THOUSAND STUDENTS AT THE SAME MOMENT! All singing the same song. And it’s a song about ideas and being a better person and how to turn yourself into what you’re dreaming of. I wrote that song with a famous Canadian band, I co-wrote it with their lead singer Ed Robertson. That was a lovely way for people to share in their experience of what was going on. And that’s what music is. Music is just another way to communicate. You can make somebody cry just by playing music. You can make somebody laugh. Even though you don’t speak the same language as them. It’s art, that’s why I wrote music on the space ship and recorded music and played music. I know hundreds and hundreds and hundreds of songs, I play with symphonies, I tour with a band. We played in Texas last month. So music goes with me everywhere, even when I’m in Space. 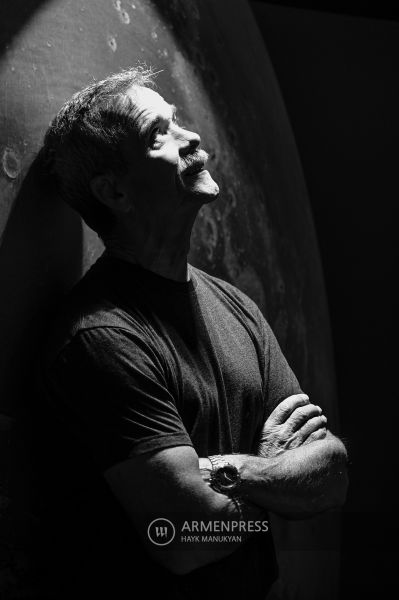 ARMENPRESS: What did you miss most on Earth being on International Space Station?

Chris Hadfield: I don’t spend my life missing things. I spend my life trying to pay attention and enjoy where I am. You can spend your whole life wishing you were somewhere else I guess but it just seems like a crazy way to live.

Sometimes I miss people, especially the ones who died young. I miss some people, I wish they were still here. But I don’t miss things. It’s not that everything that you can ever want is on board the spaceship but you don’t spend your time on a spaceship wishing you were somewhere else or missing some stuff. There’s food, there’s water, there’s air, the entire world is pouring by every 92 minutes and you’re weightless and you are doing 200 experiments. And if you look the other way, you’re in the Universe. I didn’t spend any time missing things.