CHICAGO – Welcome back to “MasterChef” recaps! In episode 10, “Cooking for Horse Town USA,” the fourteen remaining chefs sweat it out in a team challenge to feed 101 cowboys and cowgirls. Miss a week? you can read our recaps and watch On Demand, on FOXNow, on Hulu and ten Tubs, FOX’s free streaming service. This television station is owned by the FOX Corporation.

Previously on “MasterChef: Back to Win”

Last week, the chefs struggled through a French patisserie-style challenge, picking their own elegant desserts to replicate perfectly. No interpretation, no spin, just sheer technical finesse. Some chefs fare better than others, with former “MasterChef Junior” contestant Dara winning out with her flawless recreation of a beautiful berry chiffon cake. But Bri, Shelly, and Tommy all fell flat with their messy confections, and Tommy put up his apron after a horrid lemon meringue tart. 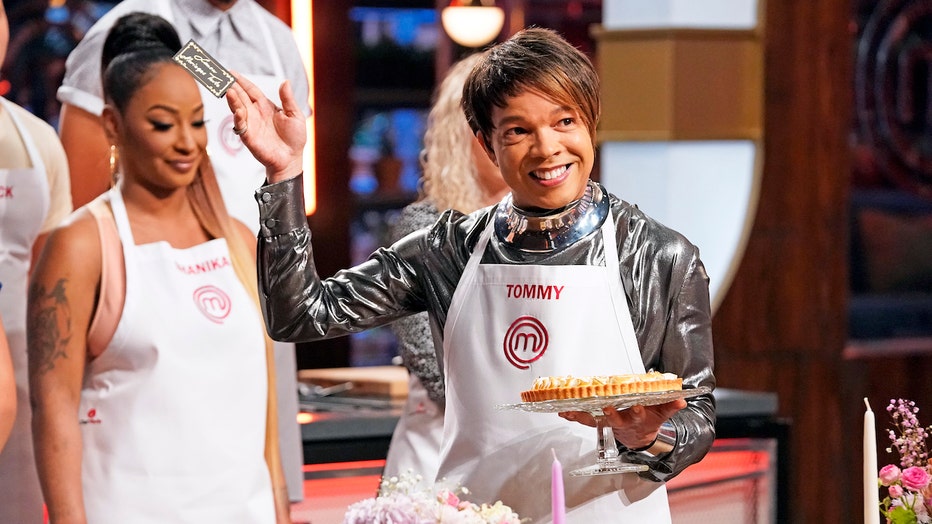 “MasterChef: Back to Win”: A haute cuisine hoedown

After the shellacking the chefs received in last week’s dessert challenge, the fourteen remaining competitors get to escape the heat of the MasterChef Kitchen… for the sun-drenched climate of Norco, California, otherwise known as “Horse Town, USA.” Priding itself on being a “horse community,” with more horses than cars, it seems, Norco makes for the perfect location for the next “Back to Win” challenge: cooking outdoors for a whole mess of cowboys and cowgirls.

After sitting down for a good old-fashioned rodeo showcase in a sprawling arena, the chefs get their instructions from Gordon Ramsay, Joe Bastianich and Aarón Sanchez, all decked out in their cowboy best. Based on the chef’s comments, Gordon looks like Woody and Aaron like a classic vaquero; for my money, Joe, with his three-piece gray suit, looks like an unscrupulous saloon owner from “Deadwood.” 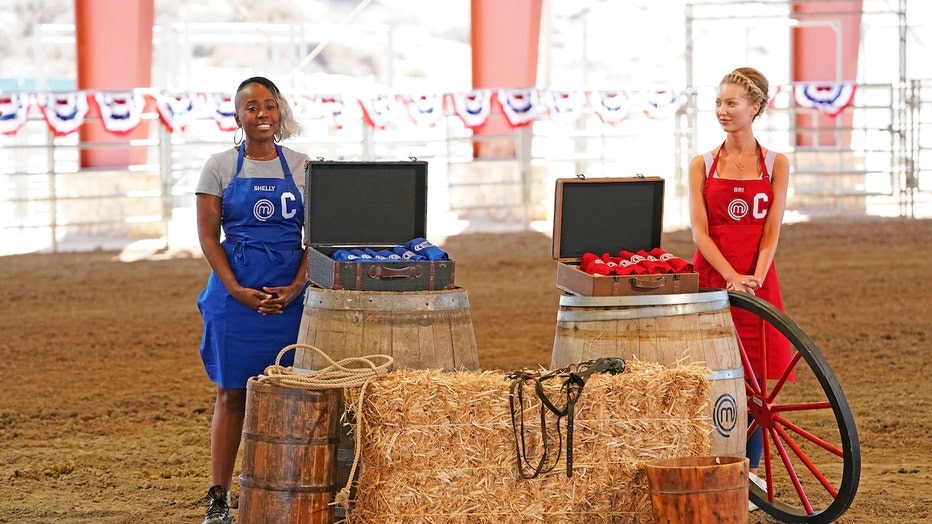 Oh, and there are no lone rangers on the show this week. That’s right y’all, it’s a rootin’-tootin’ team challenge, with last week’s bottom three survivors Bri and Shelly serving as team captains to spur on a redemption of sorts. (While Dara is safe from elimination thanks to her immunity pin, she’ll still have to compete.) Their goal? Cook a hearty steak dinner on some open-flame carbon grills set out in the middle of the arena for over a hundred “cowboys and cowgirls” (cowpersons?) who are hankering for a good down-home meal.

Bri and Shelly pick their teams with clear strategies in mind: Shelly’s picking the strongest cooks and best fits for this challenge (starting with country girl Brandi), while Bri starts picking her friends (hi, Fred!). as the picks keep going, Derrick expresses frustration he’s getting picked near the end; he’s confident on the grill, and it feels personal that Shelly skips him. Still, he ends up on Bri’s Red Team with Fred, Dara, Michael, Gabriel and Bowen, while Shelly’s Blue Team consists of Brandi, Christian, Amanda, Willie, Emily and Shanika. 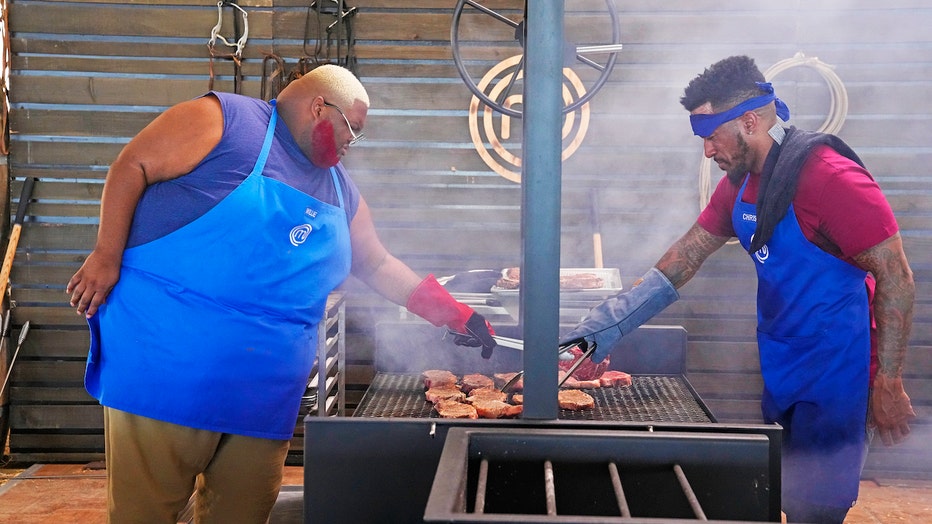 “MasterChef: Back to Win”: Turning up the heat

The teams are off to the races, and already Gordon’s worried about Bri’s team. With her soft-spoken demeanor and tendency to pick people she likes over who might be best, will her strategy win out? The answer, surprisingly enough, is yes, as after a few nervous starts she quickly wrangles Red team into a well-oiled machine (with, yes, Derrick on the grill). Their team settles on a bone-in ribeye with a honey bourbon BBQ sauce, slaw, maple mashed yams, and chipotle grilled corn and get to work.

Blue Team, meanwhile, is starting to suffer from the double-edged sword of Shelly’s picks: they may be the best, most suited chefs for the country-fied brief, but they’re also strong personalities who are quick to clash. A few minutes in, Christian’s already snapping at Shelly for asking him to check the temperature; calm down, bro! “I know it’s coming from a place of passion,” Shelly says in post-challenge interviews, but it’s clear she’s having to spend more time managing personalities than managing the dish.

the initial sample dishes come to the judges, and Red Team passes with flying colors; the slaw could use more spice (and more ratio of cabbage to other stuff), but Gordon says the steak has a “cowboy sear.” Blue Team’s is less impressive; Gordon says the unseared steak could have come from an air fryer, and their idea of ​​doing a compound butter doesn’t seem to fly with Joe.

As the cook continues, the 1500-degree heat from the carbon grills gets to Red Team’s Gabriel, who has to step away from his grilled corn to avoid overheating. That leaves shy, frazzled Bowen to take over, who quickly starts messing up and delivering ice-cold corn because his side of the grill isn’t hot enough. “I LIKE HOT. GRILLED. CORN,” Gordon stresses, surely offending lovers of cold, ungrilled corn everywhere.

In typical “MasterChef” fashion, the diners arrive while our teams are only mostly ready. Blue Team’s first plates are waiting on steaks, which Christian doesn’t want to take off the grill till they’re ready. Red Team, meanwhile, is holding on new batches of slaw; “We’re held hostage by a frigging cabbage,” Gordon whines. Still, the dishes go out, and the diners start eating.

WATCH FREE ON TUBI: Get stressed about risotto in Gordon Ramsay’s “Hell’s Kitchen” — get the app 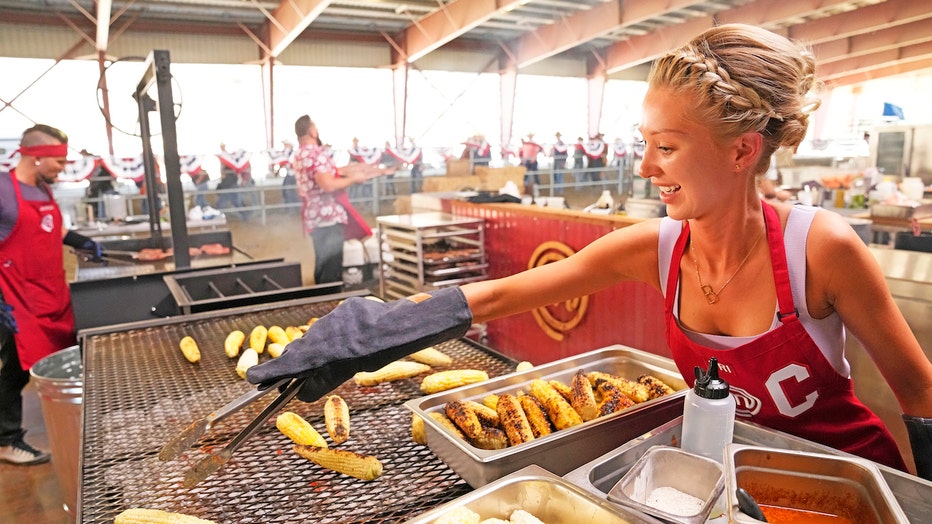 “MasterChef: Back to Win”: Horseshoe theory

As outdoor “MasterChef” team challenges go, this one feels a bit less disastrous than most; sure, there are a few flared tensions and more than a little whining on the Blue Team, but Red Team visibly comes back strong from some corn and yam-related setbacks. The diners think so too; one old cowhand calls their ribeye steak “country,” which may be the highest compliment a cowboy can give a plate of food. On the other hand, Blue Team has a steak sent back for being super raw, though they immediately fix it. Hardly riveting trainwreck TV; the chefs here are just too good! Even the volatile Christian calms down after a bit.

Eventually, the challenge ends, and the diners have to throw a horseshoe to determine which dish they’d pick. Surprising no one, Red Team wins out for their consistent work, strong flavors, and structured team dynamic (way to go, Bri!). The only sour note is Derrick, who stays bitter at Shelly for not picking him (“her choice was personal, and that pisses me off”); he’s a bit of a selfish chef in team challenges, so it’s a good thing he knows how to grill.

But that means someone on Blue Team has to go; with no clear single team member making egregious mistakes, that honor falls to Shelly, whose leadership just couldn’t lasso her team members into a cohesive unit. “We asked for redemption, and the captaincy wasn’t present,” Gordon explains. A tall order, considering all the strong personalities she had to corral throughout the challenge, but it’s a fair decision, and she rides off into the sunset.

Dish of the night

There’s a reason Red Team’s steak dish won; it looked gorgeous. Extra kudos to Dara for the suggestion to rest the bone-in ribeye over the smoky chipotle corn cob, which was a neat bit of plating.

Next week on “MasterChef: Back to Win”

Former “MasterChef” Christine Ha stops by for another mystery box challenge! Let’s hope all the chefs can nail Vietnamese food.

About the writer: Clint Worthington is a member of the Chicago Film Critics Association. He is the founder and editor-in-chief of The Spool, and a Senior Staff Writer at Consequence. You can find his other work at Vulture, Nerdist, RogerEbert.com and elsewhere.

About Tubi: Tubi has more than 40,000 movies and television series from over 250 content partners, including every major studio, in addition to the largest offering of free live local and national news channels in streaming. The platform gives fans of entertainment, news and sports an easy way to discover new content that is available completely free.

Tubi and this television station are both owned by the FOX Corporation.